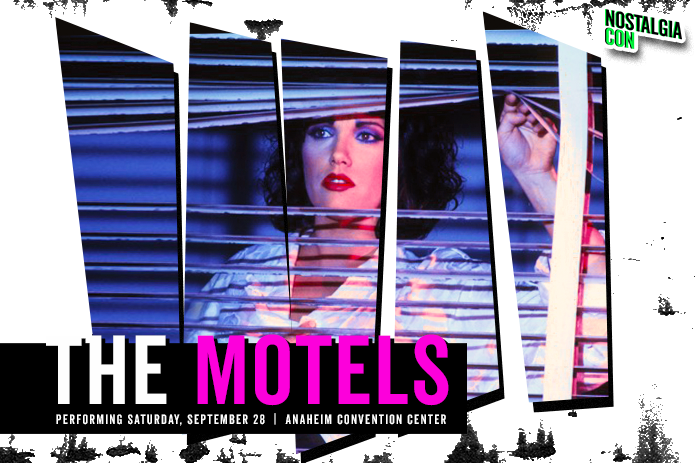 Led by lead singer Martha Davis, The Motels will perform their greatest hits on Saturday, September 28, including their chart-topping hit “Suddenly, Last Summer”, which is being prominently featured next month in the final season of AMC’s ‘American Horror Story’ and “Only The Lonely”, among others.  Davis will also participate in a panel discussing the birth of New Wave music. NostalgiaCon’s concerts are open to attendees who have either purchased a one day pass for a designated concert day or who have paid for the show’s two-day pass.

The first incarnation of The Motels formed in Berkeley, California in 1971, and they were known as the Warfield Foxes. After moving to Los Angeles in 1975, they changed their name to The Motels, signing to Capitol Records in 1979. “Only the Lonely” and “Suddenly Last Summer”, earned Gold Record status, peaking at No. 9 on the Billboard Hot 100, in 1982 and 1983, respectively. In 1980, The Motels song “Total Control” reached No. 7 on the Australian charts (for two weeks), and “Danger” reached No. 15 on the French charts.

To purchase a Saturday, Sunday or weekend pass, visit the show’s website at www.NostalgiaCon80s.com.  To sponsor or exhibit at the event, email [email protected]  The sponsorship and exhibit deadline is September 19.

About NostalgiaCon
With offices in downtown Miami, NostalgiaCon (www.NostalgiaCon80s.com) is a global fan conventions company wholly focused on celebrating the pop culture icons, influencers, music, newsmakers, entertainers, shows, films, sports, fads, toys, foods and more, that fans feel the most fond of. NostalgiaCon is the first platform ever created to fully scale and monetize the decades both in the United States and internationally through conventions, concerts, events, privately licensed entertainment, social media, and more.  On September 28 and 29, the Anaheim Convention Center will host NostalgiaCon, where the 1980’s will be captured in its full glory, capitalizing on the powerful force of nostalgia via the people, trends and moments that define entire generations.