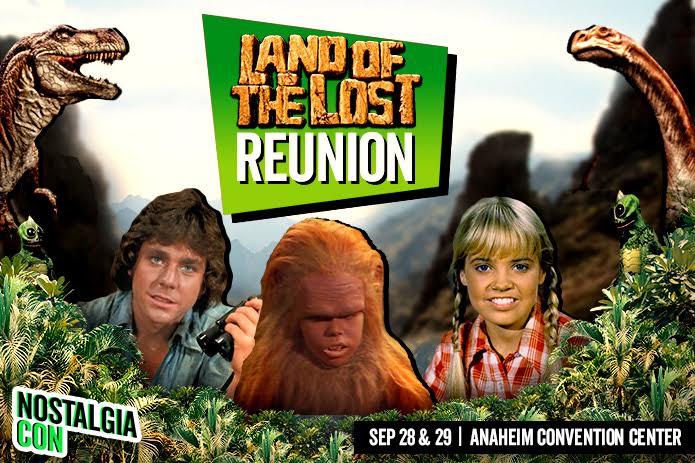 LOS ANGELES, CA – September 3, 2019 – An all-star reunion of “Land of the Lost”, the campy ‘70s show that transported millions of ‘80s kids to the alternate universe of the Sleestaks, dinosaurs, and the Pakuni, is coming to NostalgiaCon’s ‘80s Pop Culture Convention (http://www.nostalgiacon80s.com/) September 28 and 29 at the Anaheim Convention Center.

Wesley Eure (Will), Philip Paley (Chaka) and Kathy Coleman (Holly) are confirmed to speak on Sunday, September 29 and will also greet fans with autograph and photograph opportunities on both days of NostalgiaCon.

“The Land of the Lost” stars join a list of iconic ‘80s stars that already includes Sean Astin (“The Goonies” – “Stranger Things”); Corey Feldman (“The Goonies”); Cary Elwes (“The Princess Bride” – “Stranger Things”); Christopher Lloyd (“Back To The Future” / “Who Framed Roger Rabbit?”); Val Kilmer (“Top Gun” – “Real Genius”); and many others. The two nights of music will also feature all-inclusive concerts featuring such artists as ABC, The Motels, Doug E Fresh, and others.

About NostalgiaCon
With offices in downtown Miami, NostalgiaCon (www.NostalgiaCon80s.com) is a global fan conventions company wholly focused on celebrating the pop culture icons, influencers, music, newsmakers, entertainers, shows, films, sports, fads, toys, foods and more, that fans feel the fondest of. NostalgiaCon is the first platform ever created to fully scale and monetize the decades both in the United States and internationally through conventions, concerts, events, privately licensed entertainment, social media, and more. On September 28 and 29, the Anaheim Convention Center will host NostalgiaCon, where the 1980s will be captured in its full glory, capitalizing on the powerful force of nostalgia via the people, trends and moments that define entire generations.