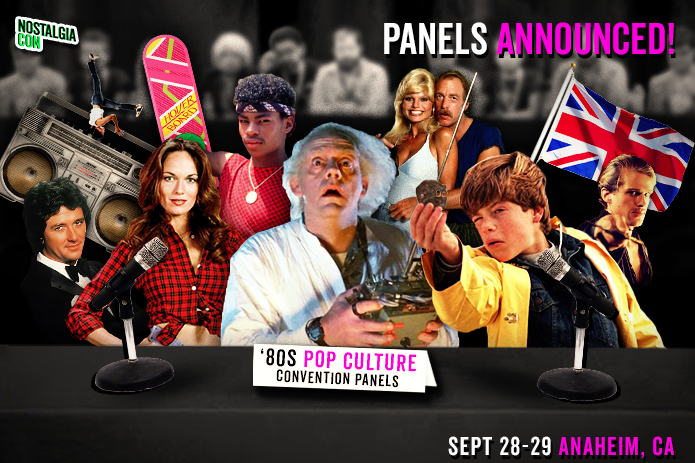 The latest list of music performers is here: http://nostalgiacon80s.com/concerts/.

The first round of the NostalgiaCon schedule will constantly be updated and includes the following:

Musings and Crazy Remembrances from the Original MTV VJs

In the annals of ‘80s pop culture, few individuals can say they impacted an ENTIRE music generation as much as the original MTV VJs – and NostalgiaCon is proud to bring you three of them – Mark Goodman, Nina Blackwood, and Alan Hunter. This is the first time they have EVER appeared at a convention together and oh, have they got stories to tell!

For the Love of Boomboxes: A Retrospective Look at Their Impact in Hip Hop Culture and How to Collect Them

Boomboxes not only helped birth today’s Hip Hop culture, they were also the urban fireplaces for millions of kids who played, danced and made friends with them outdoor from L.A. to New York and many parts in between. In this session, you’ll hear about the impact of these metallic machines, how they evolved and why their footprints are all over today’s Hip Hop culture. “Breakin’” and “Breakin’ 2: Electric Boogaloo” star Michael ‘Boogaloo Shrimp’ Chambers, who gained worldwide fame for creating the liquid animation style of dance, is moderating.

Of Time Travel and Taxis: A Sit-down with Christopher Lloyd

In celebration of the 30th anniversary of “Back to the Future II”, NostalgiaCon is proud to present an in-depth sit-down with all-time ‘80s fan favorite Christopher Lloyd. Join us as we discuss BTTF as well as several of his most iconic role, including Judge Doom in “Who Framed Roger Rabbit?” and Reverend Jim Ignatowski on TV’s “Taxi.”

Breakdancing became such an instant and sustained hit in the ‘80s that it spawned numerous movies, TV shows and fashion trends – some of which continue today. In this session, two of the world’s top hip hop dance innovators, including Michael “Boogaloo Shrimp” Chambers of “Breakin” team up to share the stories behind their enigmatic dances.

They Came and They Conquered: A Fun Retrospective on the Second British Invasion

We might be bias but the Second British Invasion was definitely larger and more over the top with music that spanned EVERY genre and fashion trends that weren’t left behind. New Wave music legend Martin Frye of ABC, Martha Davis of The Motels, and Monie Love join us for a fun and no holds barred look at the last great British Invasion.

‘WKRP in Cincinnati’ Reunion with Loni Anderson and Howard Hessman

If may not have been MTV, but when it came to minting music stars for pop culture, the scrappy sitcom “WKRP in Cincinnati” was notorious for finding some great ones. That’s because everyone who was watching the wacky sitcom about life in a radio station were just as closely listening to the songs the show was spinning and that formula helped bands like Blondie, Devo and The Cars become as big as they are today in pop history. Join us for a retro reunion with stars Loni Anderson (“Jennifer Marlowe”) and Howard Hessman (aka “Johnny Fever”) as they unpack stories about one of the “smartest” and most influential comedies of all time.

No ‘80s kids could survive the decade’s limited TV offerings without watching reruns of the “Gilligan’s Island” sitcom. In this session, we’ll take a “fateful trip” as we sit down with Dawn Wells, who played the show’s pony-tailed country bumpkin Mary Anne.

The ‘80s will be visually celebrated in an epic way with an event-wide cosplay fashion show and competition that is sure to light up social media. This instrumental part of NostalgiaCon is being produced in partnership with the veteran cosplay organization Nerd Mafia. Some of the real celebrities inspiring NostalgiaCon’s cosplay will actually be in attendance at show.

The show will feature an ‘80s Car Show with some of the most iconic vehicles of films and real life, including the Delorean from “Back to the Future” and an Ecto-1 from “Ghostbusters.” The car show runs both days of the event.

NostalgiaCon will see the debut of the National Boombox Museum, one of this year’s shows most iconic exhibitions and one that will feature many of the decade’s coolest music machines. The museum will operate both days of the event.

ABC and The Motels are confirmed to perform for an epic ‘80s pop culture night of New Wave Music. More music news to come!

Max Headroom is the Original Meme and That’s the T-T-T-Truth!

Every single meme in existence today owes its life in one way or another to Max Headroom (Matt Frewer) and you can take that to the b-b-b-bank! When Max Headroom entered popular culture in 1985, no one knew what to make of the stylish, stuttering, digital character. Max Headroom would go on to star in his own TV show and would even become the celebrity character that launched the short-lived launch of New Coke. Matt Frewer will unpack everything you’ve ever wanted to know about Max Headroom and we can’t w-w-w-wait!

The Sugar Hill Gang may not have given birth to Hip Hop but they sure introduced something wonderfully strange to the world in 1980, when they catapulted Hip Hop worldwide with their smash hit single “Rapper’s Delight”. This is the story behind THE song story that helped make Hip Hop what it is today.

If the ‘80s is the Decade of Decadence, Greed and Puffy Hair, no top-rated show exemplified the over the top style attitude and selfishness better than “Dallas”. Patrick Duffy (Bobby Ewing), Linda Gray (Sue Ellen Ewing), and Charlene Tilton (Lucy Ewing) unite to dish on one of the “dishable” shows of them all and, yes, they’ll make JR proud.

Origins of the Black Action Hero: A Conversation with Taimak, Star of ‘The Last Dragon’

Even though “The Karate Kid” was a larger commercial success, the ‘80s also gave us another martial arts champion icon with Taimak as Bruce Leroy in the cult classic “The Last Dragon”. This is the movie that brought us the first Black Action Hero in movie history and Taimak joins for a special retrospective on the kooky urban film some credit for blazing the trail to “Black Panther” today.

Hulk Hogan, Randy “The Macho Man” Savage and Andre “The Giant” may be biggest household names of ‘80s wrestling but for legions of cult fans, the top stars were over in the female side of ring: The Gorgeous Ladies Of Wrestling (G.L.O.W.). Today, GLOW is also the name of a wildly popular, fictionalized Netflix series but in this panel you’ll hear the stories from some of the original legends, including Roxy Astor, Gremlina, and MTV, among others.

Great Scott! Yes, You Can Build a ‘Back to the Future II’ Hoverboard and This is How You Do It

The original hoverboard from “Back to the Future II” may be safely tucked away in the Chicago Sports Museum but fortunately for fans, there is a way for you to make your own hoverboard. Jerry Lopez has cracked the code on how to do just that and in this workshop, he’s going to unpack the secrets to creating and celebrating the most famous hoverboard of all time – just in time for the 30th anniversary of the film this year. This session is a part of a conference-wide tribute that NostalgiaCon is paying event-wide to the Back to the Future trilogy.

Everything You Always Wanted to Know about DeLoreans, the Most Famous Pop Culture Car in Movie History

Thanks to a beloved blockbuster movie franchise and legions of fanatical owners, DeLoreans have become engrained as one of the most iconic cars of all American pop culture. In this panel, we’ll explore the stories behind these glorious time machines, their creator John DeLorean, and how their passionate owners are ever-building on their movie star cars’ notoriety.  If you’re a DeLorean Geek, this one’s for you!

Schlimazel! Hasenpfeffer Incorporated! Join us for the ‘Laverne & Shirley’ Reunion

We could not get enough of Laverne (the late Penny Marshall) & Shirley (Cindy Williams). They were polar opposites but defined the meaning of true friendship in a sometimes unfair and zany world. Even though we sadly lost Marshall earlier this year, we’re hosting a “Laverne & Shirley Reunion” with the one and only Shirley Feeny (Cindy Williams) and Carmine “The Big Ragu” Ragusa (Eddie Mekka), and it’s gonna be a real treat as they dish on all the hijinks behind the two-time Golden Globe Awards and a Primetime Emmy Award winning sitcom. We’re gonna make your dreams come true!

About NostalgiaCon
With offices in downtown Miami, NostalgiaCon (www.NostalgiaCon80s.com) is a global fan conventions company wholly focused on celebrating the pop culture icons, influencers, music, newsmakers, entertainers, shows, films, sports, fads, toys, foods and more, that fans feel the most fond of. NostalgiaCon is the first platform ever created to fully scale and monetize the decades both in the United States and internationally through conventions, concerts, events, privately licensed entertainment, social media, and more. On September 28 and 29, the Anaheim Convention Center will host NostalgiaCon, where the 1980’s will be captured in its full glory, capitalizing on the powerful force of nostalgia via the people, trends and moments that define entire generations.