Azúcar! Celia Cruz, the Queen of Salsa, and Ivy Queen, the Queen of Reggaeton, will Unite for Epic Throwback Virtual Duet on Calle Ocho Live, October 4 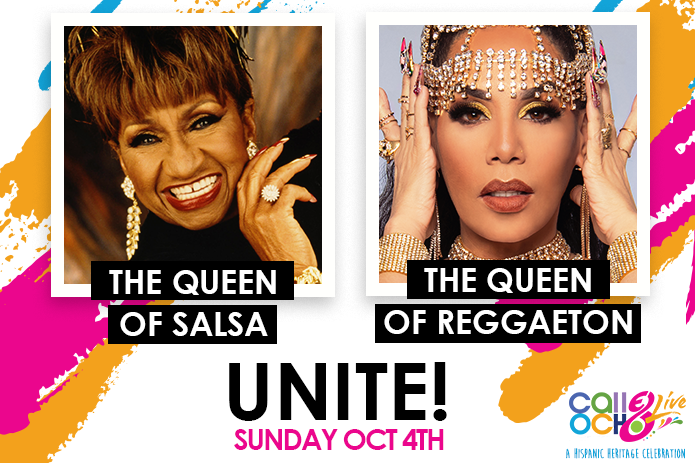 Replacing the Calle Ocho Music Festival that earlier this year was cancelled due to Covid-19, Calle Ocho Live is a national live stream and broadcast TV Hispanic Heritage Month-themed extravaganza that will feature major music artists, a variety show and many creative surprises.

The song Ivy Queen is recording will be kept under tight wraps until the online event and is expected to be one of the most anticipated moments of the entire show, which like the song is being co-produced by the Kiwanis of Little Havana, RetroPop Media and Atlantino. The virtual duet harkens back to 1992 when the then-living Natalie Cole sang “Unforgettable” with her late father Nat King Cole, catapulting the classic hit back into the Top 10.

“Celia Cruz stands out for her powerful voice, talent, stage presence, and eccentricities,” said Ivy Queen. “I’m honored to sing one of her songs with Celia because she captivated me from the moment I first heard her incredible voice and she is synonymous with the highest values, sacrifices and empowerment music that gives all of us. ¡Viva Celia Cruz, the Queen!”

“Celia’s biggest wish was that her name be kept alive for future generations and this special performance with an artist with the stature of Ivy Queen is something that will keep her glorious legacy going for decades to come,” stated Omer Pardillo Cid, President of the Celia Cruz Foundation.

In addition to featuring live and pre-recorded performances from top Latin music artists, celebrities and social media personalities, Calle Ocho Live will also highlight stories from the families that are served by the Kiwanis. Even though the online show is free, the event will feature a call to action for viewers to give a donation of $8 or more ahead of or during the festival to the Kiwanis at https://kiwanislittlehavanafoundation.org/donate-to-kiwanis- de-fundación-la-pequeña-habana/.. Supporters and large philanthropists are urged to pledge whatever amount they can.

Calle Ocho Live officially kicks off with a digital and national broadcast show that will feature more than a dozen media companies and their respective digital platforms on YouTube, Twitter, Periscope, Tik Tok, and Twitch. Announced broadcast partners so far include VIVALIVE TV, ORA TV, BronxNet, and Tarima. The interactive three-hour livestream experience will include music artists, entertainers, comedians, chefs, social media influencers, and other surprise personalities. Collectively, the show’s broadcast will surpass millions of verifiable video views and will generate many more millions in overall media impressions.

Audiences at home will also have several options to get involved live on the show throughout the day with opportunities to not only win prizes, but also be featured on the show in a variety of engaging ways.

Strategic partners of the show include Cerro Group, Dustelli Music, and The 360 Group.

The Facts Behind the Cause

The Kiwanis of Little Havana is an affiliate of Kiwanis International, a worldwide non-profit organization of volunteers dedicated to serving children in their communities. Founded in 1975, the Little Havana Chapter is known for using advanced fundraising initiatives, such as Carnaval Miami and its flagship event Calle Ocho Music Festival. Through the Kiwanis of Little Havana Foundation, the organization impacts thousands of underserved families annually, with youth development programs including holiday giving, college scholarships, back to school assistance, emergency financial assistance, and more.

Monies raised through Calle Ocho Live will be used by the Kiwanis of Little Havana Foundation to assist diverse families in South Florida with college scholarships, back to school assistance, holiday gifts, emergency financial assistance, and other support during the Covid-19 crisis.