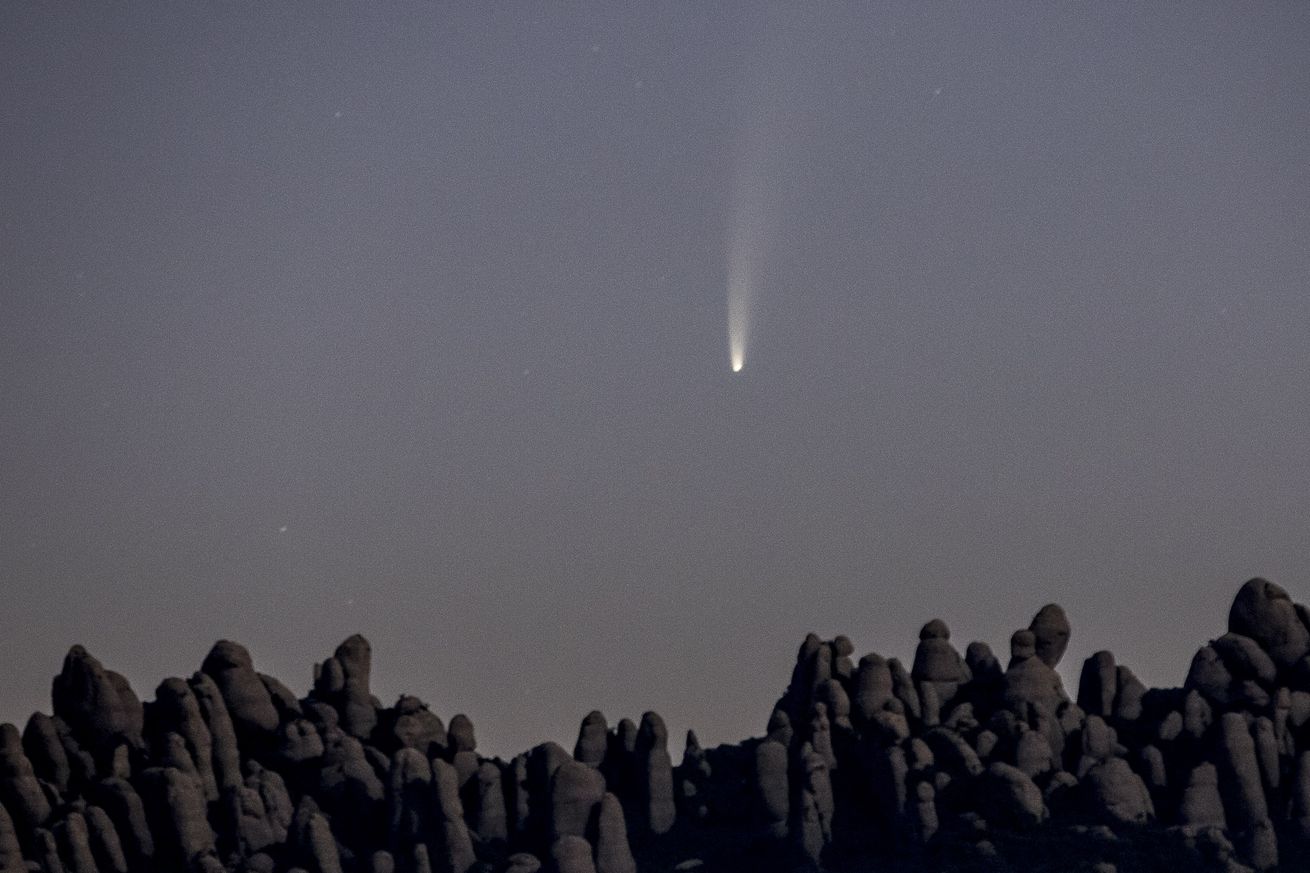 For any early birds who have ventured outside in the US this week, you may have seen a tiny — yet spectacular — sight in the pre-dawn sky. A comet with a bright, opulent tail has been gracing the skies in the wee morning hours before sunrise, and it’s been giving photographers quite the show for the last week.

The comet is known as Comet C/2020 F3 NEOWISE — or just NEOWISE for short. Scientists just discovered the rock on March 27th. It gets its name from the NASA mission that discovered it, also called NEOWISE, for Near-Earth Object Wide-field Infrared Survey Explorer. The mission consists of a spacecraft in orbit around Earth that’s tasked with cataloging as many asteroids near Earth as possible — especially any that might be potentially hazardous to our planet. But when the team behind the NEOWISE mission spotted this object, they knew they had found something special.

“In the discovery images, it immediately was obvious that something was up.”

“In the discovery images, it immediately was obvious that something was up,” Amy Mainzer, the principal investigator for NEOWISE at the University of Arizona, tells The Verge. “Instead of [appearing] as a point-like dot, it looked distinctly fuzzy. And that’s a good sign that this is a comet as opposed to an asteroid.”

The difference between an asteroid and a comet mainly comes down to ice. Asteroids are typically pretty rocky in nature. While they may have some ice trapped inside of them, they look more or less like big chunks of dry rock. Comets, on the other hand, are often a mixture of rock and all sorts of ices — including water, carbon dioxide, ammonia, and more. These ices are pretty well mixed throughout a comet, and it’s this material that gives comets their trademark fuzzy tails. The Sun heats up the ice, turning it into gas that envelopes the comet.

That’s what’s happening with NEOWISE right now. On July 3rd, NEOWISE came closer to the Sun than the orbit of Mercury, and that flyby caused much of the icy material to cook, erupting as gas and dust. NEOWISE is a pretty sizable comet, too, measuring about 3 miles (or 5 kilometers) across, which is why we can get this great view of it from Earth. “You take something that’s a really big hunk of ice and rock all mixed together, and you park it very close to the Sun, it’s gonna set off some fireworks,” says Mainzer. “Not enough to destroy it, we don’t think, but enough to really make the surface sizzle and throw off a lot of material.”

For much of last week, NEOWISE has been showing up just above the northeastern horizon, about an hour or so before sunrise in the Northern Hemisphere. People have been able to spot it best with binoculars, though some claim to be able to see it with the naked eye. And many astrophotographers have captured stunning images of the comet in all its gassy glory just before the Sun comes out, including the astronauts aboard the International Space Station.

Around July 11th, though, the comet will start to appear in the evening just after sunset. It’ll be in the northwestern sky, below the Big Dipper constellation (or Ursa Major). Mainzer expects the comet to be visible for at least another week, maybe even longer. But it all depends on how the comet behaves. “Comets are very funny, fickle creatures, and it really depends on what this comet decides to do or what it does in reaction to this close passage by the Sun,” says Mainzer. “If we’re really lucky, it’s going to stay nice and active, and it should stay very bright for us.”

But this won’t last forever. NEOWISE is cruising steadily away from the Sun, and eventually, it’ll disappear from view, never to be seen by our generation again. The bright tail will drop away as the comet gets farther away from our Solar System’s heat source. “The comet’s outer layers will start to settle down again, and it will go back into the cold dark space that it came from,” says Mainzer.

“Even though this moment in time is difficult, it connects us to the bigger universe.”

Since this is such a fleeting moment, Mainzer really encourages everyone to try to catch a glimpse of this tiny piece of our Solar System, especially given what comets represent. These space rocks have been around since the Solar System first formed 4.6 billion years ago, so they carry with them the ancient history of our cosmic neighborhood. And experiencing a little awe about the origins of our cosmic neighborhood may be a nice respite from the hardship that the world is facing right now with the COVID-19 pandemic.

“Comets are a way for us to get in touch with that history and understand where we came from a little bit,” says Mainzer. “And even though this moment in time is difficult, it connects us to the bigger universe.”