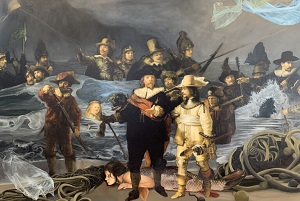 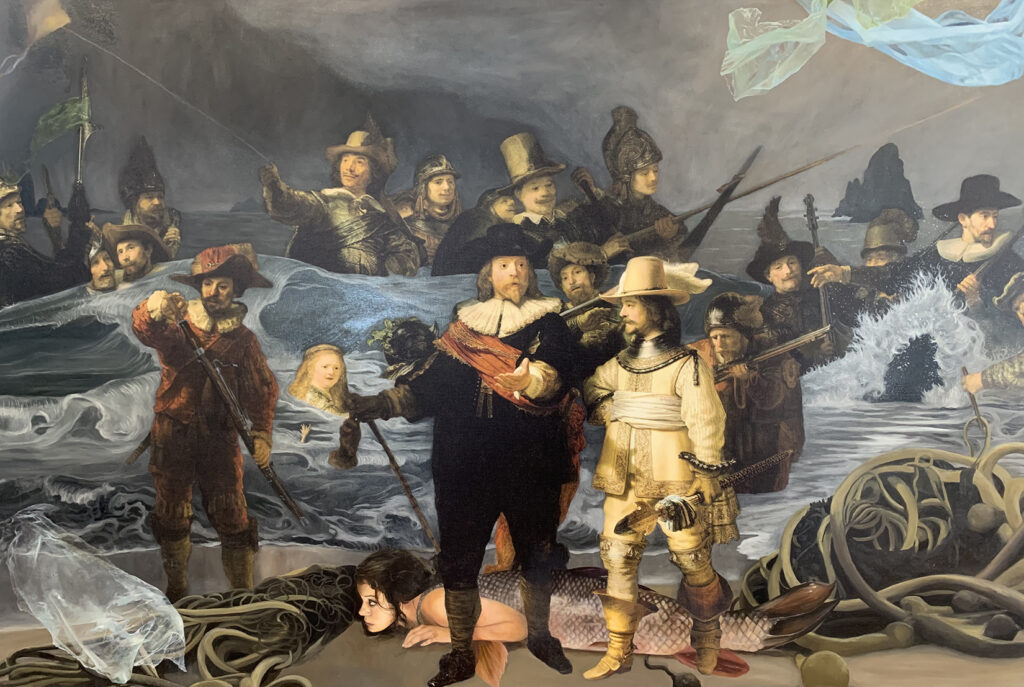 Starting September 25th, Marta Thoma Hall and Jeni Lila will be welcoming visitors to the Stone Boatyard Art Studio in Alameda, CA. For the past three years, Thoma Hall and Lila have been painting partners, exploring their mutual interests in art history, social issues and pop culture. Their ongoing exploration makes use of ‘ready-mades,’ in the tradition of Surrealist Marcel Duchamp—in this case, by repurposing high-quality reproductions of paintings by famous masters, transforming familiar images both visually and conceptually.

One of Watchery’s first works began with a canvas print depicting Rembrandt’s Night Watch. As Lila started painting on the print, she found herself “flooding the canvas, imagining a rising tide.” In the finished image, roiling waves nearly consume some of the watchmen while others stand waist deep, their obliviousness a comment on widespread lack of concern about global warming and catastrophic flooding. A mermaid lies in the foreground, eyeing a plastic bag washed up on the sand nearby.

Throughout the series this painting initiated, called ‘Rising Tides’, Thoma Hall and Lila have created images in which water transforms a variety of traditional historical pictures:l portraits, a naval ceremony, or even a battle scene. They often include elements that refer to ocean pollution, or reflect on the role of the nude in Western art by reimagining male subjects undressed rather than female ones.

As Thoma Hall has put it, “Creating this art with Jeni is an exciting process that is intuitive, thematic, and compositionally driven.” Their alterations include such things as ghostly figures made of garbage standing at attention as a triumphant George Washington approaches on a horse; Napoleon Bonaparte, seated in thought while clinging to party balloons, or founding fathers with (glass) jelly beans for spectacles.  Artists, entertainers, and political figures who have found their way into Watchery’s paintings include Picasso, JFK, RBG, Prince, and Queen Elizabeth.

Often, alterations are so skillfully rendered that it is difficult to differentiate additions from the original scene into which they have been incorporated. In other works, however, the artists combine a lively variety of approaches and styles, including both their signature realism and bold expressionist brushstrokes, or even the everyday objects of Pop– responding each time to the work’s subject matter, original intent, history, and context. In some paintings, thick paint in the form of flowers, abstract shapes, or birds creates a bold contrast to the flatness of the printed reproduction, celebrating the materiality of paint itself. Swaths of golden brown and a lighter warm tan hue were created by incorporating soil found in California and Hawaii, while multimedia additions include embroidery, glass beads, yarn, cut canvas, and 3D printed shapes.

All of the works in “Watchery” can be viewed at the artists’ Stone Boatyard studio by appointment contacting info@watchery.com