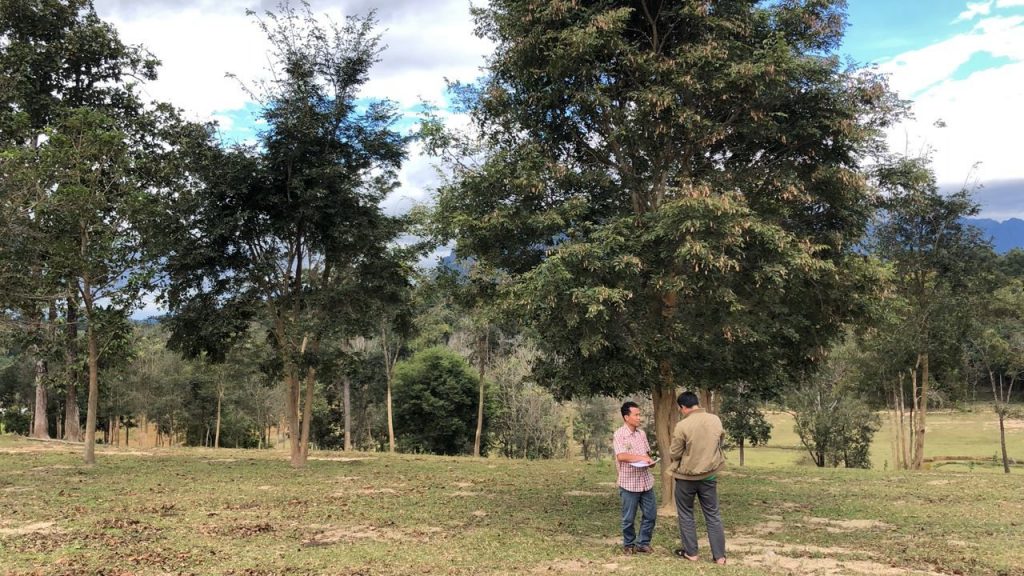 CANBERRA, Australia , Nov 30 2021 (IPS) – The famed Rosewood forests of the Greater Mekong region in Southeast Asia produce dark, richly grained timbers zealously sought after worldwide by manufacturers of luxury furniture, flooring and musical instruments, among other products. But their high value has also made them a major commodity in transnational organized crime.

Now a strategic partnership of international and national government research organizations is leading an expert endeavour to ensure their survival.

“The Rosewood species are among the most valuable species in the world. They are worth tens of thousands of dollars per cubic metre, but because of illegal logging, they were almost wiped out in the Indochina landscapes,” Riina Jalonen, a scientist working with the Alliance of Bioversity International and the International Center for Tropical Agriculture (CIAT), based in Kuala Lumpur, Malaysia, told IPS. The collaborative research-for-development initiative pursues research and innovative solutions to the major global challenges of land degradation, biodiversity loss and poverty around the world.

For the past three years, the Alliance has joined with national partners in Cambodia, Lao PDR and Vietnam as well as the University of Copenhagen and the Chinese Academy of Forestry to spearhead ways of conserving the genetic diversity of Rosewoods. The project, which is also working to support planting and restoration of Rosewood timbers and galvanize a strong reliable supply of seeds and seedlings, is led by the University of Oxford and funded by the Darwin Initiative in the United Kingdom. 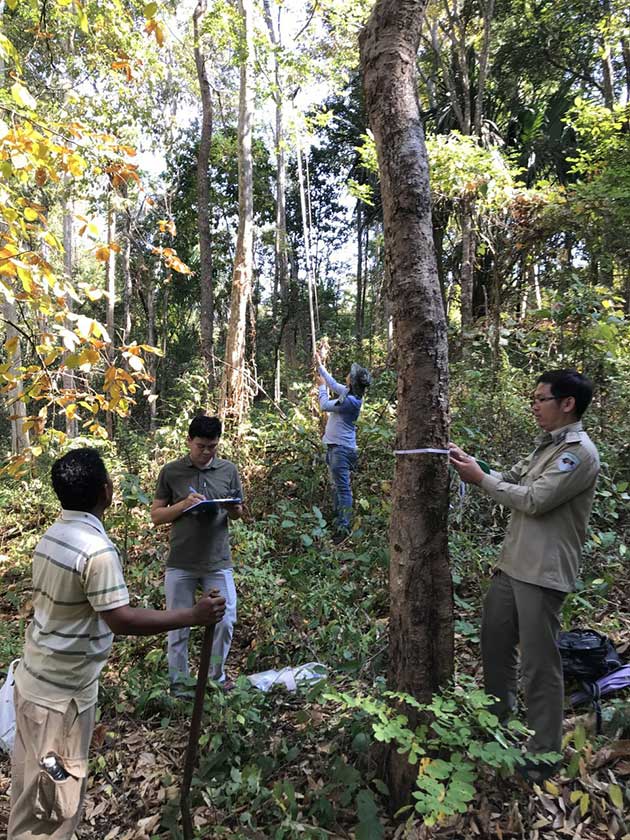 Chaloun Bountihiphonh at the National Agriculture and Forestry Research Institute in Vientiane, Lao PDR, has witnessed a turnaround in the fortune of the species since the project began in 2018. “The status of the Rosewood Dalbergia populations have improved and now cover more than 60 percent of their natural habitat, and a seed network has been established. And communities of the project have been strengthened in their awareness of the importance of Rosewoods and the additional income that they can get from seed collection,” Bountihiphonh told IPS.

The Greater Mekong subregion, comprising the countries of Cambodia, Lao PDR, Thailand, Myanmar, Vietnam and China, boasts immense biodiversity, including 20,000 plant species and 1,200 species of birds. The region’s forests provide the natural habitats for wildlife, but also prevent soil erosion and landslides, create essential levels of atmospheric moisture and combat climate change by reducing greenhouse gases in the atmosphere. And local communities, including many indigenous peoples, depend on the forests for shelter, sustenance, livelihoods and income.

But deforestation, driven by rapid population growth, expansion of infrastructure, agriculture and mining, as well as forest fires and illicit logging operations, has taken a heavy toll. Forest cover in the Greater Mekong declined by 5 percent, while in Cambodia alone it declined by 27 percent, from 1990-2015, reports the United Nations Food and Agriculture Organization (FAO).

The Rosewood conservation project has focussed on three specific species: Dalbergia cochinchinensis, also known as Siamese Rosewood, is in high demand by furniture makers. Dalbergia oliveri, or Burmese Rosewood with highly fragrant and with a pronounced grain, is popular for woodworking, and Dalbergia cultrata, also named Burma Blackwood, is a blackwood timber characterised by varied hues of burgundy.

The United Nations Office for Drugs and Crime (UNODC) reports that 8.3 million kilograms of illegally trafficked Rosewood was seized worldwide between 2005-2015. The top ten source countries included India, Thailand and Cambodia, and the main destination countries included China, Malaysia, Vietnam and the United States. This is also what makes regional collaboration so crucial for safeguarding the species.

The conservation project grew out of discussions with forestry experts in the Mekong countries, who highlighted the issues threatening the valuable timber forests. The Alliance first conducted conservation assessments of the species to analyse and identify the specific threats and conservation needs.

Then, in partnership with Cambodia’s Institute of Forest and Wildlife Research and Development, Lao’s National Agriculture and Forestry Research Institute and the Vietnam Academy of Agricultural Sciences, two main conservation approaches were implemented. The ‘in situ’ approach preserves the Rosewood trees in their natural environment, for example, in the form of a national park or community-managed forest. The second ‘ex situ’ strategy promulgates the species in a different designated location, such as a plantation or in a seed production area.

However, restoring and expanding forests requires a vast supply of seeds. And so, seed and seedling production are some of the most important activities carried out in forest-dwelling communities.

“We have been helping farmers to establish seed orchards, where trees are planted specifically for seed production. It is the farmers who are interested in producing seeds and selling them. Especially in Cambodia, they have quite an active network of seed producers and seed collectors, and the Institute of Forest and Wildlife Research and Development has really spearheaded this work to help more and more farmers to participate and benefit” Jalonen said.

Seed orchards make seed collection an easier, safer and less time-consuming process than in the natural environment, and have led to substantial economic benefits for communities. 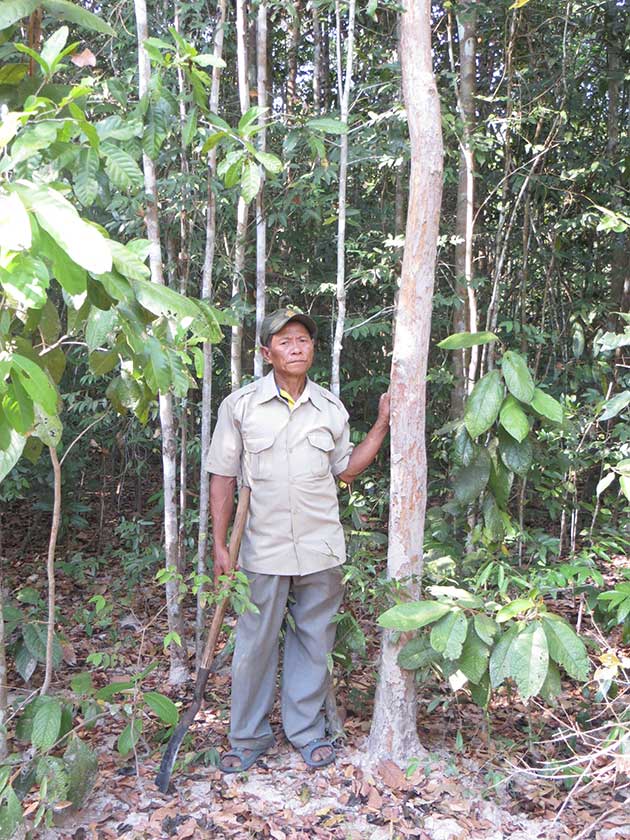 “People in rural areas are increasingly realizing the value of these species. The species provides two sellable products; timber and seed. Timber takes a very long time to produce, but seed is something that the farmers can collect after a few years and Rosewood seed is highly valuable, fetching around US$200-250 per kilogram. It is something that the farmers can harvest every year for annual income,” Jalonen explained.

The work being done by the Alliance and its national partners aims to benefit seven rural forest-based communities in the Greater Mekong region and reduce poverty in 175 households by boosting earnings from the marketing of seeds and seedlings by up to 20 percent.

“Big Rosewood trees are not widely available as before because of the illegal cutting and debarking of the Burmese Rosewood,” Ou Veng, farmer and village leader of O Srao in Cambodia, said. “In the past, people were not interested to protect the forest. But now they worry about losing it because it’s required for their livelihoods. So more and more people are involved in patrolling, tree planting and fire protection. The forest has regenerated significantly.”

In Pursat, Cambodia, the expansion of a local farmer’s nursery for the sale of Rosewood seed and seedlings increased local employment opportunities in the community threefold between 2018 and 2020.

In the village of Kampeng, also in Cambodia, Soeung Sitha, a farmer described how reafforestation efforts had also acquired a heritage purpose. “Many of our community forest members have planted Siamese Rosewood in their home gardens and farms. They don’t want the species to become extinct. They want the younger generation to use them as well,” he said.

Ahead of the initiative coming to an end in December, Jalonen reflected on what is likely to be some of its important legacies.

“A model for farmer-led seed production for Rosewoods now exists. What has been really successful is the establishment of seed orchards by farmers,” she said. “Seeds are providing incomes and job opportunities and, what is also important, is that it generates more opportunities for women because collecting the seeds of these trees from the forest is difficult. You actually have to climb the trees. So when the seed production is done on farms with smaller plants, it is much easier to collect.”

And the new forest growth will be more robust. “By helping to improve the quality of seeds and seedlings in restoration areas and making sure they are genetically diverse, the planted forest will grow to be productive and also resilient. Under the rapidly changing environment, this capacity of the trees to adapt is more important than ever – and not only for the species themselves but also for the global efforts to mitigate climate change through forest conservation and restoration,” Jalonen emphasised.