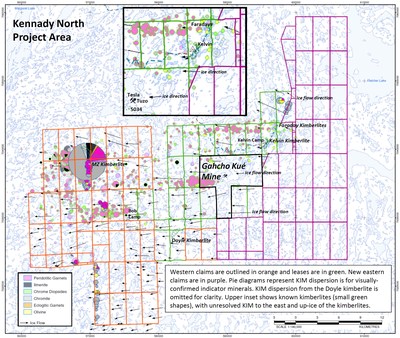 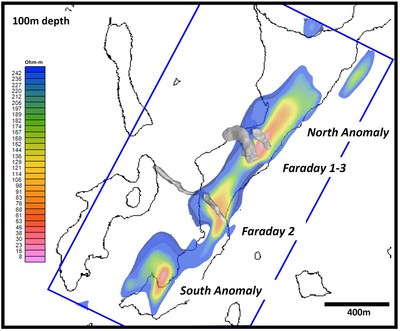 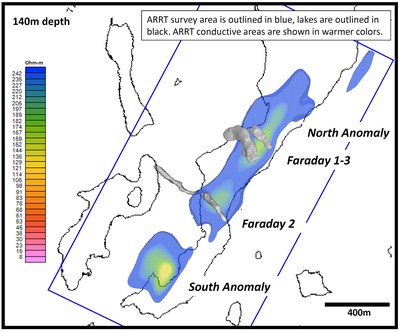 The Company has also completed a detailed glacial geology study on the eastern claims that is similar to the study conducted in 2018 by Palmer™ (Vancouver, BC) on the western claims and leases. The 2021 Palmer study incorporates field mapping and remote imagery data to identify glacial materials that are most amenable for recovery of KIM, and for tracking those KIM back to a primary source. Summer 2021 till sampling on the eastern claims is nearly complete with 327 samples being collected under guidance from the 2021 Palmer study. An additional 298 till samples were also collected from the western Kennady claims.

The Company gratefully acknowledges the receipt of a Minerals Incentive Program (MIP) award from the Government of Northwest Territories. The MIP award will help to offset costs of the first-year exploration activities on the eastern claims.

The ARRT survey was conducted during the winter 2021 program with snow-machine support. Line spacing was 40m, 80m and 160m depending on proximity to known kimberlites. Line traverse repeats were conducted in opposite directions over roughly the same lines to better resolve the 3D model. Roughly 650 line-km of ARRT data were collected over three days during the winter 2021 program.

Two plan-view slices of the ARRT results at 100m and 140m depth are shown in the images below. To the northeast of Faraday 1-3 and the southwest of Faraday 2 are two ARRT anomalies with expressions that are similar to those associated with the nearby Faraday bodies. These untested target areas are called the North and the South Anomalies.

Limited exploration drilling near the South Anomaly in 2018 (drillholes KDI-18-14a,b; KDI-18-15) intersected kimberlite from 0.11m to 5.41m in length as well as broken country rock (see News Release, May 23, 2018). None of these three historic drillholes were oriented in such a way as to properly test the South Anomaly. No historic drilling has been conducted near the North Anomaly. Drill-testing of both of these anomalies is a priority for the winter 2022 exploration season.

In addition to the 2021 Palmer study and the ARRT survey, there is a significant amount of historical geophysical coverage over the Kennady North Project. This includes 3,960 line-km of airborne gravity, over 30,000 ground gravity stations, 610 line-km of ground magnetics, and over 3,000 line-km of OhmMapper resistivity data, as well as bathymetry, HLEM, GPR, and ELF surveys over specific target areas. Numerous anomalies generated from these surveys require further ground-truthing and eventual drill-testing. Details of these surveys and their associated anomalies can be found in technical reports filed with SEDAR in 2017 and 2020, which are also available on the Company website.

The remainder of the summer 2021 exploration program will focus on completing the till sampling program with the samples to be shipped to SRC (Saskatoon, SK) for recovery of KIM. The processing results from SRC should be received in early 2022, before the start of the winter exploration season.

For further information on Mountain Province Diamonds and to recive news releases by email, visit the Company’s website at www.mountainprovince.com.