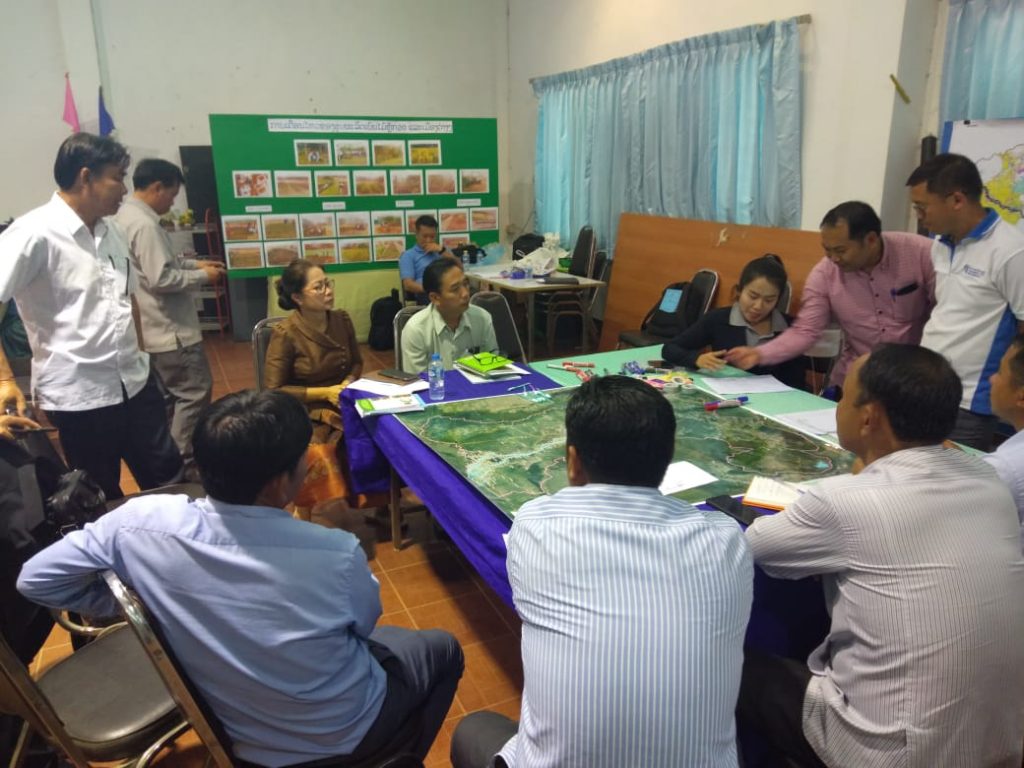 KATHMANDU, Nepal, Sep 14 2021 (IPS) – As incidents of drought and extreme rainfall increase, farmers in Southeast Asia are partnering with experts to develop targeted weather forecasts to work around the threats and, when adaptation becomes too costly, buy specially designed insurance to protect their livelihoods.

Climate impacts are increasing. In 2016, for example, the impact of what is known as the El Niño Southern Oscillation (ENSO) resulted in severe drought and saline intrusion in 11 out of 13 provinces in the Mekong River Delta. This affected 400,000 hectares of cropland, resulting in 200 million dollars in economic losses and food insecurity among farmers. Household incomes dropped 75 percent, pushing vulnerable farmers who had little savings and no insurance deeper into poverty.

A key component of the project, DeRisk Southeast Asia, is to develop a number of adaptation strategies, says Professor Shahbaz Mushtaq, the project’s insurance segment lead at the University of Southern Queensland (USQ) one of three project partners. The others are the World Meteorological Organisation and the Alliance of Bioversity International and CIAT, part of the CGIAR.

“So the project is working on improved climate forecasts, new irrigation systems and practices, and improving production systems,” says Mushtaq in an online interview. “The underlying premise is that the smallholder growers need to mitigate their risk as much as they can while developing and adopting suitable adaptation practices.”

“Then, the project also acknowledges that there’s a limit to adaptation,” he adds. “Not all risk is manageable. [It is] when it is no longer economically viable then you need to transfer the risk elsewhere, this is where insurance will play a major role”. 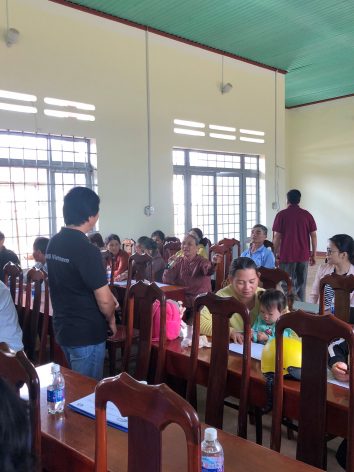 DeRisk, funded by the German Federal Ministry for the Environment, Nature Conservation and Nuclear Safety, operates in Vietnam, Laos, Myanmar, and Cambodia. For example, in a pilot led by the Alliance in one of the provinces in the Mekong River delta, the department of crop production (across levels), extension officers and farmers now sit down with weather forecasters (or meet virtually because of COVID-19 restrictions) to mould a general weather forecast into seasonal and 10-day advisories that target rice producers.

“We really emphasize co-development by multiple stakeholders, integrating information from the hydro-meteorological (‘hydro-met’) experts and the crop experts with the local knowledge of farmers,” says Nguyen Duy Nhiem, DeRISK Country Coordinator in Vietnam.

For example, the representatives will take a seasonal forecast, broken down by month, and generate guidance for specific crops such as: “the best planting date, the best variety to plant and if drought happens, what drought-resistant variety to use,” Nguyen tells IPS in an online interview.

That advice is packaged as a bulletin and delivered using a variety of media, including stationary loudspeakers in villages, paper bulletins or posters and on a smartphone app called Zalo.

The 10-day advisories zero in on daily conditions. “For example, if it’s going to rain on a certain day, farmers are told not to apply fertilizers or pesticides because they would leach into the soil,” explains Nguyen.

He’s happy with the project’s progress. The stakeholders from the hydro-met sector and agriculture sector “understand better each other’s languages,” says Nguyen. “For example, prior to project’s engagement when talking about ‘rainy days’, the agriculture stakeholders and farmers think that rain should be an amount that can be measured in a gauge while for the hydro-met sector that can be any amount above 0.0 mm. The definition of rainy days has been explained during discussions and clearly noted in bulletins.”

In addition, Nguyen says the 20,000-plus farmers who have received the advisories in the past two cropping seasons have been very pleased because the information helped them avoid the impact of damaging weather and make more informed decisions better. If plans hold, other districts and provinces in the region will start developing the tailored forecasts in 2022.

Challenges, according to Nguyen, include the lack of capacity of staff in provincial weather offices to develop the tailored forecasts. Another is reaching more farmers. Although many farmers have access to smartphones, not all of them know how to use them to access the advisories in the Zalo group. Possible solutions, he says, include developing an app or partnering with a telecom company to send messages to all customers in project areas.

In neighbouring Laos, agro-climactic advisories are available for the whole country, in monthly and weekly forecasts, says DeRisk Country Coordinator Leo Kris Palao. The implementation of DeRISK in Laos was linked with existing efforts by the Food and Agriculture Organization (FAO) to further improve this system with national partners. 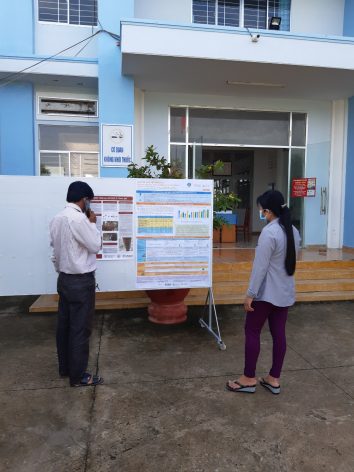 The system is automated, he explains in an email interview. Called the Laos Climate Services for Agriculture (LaCSA), the system analyses meteorological and agricultural data from national databases and field-level data collection by local partners. Offices of the Ministry of Agriculture and Forestry review advisories before being disseminated.

LaCSA can be accessed online through an app (Android/iOS), but for those who don’t use IT tools, the information, as in Vietnam, is also shared via loudspeakers, radio and TV, and community and school posters.

More than 21 000 farmers in Laos have adapted their activities after receiving an advisory. “We are happy with the progress made by the De-RISK project in Laos,” says Palao. “Based on our baseline assessment, most of the responses from farmers receiving the agro-climatic advisories indicated that change in planting dates, use of suitable varieties tailored to the climate condition of the season, and water and fertilizer management were among their adaptation practices.”

Mushtaq says that to further mitigate the ‘residual risk’, which can’t be managed economically through adaptation strategies, his team developed various indexed-based insurance products that are now being tested through a pilot insurance scheme – Coffee Climate Protection Insurance.

“We went to the field and interviewed several hundreds of smallholder coffee growers and industry.” The assessment for the insurance scheme included asking about the biggest risks faced by farmers, whether it be drought, disease, or extreme rainfall, among other hazards. “We wanted to develop products for those risks that are most impactful,” Mushtaq says.

Mushtaq says he was impressed when coffee growers told him that drought and extreme rainfall are major risks but didn’t want drought insurance because they are able to cope through access to irrigation. “But if there’s extreme rainfall, we don’t have an option to manage that risk, so we want products to cater to it,” the farmers said.

The initial assessment found that farmers have a range of attitudes about insurance — some were willing to pay more than the suggested premium, others would not even consider purchasing, and the majority were in the middle, unsure.

Finally, most agreed on the product. What swayed the doubters was the credibility that USQ and its partners had developed over the years working with the coffee industry represented by the private sector and associations, says Mushtaq. “To me, the most important success factor was the presence of the industry itself. You need to have really solid leadership to drive this agenda. And we were very lucky that we got some really good partners in the coffee industry.”

In stages 1 and 2 of the pilot, farmers and coffee traders will split the costs of the premiums, but in later years, other actors in the supply chain, such as roasters, will have to contribute a portion; the exact division of costs still needs to be negotiated.

Currently, the ‘extreme rainfall’ insurance product is in operation, explains Mushtaq, meaning that if total rainfall exceeds the threshold for the two-month season, payments would be triggered. As the insurance is indexed, the payouts would reflect the amount of protection that farmers chose to purchase.

To get to this point, “we had to run several workshops, and gather a lot of information on how index-based insurance products works,” he says, adding that more needs to be done to increase awareness. Moving forward, the team considers running a campaign to address this, “Awareness is still a problem, and we do need to run a massive campaign.”

DeRISK aims to develop its climate services and insurance products further and work with national partners on policies and strategies supporting smallholder farmers in the region in response to climate risks.