As the world turns its sights to Paris for the next Olympic Games, North America is in the running to host a history-making international event of its own in 2024. For the first time, two cities on either side of the US-Mexico border have teamed up to host a global gathering some call the “Olympics of Design and Innovation.” 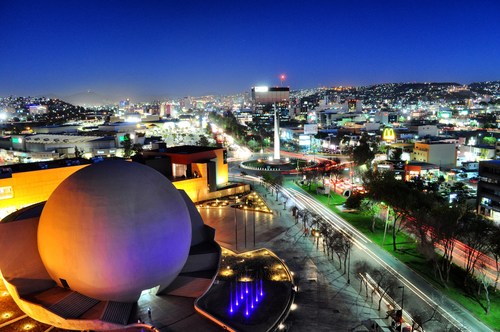 A nighttime view of Tijuana from above the Tijuana Cultural Center (CECUT) in the Zona Río district of Tijuana, Mexico. Together with San Diego, California, the two cities have partnered in an innovative cross-border bid for the 2024 World Design Capital designation.

Separated by an international border but bonded through culture and history, San Diego and Tijuana have taken the unprecedented step of partnering to pursue designation as the 2024 World Design Capital. Collaboration and cross-border innovation is nothing new to what is referred to as the Cali-Baja megaregion. Coming on the heels of the pandemic, socio-political shifts, and continued regional growth, the World Design Capital 2024 bid is a unifying platform that can elevate the region to a global stage.

“Nothing exemplifies international connectivity like a transformative initiative that literally crosses borders, spans two countries, and helps the world (re)design the future” said Michele Morris, president of the Design Forward Alliance, the entity spearheading the bid. “This is about showing the world that we are more than just a border or two border cities. We are one regional home to 7 million people who are more alike than they are different and who partner in many incredible and groundbreaking ways. It is also about shedding global light on the pioneering design and innovation powerhouse we are together.”

If successful, the busiest border crossing in the Western Hemisphere would reveal itself as home to world-class designers, scientists, artists, architects, musicians, engineers, educators, and leaders helping to build the interconnected and resilient communities needed in the 21st century. The designation will also highlight the role design and human-centered work plays in addressing complex challenges like social equity and justice, climate action, affordable housing/homelessness, mobility, and more.

“The design and innovation that spans our international border is unparalleled,” said Laura Araujo, Director of Binational Affairs for Tijuana Innovadora and Co-Chair of the initiative’s Site Visit Experience Committee. “We are a binational megaregion that is far from just a tourist destination, but rather an epicenter of life-changing science, innovation, and design that is changing the world. We are excited to share that story.”

The World Design Organization (WDO), an international group representing thousands of designers around the world, announced in July that the San Diego-Tijuana binational region had advanced to the final selection round, up against Moscow for the coveted designation. Following a site visit by the selection committee in early October, the WDO will announce its final choice later in the month.

San Diego would be the first U.S. city ever to receive the World Design Capital designation. Tijuana would be its country’s second city to hold the title, following Mexico City in 2018. The bid is being led by the Design Forward Alliance, with the full support of both local governments, including the mayors of San Diego and Tijuana. The cross-border collaborative of civic, academic, community, and government partners has brought together organizations such as the University of California San Diego’s Design Lab, the Burnham Center for Community Enhancement (BCCA), the Smart Border Coalition, Tijuana Innovadora, the American Institute of Architects, The Wrethinking Foundation, CETYS Universidad, and private companies such as San Diego-based biotech powerhouse Illumina – once named “the world’s smartest company.”

“Innovation and design are the lifeblood of the San Diego-Tijuana region. As the theme of our proposal says, changing the world begins at home,” said Tad Parzen, President and CEO of the BCCA. “Our region has a unique story to tell, and it’s through a history of collaboration and civic engagement focused on putting our communities before ourselves, that we have achieved so much. It’s this culture that has fostered many important discoveries and continues to attract interest and investment in our region.”

Every two years, the WDO recognizes cities for their effective use of design to drive economic, social, cultural, and environmental development. The rotating World Design Capital showcases best practices in sustainable design-led urban policy and innovation that improve quality of life.