Miami, Florida. August 20, 2021. The United States Minority Chamber of Commerce (U.S. MCC) is pleased to announce it is joining forces with U.S private and public sector organizations to provide immediately support to Haiti with a large humanitarian assistance to families and individuals devastated by a magnitude 7.2 earthquake last August 14, 2021, causing widespread destruction in the Caribbean country. According to the U.S. Embassy in Port Prince, death toll has risen to at least 2,000 people as search and rescue teams are racing to find survivors in collapsed buildings and rubble. At least 10,000 are injured and many more are still missing in a report of the Red Cross based in Port Au Prince.

The United States Minority Chamber of Commerce has worked to organize a committee dedicate to provide humanitarian assistance and rebuild economy through different entrepreneurs programs for small and micro business in Haiti . The economy of the county need to move forward.

Beginning this September 5th a strong delegation led by Chairman of the Committee of Haiti-USA relations, Mr. Pierre Medina,  will be traveling to the country to provide life-saving food supplies and hygiene kits to 20,000 people and stand ready to help another 20,000 in the affected regions. “We’re coordinating with partners, governments and churches in Port au Prince to help families along with children in orphanages that lack access to water, food, and electricity. We’ve also received word that community members in our delegation will be secure” said Mr. Medina, Chairman of the U.S.MCC Haiti-USA relations.

The Chamber is working with national partners to ensure that children who have been suffering during the earthquake  in Haiti, said Mr. Doug Mayorga, President of the Chamber, “ Haiti  is in  extremely bad situation, we need to heal those sad memories with the generosity of the United States of America. From Honduras to Colombia, to Haiti and Puerto Rico, The Chamber has helped rebuild communities post-quake or hurricanes after 20 years  for helps and access adequate support, safe water, sanitation and hygiene products and stay safe from harm”.

Some of the issues Haiti faced prior to the earthquake persist today, including weak political governance, lack of infrastructure, and limited access to basic resources. Haiti ranks among the world’s least developed countries because of political, social, and environmental insecurity.

About the United States Minority  Chamber of Commerce Foundation: Inc a private, non-partisan, no overhead fund, was purposefully created to help low income communities to reduce poverty through the U.S. entrepreneurship spirit and assist countries in the emergency and preparedness. Committed to investing 100% of donations amongst the most critically affected communities, the humanitarian goals focus on food/agriculture, clean water and fuel/renewable energy initiatives. All minority companies – large and small, from a wide range of industries and locations will participate in the Chamber’s humanitarian effort will  receive assistance from the Minority Chamber to receive a tax exempt minute to deduct from its 1120 tax declaration. For more information: www.minoritychamber.net 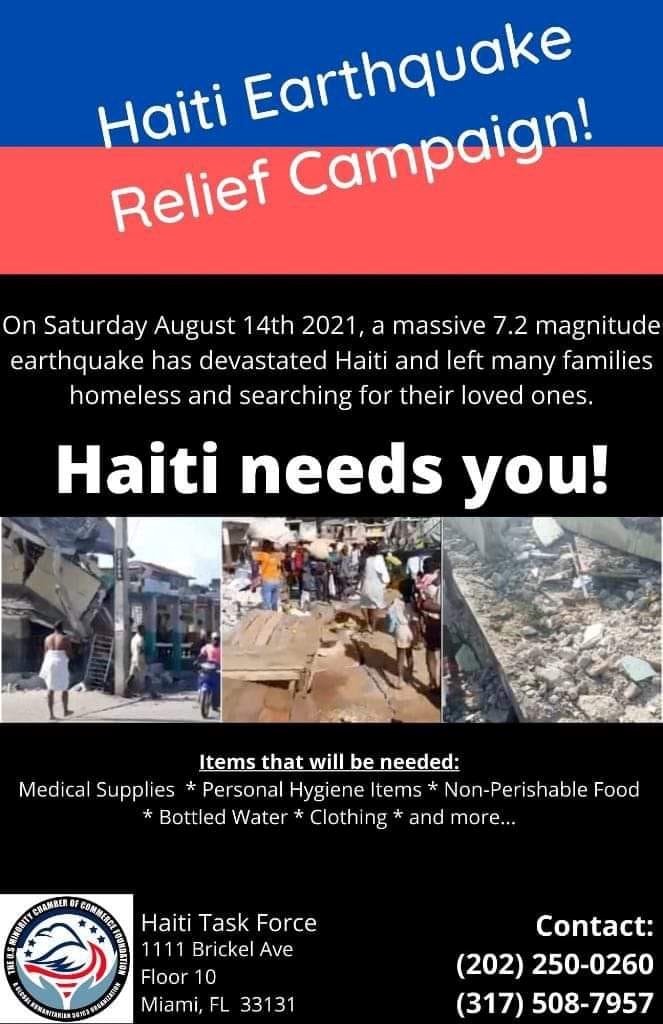