Agroecology as the Centrepiece of Sustainable Food Systems

The world is facing rising hunger and food insecurity, biodiversity loss and the impacts of a changing climate. Experts are increasingly looking to agroecology for sustainable food production. 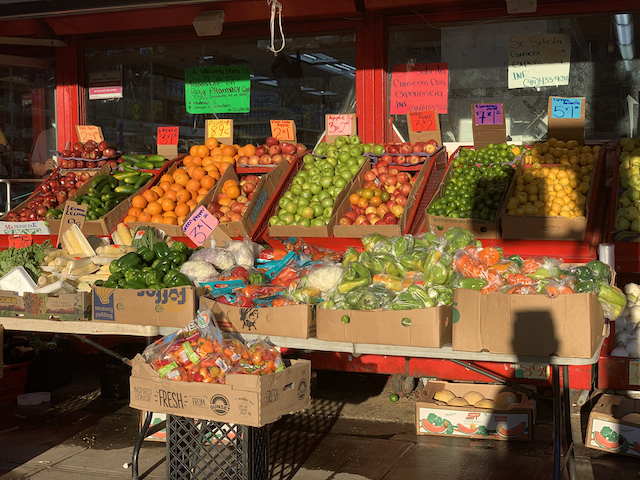 The most important goal of a food system or of agricultural production is to increase food production for our increasing population, but nutrition is essential. Produce stall in Harlem, New York. Credit: Alison Kentish/IPS

UNITED NATIONS, Jul 6 2021 (IPS) – In three weeks, the United Nations will bring together farmers, scientists, policymakers and civil society for the last major event ahead of the September UN Food Systems Summit.

Billed as ‘the people’s summit,’ the Jul. 26 to 28 event will be hosted by the Government of Italy and adopt a hybrid model, with some delegates on-site in Rome and others online.

Its organisers say scientists will present the latest research in transforming global food systems, while policymakers are expected to discuss financing and action to tackle issues like land degradation, conflict and climate change, which are worsening global hunger and food insecurity.

Earlier this year, the Global Network Against Food Crises reported that acute hunger had risen to a five-year high. With the COVID-19 pandemic, conflict, biodiversity loss and half of the earth’s land classified as degraded, the grouping warned that finance and urgent action were needed to reverse the rising trend of food insecurity.

General Coordinator of the Alliance for Food Sovereignty in Africa (AFSA) Million Belay believes that agroecology has a special role to play in hunger eradication.

Belay, a member of the International Panel of Experts on Sustainable Food Systems (IPES-Food) and the Barilla Foundation, researches the transformation of food systems in Ethiopia.

While AFSA will not participate in the UN Food Systems Summit, Africa’s largest civil society group has been organising its own events, based on sustainability, indigenous knowledge and science.

Belay spoke to IPS about the importance of agroecology and how systems such as the Barilla Foundation’s Food Pyramid can help to target hunger at its root.

Inter Press Service (IPS): Could we start with a brief introduction to the Alliance for Food Sovereignty in Africa?

Million Belay (MB): The Alliance for Food Sovereignty in Africa is a movement. It is broad-based – we have farmers, fisherfolk, pastoralists, indigenous peoples, women and youth networks, civil society networks, consumer networks and faith-based institutions.

Out of the 55 African countries, our members work in at least 50 of them and we work with two hands. On one hand, we fight the corporatisation of Africa. We fight for our lands, our seeds, our water and our lives. On the other hand, we propose a solution. Our solution is agroecology.

IPS: In the face of climate change, rising food insecurity and hunger, there has been a push to agroecology. How important is agroecology to tackling some of these critical issues of our time?

MB: Agroecology is a response to many issues on many fronts.

The most important goal of a food system or of agricultural production is to increase food production for our increasing population, but nutrition is essential. We must eat healthy food and this is an area which is very much impacted by climate change.

Also, when we produce food, the food system should not impact the biosphere, which includes our climate, our diversity, our water and our land. Food production should also be respectful of our culture. We have rich culture, which is the result of thousands of years of practices and traditions by our communities.

These are some of the important factors in the food system process.

The question is, therefore, what kind of system ensures this? Currently, unfortunately, the system is productivity-based, it is based on chemicals, on ownership of seeds and ownership of our land. Agroecology comes with a totally different paradigm. It ticks all the right boxes. It is basically based on the knowledge of people and the practices of the people, but it has a cutting-edge science to it as well.

Agroecology is also a social movement. That is why we are using it because at the center of agroecology is the right to food and human rights questions are intimately related to climate change, for example.  Climate impacts our food. Climate impacts our water, our land and our lives. So many things are happening because of the problem that we didn’t create.

I think what climate change brings us as well is unpredictability into the future. What kind of agriculture is important for an unpredictable environment? You have no idea what is going to come tomorrow. Agroecology helps to answer these types of concerns.

IPS: The international community is preparing for the UN Food Systems Summit (UNFSS). As a food systems researcher, what are your hopes for the summit?

MB: We (AFSA) have already decided to organise a meeting outside of that food summit.

We do not agree with the process of the summit; how is it being handled or controlled or how the agenda is organised. We are not happy and the Alliance for Food Sovereignty in Africa has written a letter to the Special Envoy for the Food Systems Summit Dr. Agnes Kalibata with a range of demands and they have not been fulfilled.

We however have started our own food policy development process which involves a country-level dialogue in 24 of the countries. They are food systems dialogues that we started even before the UNFSS.

Also, at the African Union level, we are trying to develop a food policy framework for Africa which is based on sustainability.

IPS:  What is your role on the Barilla Foundation’s advisory board and how is the Foundation contributing to food system transformation?

MB: The majority of the board members are from Italy, but the issues that they raise have global impact. In addition to the scientific studies, they organise yearly global gatherings where critical issues about the global food system are discussed.

The outcomes of those global talks are very important to any part of the continent. My role primarily is to bring the African perspective, an African view, in my writings and discussions.

What is important to note is that it is not only the African perspective, but also the input of civil society which is not reflected in so many other spaces.

IPS: The Barilla Foundation continues to invest time and resources into the development of sustainable food systems. What are some of the food systems you think have been successful?

MB: The Foundation is forwarding a food pyramid. It is a very interesting concept that is in development. Previously, it was based on the Mediterranean Diet.

The food system indicators that they are developing are also noteworthy. In terms of a framework for the future, that pyramid and those indices are important for other regions. Other parts of the world can use these models to assess their own food systems.

After participating in one of the Foundation’s events, we organised our own event in Africa. We held the African Food System Summit last year. It was a very large activity and served as an example of what is happening in other parts of the globe.

What is really interesting is the composition of the board. There are people who are in touch with how the politics goes in Europe. There are scientists, really high-level scientists who are working on the impacts of a bad food system. There are university researchers who bring a different perspective and I bring the civil society and social movement side.