GoGold Resources Inc. is pleased to release the results of 9 new drill holes from the Casados deposit in the Los Ricos North project.  GoGold’s geological mapping program has located a series of historical workings along NNW trending veins that splay off the main Casados Vein along a horsetail structure (see Figure 4 for a plan view map and Figure 5 for a sampling map).  Drill hole LRGSC-21-038 intersected a vein in the Casados North zone close to surface and averaged 830 g/t silver equivalent (“AgEq”) over 2.6m and includes a 0.8m interval of 2,835 g/t AgEq.  See Table 1 for breakdown of silver and gold values. 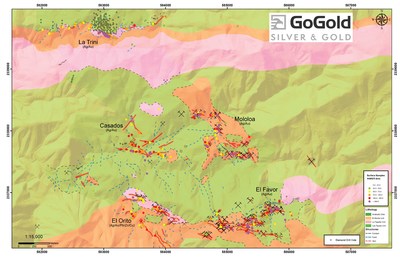 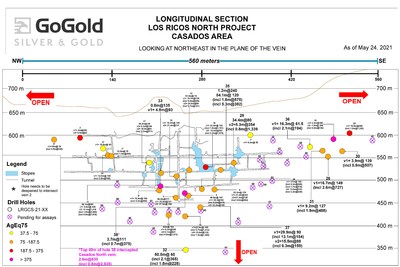 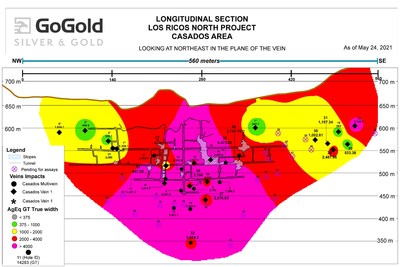 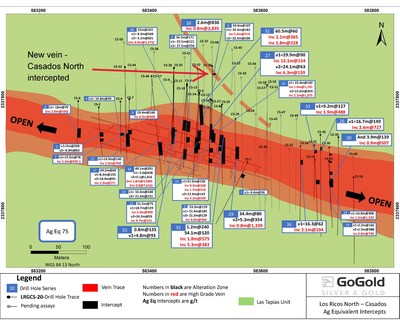 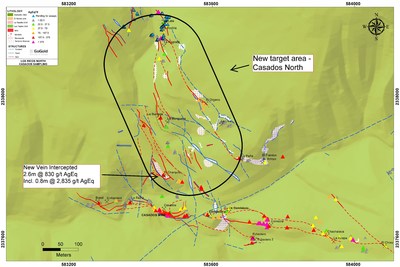 “Mapping on the Casados North zone has paid off with the intercept of multiple kilos in hole 38,” said Brad Langille, President and CEO.  “We will continue to explore the Casados North zone as new discoveries like this will be favourable for our upcoming Los Ricos North maiden resource to be released later this year.”

The Casados Veins strike nearly E-W, dips 45o to the north and is hosted in andesitic tuffs and is exposed on surface for about 400 metres along strike.  In the 7 metres of old stope that is above the water level at the Casados mine, the vein shows as a zone of quartz stringers about a meter wide, but at other places it is more than 2 metres wide.  A zone of silicification up to 50 metres wide envelopes the vein and this resistant outcrop forms a steep ridge along the strike of the vein, particularly on the north or hanging wall side.

Casados NorthA series of low sulphidation epithermal quartz veins have been mapped over an area of 800m x 400m extending on a NNW trend from the area of the Casados mine.  The veins are exposed in a dozen historical shallow workings and chip sampling has returned high silver and gold values.  Drill hole LRGCS-21-038, targeted to test below the Casados mine workings, has intersected one of these new veins close to surface.  See Figure 5 for a map.

VRIFY is a platform being used by companies to communicate with investors using 360° virtual tours of remote mining assets, 3D models and interactive presentations. VRIFY can be accessed by website and with the VRIFY iOS and Android apps.

The VRIFY Slide Deck and 3D Presentation for GoGold can be viewed at: https://vrify.com/explore/decks/9404 and on the Company’s website at: www.gogoldresources.com.

The Los Ricos North Project was launched in March 2020 and includes drilling at the El Favor, La Trini, Casados and El Orito targets.  During 2020, GoGold’s exploration team identified over 100 targets on the Los Ricos North properties, demonstrating the significant exploration potential.  The Company plans to drill 10 of these targets as part of its 2021 drilling program which is planned to exceed 100,000 metres of drilling and will be one of the largest in Mexico.

Procedure, Quality Assurance / Quality Control and Data Verification The diamond drill core (HQ size) is geologically logged, photographed and marked for sampling. When the sample lengths are determined, the full core is sawn with a diamond blade core saw with one half of the core being bagged and tagged for assay. The remaining half portion is returned to the core trays for storage and/or for metallurgical test work.

Quality assurance and quality control (“QA/QC”) procedures monitor the chain-of-custody of the samples and includes the systematic insertion and monitoring of appropriate reference materials (certified standards, blanks and duplicates) into the sample strings. The results of the assaying of the QA/QC material included in each batch are tracked to ensure the integrity of the assay data.  All results stated in this announcement have passed GoGold’s QA/QC protocols.

Mr. David Duncan, P. Geo. is the qualified person as defined by National Instrument 43-101 and is responsible for the technical information of this release.

About GoGold ResourcesGoGold Resources is a Canadian-based silver and gold producer focused on operating, developing, exploring and acquiring high quality projects in Mexico.  The Company operates the Parral Tailings mine in the state of Chihuahua and has the Los Ricos South and Los Ricos North exploration projects in the state of Jalisco. Headquartered in Halifax, NS, GoGold is building a portfolio of low cost, high margin projects. For more information visit gogoldresources.com.