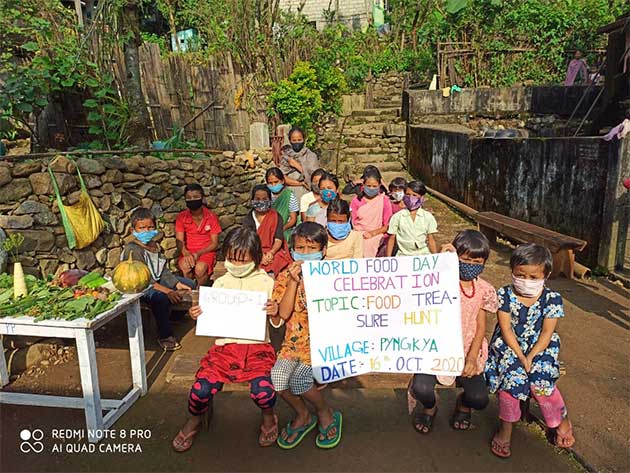 Oct 19 2020 – World Food Day, a day dedicated to tackle world hunger, is annually celebrated on October 16, 2020 globally. To commemorate this day, the North East Slow Food and Agrobiodiversity Society (NESFAS) along with its partner organisations — Society for Urban and Rural Empowerment (SURE) and North East Network (NEN), Nagaland — hosted several programmes across 27 communities in Meghalaya and Nagaland. It may be mentioned here that all government SOPs and measures were followed during the events.

In his message from Rome, NESFAS chairman and coordinator of The Indigenous Partnership, Phrang Roy said, “As we celebrate the World Food Day with our 130 indigenous partner communities of North East India and as we work to ‘grow, nourish and sustain, together’, let us remind ourselves that in areas where our traditional culture, our oral traditions, our living in balance with nature and with each other have been upheld, we have prospered.” He added, “ This World Food Day is therefore an opportunity for us, as indigenous peoples, to show and tell to our national and international leaders that our traditional indigenous food systems and our biological and cultural diversity are crucial instruments for a more caring and sustainable world.”

Keeping in mind the theme for this year’s celebration — Grow, Nourish, Sustain. Together — at Pyngkya (East Khasi Hills), community members hosted a Food Group treasure hunt for the children wherein the participants were divided into three groups. The children were then sent to the nearby forest and cultivation fields, along with adults, to forage the 10 food groups under one hour.

In Khweng and Madanrtiang (Ri-Bhoi), Participatory Guarantee System (PGS) and Agroecology Learning Circle (ALC) members organised a drawing competition for children at their respective communities. An Agrobiodiversity (ABD) competition was also held where community members were asked to identify the different food plants at their communities. In the evening, a few Anganwadi workers along with some of the ALC members held an awareness programme and spoke about the importance to conserve agrobiodiversity and local foods. 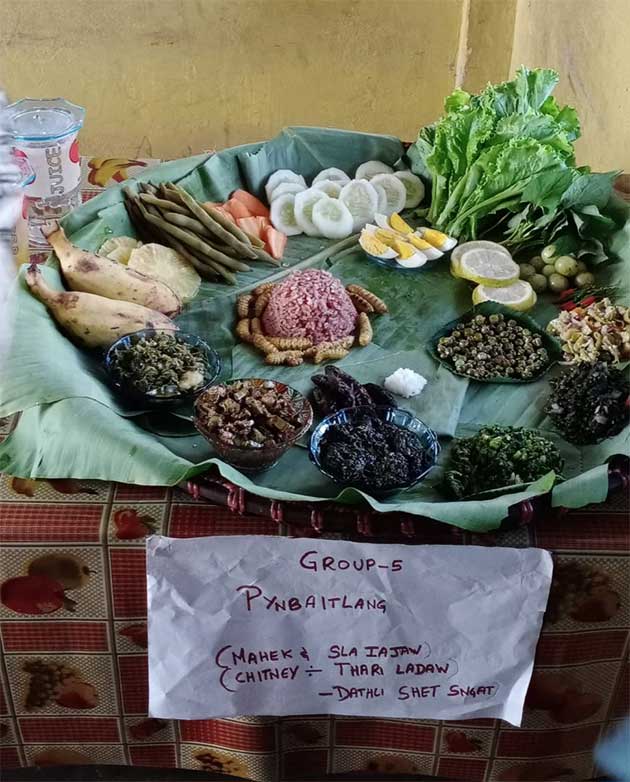 The NESFAS team in Garo Hills, marked the occasion in Samingre, West Garo Hills along with other partner communities — Darichikgre, Daribokgre and Durakantragre — where in the community facilitators took part in a seed-exchange programme. The programme also included sharing of knowledge on the importance of the Indigenous Food Systems by the CFs from Darichikgre, Daribokgre and Durakantragre. Chenxiang R Marak, Associate of NESFAS (Garo Hills) said, “The CFs also spoke about the importance of seeds and right after that, there was an exchange of seeds between these four communities. These are all traditional and local seeds that were exchanged to ensure seed sovereignty.” The Samingre Self Help Groups also sold fresh local vegetables and value added products at the venue.

NEN, on the other hand, organised a cooking competition for rural youth at the NEN Resource Centre at Chizami, Phek District, Nagaland under this year’s theme. The event brought together 65 participants, mostly youth members from Chizami and neighbouring villages. The focus of the programme was to bridge the growing gap between young people and local food systems. It is an attempt to help the youth understand the significance of local food, rediscover and appreciate traditional recipes, explore and exchange innovative recipes using local ingredients.

Three partner communities of SURE on the other hand celebrated the day hosting an essay competition and a recitation competition in Cham Cham (Jaintia Hills), an ABD walk in Thangbuli and a indigenous food cooking competition in Mukhap. Participants were only allowed to cook indigenous meals using traditional and local ingredients only.