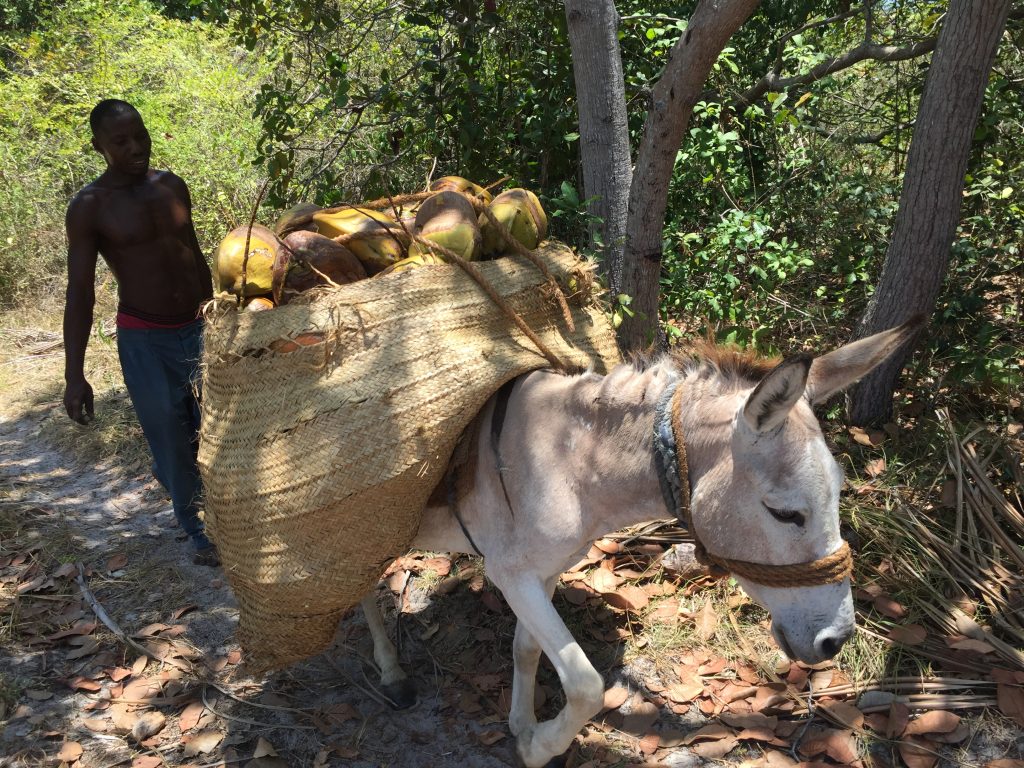 Coconut farmers in Mafia Island, Tanzania, rely solely on donkeys as the mode of transporting their products from farms to markets. Credit: Alexander Makotta/IPS

DAR ES SALAAM, Tanzania, Jun 19 2020 (IPS) – As she says goodbye to a group of her friends, Esther Ishabakaki asks whether any of them knows a good tailor who might be interested in joining her newly-opened clothing business. It’s a venture she started three months ago after quitting her farming venture.

Setting up a greenhouse in Tanzania’s commercial city, Dar es Salaam, Ishabakaki started by attempting to grow tomatoes. But a series of challenges chipped away at her passion and dreams for a horticulture business.

“I had invested a lot in that business: money, time, even emotion. But when you fall at every hurdle, it reaches a point where you just give up. I concluded I better quit and trial a different business,” 35-year-old Ishabakaki tells IPS.

Inexperience in greenhouse farming was a challenge when Ishabakaki started farming tomatoes. But while her skills improved as time went by, it was the post-harvest losses that she says she was unable to control.

After harvesting perfectly fine produce, Ishabakaki, like many millions of farmers, faced the gauntlet of preserving the quality and quantity of her crops before they reached the consumer.

Increasing domestic food demand and a rising unemployment rate are just some of the factors pushing governments across the continent to try and strengthen the agriculture sector, and Tanzania is no exception.

Unfortunately, Ishabakaki’s experience with post-harvest losses is not unique. Experts say it resonates with many youth and farmers at large in the country, and could be driving new entrants to quit the market.

“The problem of post-harvest losses in the agriculture sector is huge,” Adella Ng’atigwa, a researcher and agricultural economist at the Ministry of Agriculture, tells IPS. As a research fellow of the International Institute of Tropical Agriculture (IITA), Ng’atigwa is currently working on a policy brief that documents post-harvest losses the reasons for this, as well as outlining the obstacles that prevent the youth from participating in Tanzania’s agricultural sector.

She notes that some crops are more affected than others – cabbage farmers often report losses of up to 60 percent of their produce.

“Farmers in Njombe, in the southern highlands of Tanzania, told me that poor demand is a major cause of produce loss in the area. But I also noticed that poor handling of crops and lack of agronomic practices also contributes to this problem,” says Ng’atigwa.

She also pointed out that poor transportation and storage facilities and low quality packaging contributes to the problem.

But Ng’atigwa is hopeful that cooperation between the government and private sector could help resolve the problem.

“Public Private Partnership could invest in infrastructure development, like construction of pack houses and investment in agro-processing.

“This approach could be used to increase the frequency of youth training and awareness and the creation of horticultural Post-harvest Management innovations through extension officers,” she says.

In addition, Ng’atigwa says the government could lower taxes on post-harvest management initiatives, making their services more affordable and accessible to farmers.

Traders sell vegetable produce at the Darajani market in Zanzibar. According to research, certain produce such as cabbage and tomatoes are more prone to post-harvest losses than others. Credit: Alexander Makotta/IPS

The IITA, a non-profit that works with partners in Africa to enhance crop quality and productivity, is working to fill some of the gaps with regards to the challenges still facing the agriculture sector.

Through its youth programme, IITA says it helps young people turn their challenges into opportunities to create jobs for themselves and others.

The programme works from farm to fork, starting with seed sowing, through to marketing and all the way to processing the product for consumption.

“We have an incubation programme, where we train people to acquire skills for agribusiness, skills for entrepreneurial development, skills for management of different technical skills and then we prepare them to become businesspeople in agriculture,” Dr. Victor Manyong, IITA Director for Eastern Africa, tells IPS.

Manyong believes there are plentiful opportunities in agriculture for youth to make money; for example by increasing production at the farm level.

He confirms young people are keen to take on these opportunities, but often need help along the way.

“We have to change people’s mindset right from a young age, to embrace agriculture as a business just like any other business.

“Apart from that we have to employ the use of technology in this sector, not only to appeal to young people but also to increase efficiency in production,” Kimario tells IPS.

Regarding post-harvest losses, which continues to discourage young people like Ishabakaki, Kimario says the solution could be the market.

He says young farmers need to be trained to respond to the market demand with the type and volume of crops they grow.

“The market has to tell you what to produce, at what quantity, quality and time. If you are producing tomatoes for instance, you will know whether your market wants fresh or processed ones.”