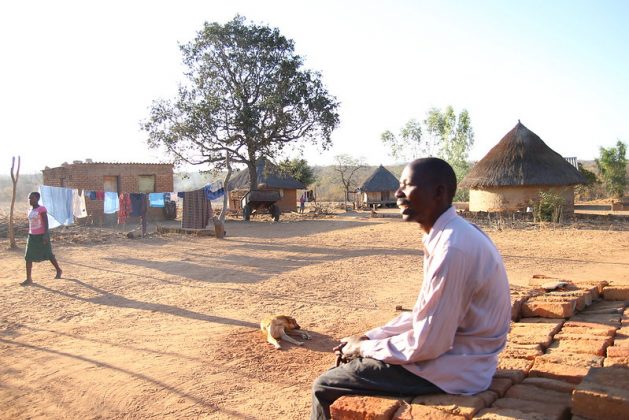 BULAWAYO, Mar 27 2020 (IPS) – “I have never planted a tree in my life,” laughs Jairos Saunyama, a tobacco farmer, revelling at the absurdity of the question of whether he is involved in the country’s afforestation efforts. Sawunyama is one of thousands of farmers who are blamed by local conservationists for turning the country’s forests into deserts and dust bowls.

Tobacco farmers use firewood to cure their product but this has come at a price for the country’s commitments to such international agreements as the United Nations Convention to Combat Desertification (UNCCD).

The country’s challenges with land degradation and desertification are not solely limited to small scale farmers. Wood fuel provides 61 percent of total energy supply, with 96 percent of the country’s rural households dependent on wood for fuel, according to a 2018 country report.

Perennial dry conditions have also seen Zimbabwe struggle with annual wild fires that have destroyed large tracts of land and damaged the soil, effectively providing the right conditions for turning parts of the country into mini deserts.

The UNCCD describes desertification as “land degradation in arid, semi-arid and dry sub-humid areas resulting from various factors including climatic variation and human activity. It affects the livelihoods of rural people in drylands, particularly the poor, who depend on livestock, crops, limited water resources and fuel wood.”

The description summarises the dilemma Zimbabwe finds itself in as in recent years the country has experienced an escalation of problems that has given rise to the degradation of the environment.

In addition to the wild fires, the United Nations Food and Agriculture Organisation (FAO) has also identified intensive cultivation and overgrazing as major causes of land degradation and desertification in Zimbabwe.

However, while it has appeared difficult to address these issues because of what FAO says is a “high proportion of the local communities depending on the land for their sustenance,” an ambitious afforestation programme could just be what will help Zimbabwe meet its multilateral obligations to address desertification and deforestation.

As part of the country’s broader efforts to address these challenges, the Sustainable Afforestation Association (SAA), formed by the country’s tobacco merchants in 2013, last year made commitments to plant at least 9 million eucalyptus trees annually after what was seen as the wanton destruction of woodlands by tobacco farmers and wild fires.

“Zimbabwe’s forest and woodland resources cover 45 percent down from 53 as at 2014 of the country’s total land area. Of the 45 percent, communal areas take 43 percent, resettlement and private land 24 percent and gazetted land including national parks 33 percent. Already this points to major deforestation,” Violet Makoto, the Forestry Commission spokesperson, tells IPS.

SAA says the initiative to plant 9 million eucalyptus trees and other drought-tolerant tree species is an attempt at conservation and “rejuvenating indigenous and commercial forests”.

“We have has selected varieties of eucalyptus which we believe are suitable for a particular area. Factors taken into account include climatic suitability, soils, disease resistance and growth rate,” Andrew Mills, SAA director tells IPS.

While Zimbabwe’s UNCCD focal point could not provide IPS with comment, Zimbabwe has made commitments to achieve land degradation neutrality (LDN) by 2030 and also restore 10 percent or up to 4 million hectares of forests.

However, government officials in Zimbabwe concede that achieving this remains a tall order.

“The issue [of land degradation] is beyond the country’s desire to meet obligations under the various multilateral environment agreements but is now a serious national concern. Enforcement of the law needs to be up-scaled if we are to get anywhere,” says Washington Zhakata, a director in the lands, agriculture, water, climate and rural resettlement ministry’s climate change department, tells IPS.

SAA’s efforts complement the government’s own programmes, which include a national tree planting day each first Saturday of December — a day Saunyama says he has never heard of — as well as conducting “education and awareness raising for LDN for policy makers, legislators, land users and general public” and “linking land degradation neutrality to the country’s developmental, employment creation and poverty reduction strategies”.

But as World Desertification and Drought Day approaches this June, these commitments seem a tough ask as challenges mount against  Zimbabwe’s undertaking to protect the environment.