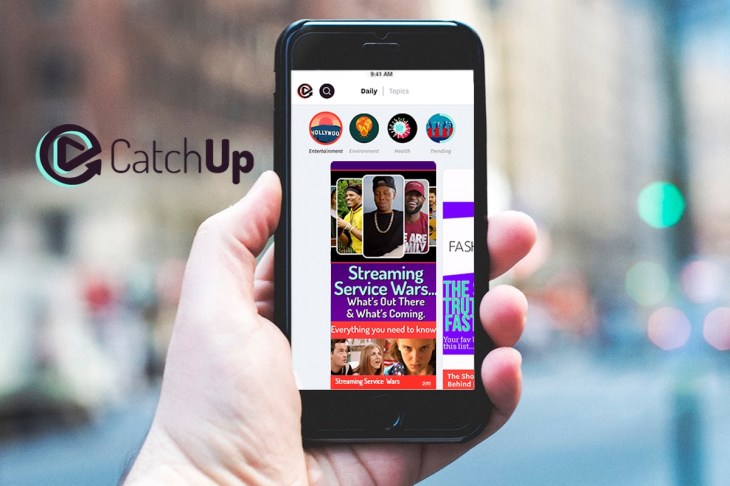 A new app called CatchUp might be useful for anyone who’s struggling to keep up with the latest headlines, podcasts and Netflix shows.

CatchUp is the latest offering from Mammoth Media, the startup behind chat fiction app Yarn and social polling app Wishbone. Founder and CEO Benoit Vatere told me that the product started out as a book summary app called Booknotes, but early users kept asking, “Why don’t you summarize more than books?”

So that’s exactly what CatchUp does, recapping the latest news and entertainment topics. The summaries should feel pretty familiar to anyone who’s watched videos on mobile social app — they’re vertically-oriented, broken up into slides, accompanied by text captions and last for just a few minutes.

Vatere told me that the topics are chosen based on what’s trending, either in Mammoth’s apps or more broadly in social media.

For example, when I opened CatchUp this morning, I watched a video laying out the basic info around the big topic one everyone’s mind: the coronavirus pandemic. Then I moved onto something lighter, a video breaking down the different streaming services available now.

It sounds like the CatchUp team is moving quickly. Vatere said they should be responsive to trends, creating new videos in just a day or two. At the same time, he said the app should offer a mix of news-y videos that will eventually disappear (“too much content kills retention in the app”) alongside more evergreen content.

He emphasized that this is very much an initial version of the app, and that the CatchUp team plans to iterate based on what users respond to. It’s English-only for now but could eventually add other languages. The company’s plans also include introducing monetization later on, starting with advertising and then eventually adding in-app purchases and subscriptions.

Vatere also suggested that while a CatchUp summary should stand on its own, it could also encourage deeper engagement.

“If you’re thinking, everybody is talking about ‘Love is Blind,’ what is this … you can listen for two minutes and understand the dynamic, understand what’s happening,” he said. “Then if it sounds really interesting to you, you can watch it. But if not, now you understand what’s being said.”