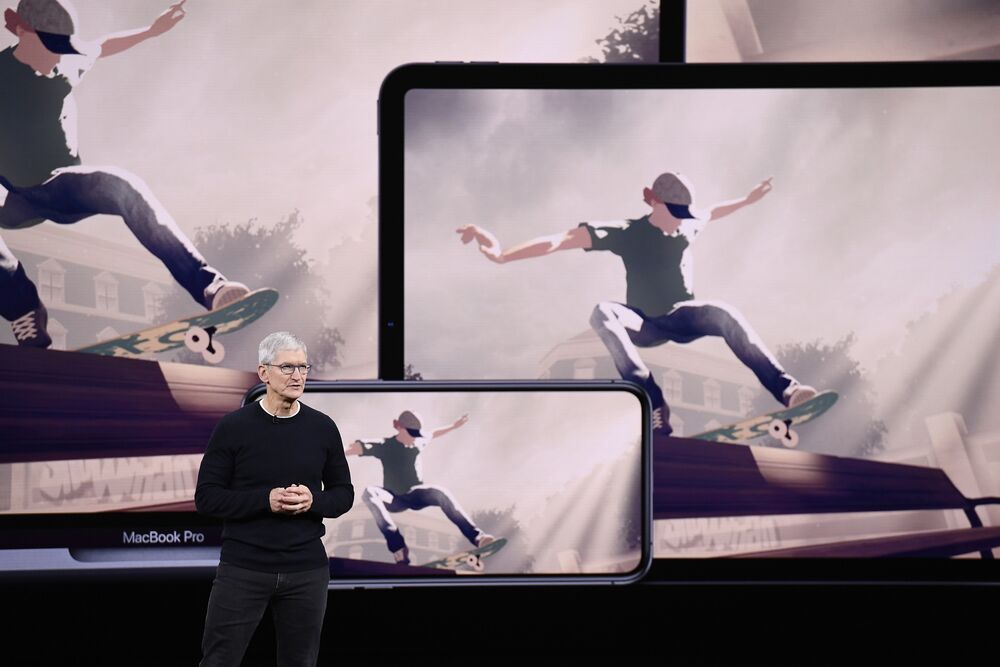 Video-game fans suddenly have their pick of a huge menu of titles thanks to a raft of new mobile subscription services from Apple Inc., Microsoft Corp., Alphabet Inc.’s Google and Nvidia Corp.

But for the more than 1 billion users of Apple’s iPhone and iPad, the only real option is Arcade, the subscription service launched by the company in September.

That’s because Apple imposes strict limits on the kinds of apps users can access on its devices. For example, App Store guidelines ban services that rely on streaming from the cloud. Arcade adheres to the requirements, in part, because it’s included as a feature within the App Store itself. This is the latest example of what critics say are arbitrary rules favoring Apple’s own apps at the expense of similar software from outside developers.

“There’s a fraught relationship between developers and Apple precisely because of rules like this,” said David Barnard, a longtime independent developer and advocate at RevenueCat. “In some ways, I am incredibly grateful to their marketplace for helping me make millions of dollars I wouldn’t have made without it. On the flip side, them being so heavy handed at times does kill apps and does cause developers to miss out on other potential revenue.”

If software developers want to reach as many consumers as possible, they have to be on Apple’s iOS. The operating system powers more than 1 billion smartphones and tablets and it’s the only way to access the iOS App Store, which accounted for 65% of app spending globally last year, according to Sensor Tower. The Cupertino, California-based company can also make or break mobile gaming businesses: More than half of the $62 billion spent on smartphone gaming last year happened on Apple products.

Cloud gaming services, where users stream games live over the internet, are growing in popularity, especially as faster fifth-generation, or 5G, wireless networks proliferate. The new offerings from Microsoft, Nvidia and Google are cloud streaming-based, while Apple Arcade is not. Those other services are found on the Android operating system, which powers 2.5 billion devices worldwide. Among the popular games found there, and missing from iOS, are Red Dead Redemption 2, Gears of War 5 and Destiny 2.

Asked about the challenge of reaching iPhone and iPad users with the chipmaker’s GeForce Now service, an Nvidia spokesperson said: “Ask Apple.”

Apple said its “customers enjoy great apps and games from millions of developers and gaming services can absolutely launch on the App Store” if they follow the App Review Guidelines, which means that games have to be submitted individually, allowing them to appear in App Store rankings and search. The company also said it intends to continue building on its relationships with developers and providing a level playing field.

“Developers can choose to reach all iPhone and iPad users over the web through Safari and other browsers on the App Store,” Apple said. But currently the new cloud-based gaming streaming services aren’t accessible through web browsers on iPhones and iPads.

Whether the restrictions raise antitrust issues is another matter. The policies were in place before the latest gaming services launched, and “I don’t see it cutting one way or the other,” said David Reichenberg, an antitrust lawyer at Cozen O’Connor.

Apple said there is strong competition in every category in which it makes its own apps. Arcade, only available on iOS, is $4.99 per month for more than 100 games and is a growing contributor to the company’s services revenue, which is important amid a period of reduced hardware sales growth.

At least one gaming subscription offering, GameClub, has managed to get on the App Store. It licensed several old-school games, released them all on the App Store as separate apps under one developer account and offers one $4.99 subscription that works across the apps. Still, it was rejected 127 times by Apple before being approved. “The amount of effort we put into making sure the app played by Apple’s rules was no joke, it was a huge undertaking,” Eli Hodapp, GameClub’s head of business development, said.

In February, Microsoft released a beta version of its gaming service, currently dubbed xCloud. It is still in free preview, but is expected to launch later this year as a paid service under the company’s Game Pass brand. A look at the software shows the contortions that it and other Arcade rivals will have to pull off to get on Apple’s system. While Microsoft’s has a catalog of 90 games available on Android, just one, Halo, appears on the iPhone test version. Redmond, Washington-based Microsoft and Mountain View, California-based Google declined to comment.

No Third-Party Games in Service

The Android variant of xCloud lets users choose from multiple games built by different publishers. A version of the app on iOS could only have games either developed or exclusively licensed by Microsoft.

Apple outlines this in an App Store rule that says “games offered in a game subscription must be owned or exclusively licensed by the developer.” For example, Microsoft’s iOS service can offer Halo because Microsoft produces that game, but not Ace Combat from Bandai Namco.

This restriction prevents game developers from being able to work with game partners already on other platforms. Apple said Arcade complies with all the guidelines. Microsoft makes several of its own games, but Google and Nvidia would only be able to launch if they exclusively licensed third-party titles. Google’s Stadia costs $9.99 per month and new games are added monthly. Nvidia offers free and $4.99 per month subscription tiers, but requires a user to login to a Valve Steam account to access many titles.

A related guideline bans the subscription services from carrying over upgrades like levels, extra weapons and characters unless they are also available as an in-app purchase in the App Store. Like many other apps, this gives Apple a 30% cut of revenue from developers, while confusing users who play video games on multiple platforms. It also means more overhead for developers.

No Single App with Playable Catalog

If a developer is able to build or license enough games for a service, they would still be prohibited from releasing an all-you-can-eat gaming subscription service on iOS that works inside of a single app.

Many games are available to be downloaded individually from their creators, but consumers increasingly like to subscribe to a bundle of games at a lower monthly price — much like they’d subscribe to Apple Music instead of downloading individual songs or sign up for Netflix instead of buying specific movies.

The same rule that bars non-exclusive titles requires that “each game must be downloaded directly from the App Store.” This means an app can’t include a catalog of games and must be broken up into separate apps. Apple said the guideline is to prevent games from being added or removed without review. Apple allows catalog apps for magazines, newspapers, music, videos and books.

“The App Store was created to be a safe and trusted place for customers to discover and download apps, and a great business opportunity for all developers,” Apple said. “Before they go on our store, all apps are reviewed against the same set of guidelines that are intended to protect customers and provide a fair and level playing field to developers.”

While a game developer could feasibly workaround the first few games-related guidelines, Apple’s decision to block games that stream directly from the cloud is an iOS deal-killer for Microsoft’s xCloud, Google’s Stadia and Nvidia’s GeForce NOW.

Apple’s rules state that “thin clients for cloud-based apps are not appropriate for the App Store.” This type of app does little on the device, with most of the action offloaded to remote data centers, much like how Netflix streams movies. In contrast, each Apple Arcade game runs fully on the device without the need to stream data from the cloud.

Cloud streaming works on an early test version of Microsoft’s app, but if a full app like that was submitted to the Apple App Store it would probably be rejected. Microsoft’s beta app is available currently to 10,000 users through an Apple testing service called TestFlight, which traditionally follows the same rules as the App Store.

Apple says that developers that publish games on the App Store benefit from features like Siri, backups and App Store promotion. Having to build a service without cloud streaming would be a lot more work for traditional game developers and would mean they have to re-create their apps for each platform rather than leverage their existing game libraries.

Apple lets devlopers use a technology called remote desktop. This is similar to cloud streaming, but instead of piping in content from a data center, the game is streamed from a Mac, Windows computer, or gaming console. This method comes with a major caveat: users can only stream from a computer or console that they own and the iPhone must be on the same network as the first device. That means you can stream a game in your living room, but not on the bus to work.

That has allowed apps like Sony’s PS4 Remote Play and Valve Steam Link. Microsoft xCloud for Android has a similar option for streaming from an Xbox, but the feature is missing from the iPhone. It’s unclear why Microsoft didn’t include it.

Major technology companies aren’t the only ones having trouble getting on the App Store. For months, one app from Shadow, a Paris-based cloud gaming developer, appeared to survive Apple’s rules. That changed at the end of February when Shadow’s platform was removed. Shadow relied on streaming games from PCs in a server farm, versus computers owned by users. Shadow said it’s talking to Apple about getting back on the App Store.