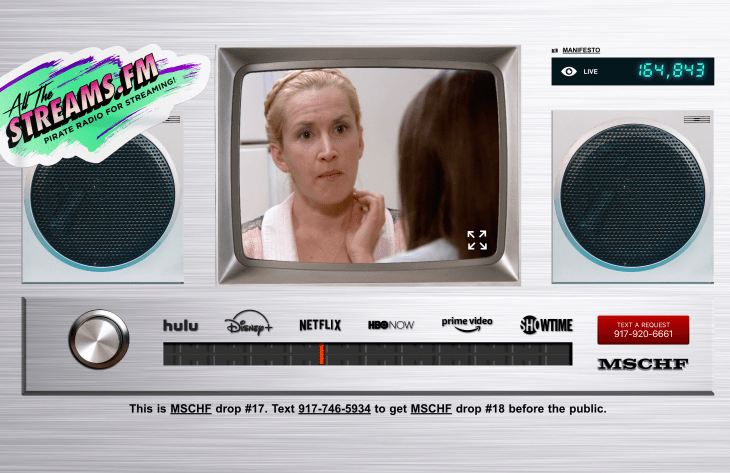 It’s very likely that you don’t know MSCHF. It’s also likely that you’ve come across one of their wild-ass projects. From “Jesus Shoes” filled with holy water to a collar that lets your dog finally tell you what it thinks about you to IRL loot crates that dare you not to open them — MSCHF has been launching highly viral stunts for the past year or so.

Hell, they even got a vanity piece in the Times while they’re still ascendant. Pure magic, given how famous the NYT has been at times for its ability to catch viral trends on the downslope.

The premise is that MSCHF has picked up subscriptions to Hulu, Disney+, Netflix,  HBONow, Prime Video and Showtime and it is broadcasting a continuous stream of one random program from each, live to anyone who hits the site. At time of publish, more than 100,000 people are currently watching one of the “channels.”

There’s even a pirate radio-esque commercial interstitial that will surprise you if you watch long enough. 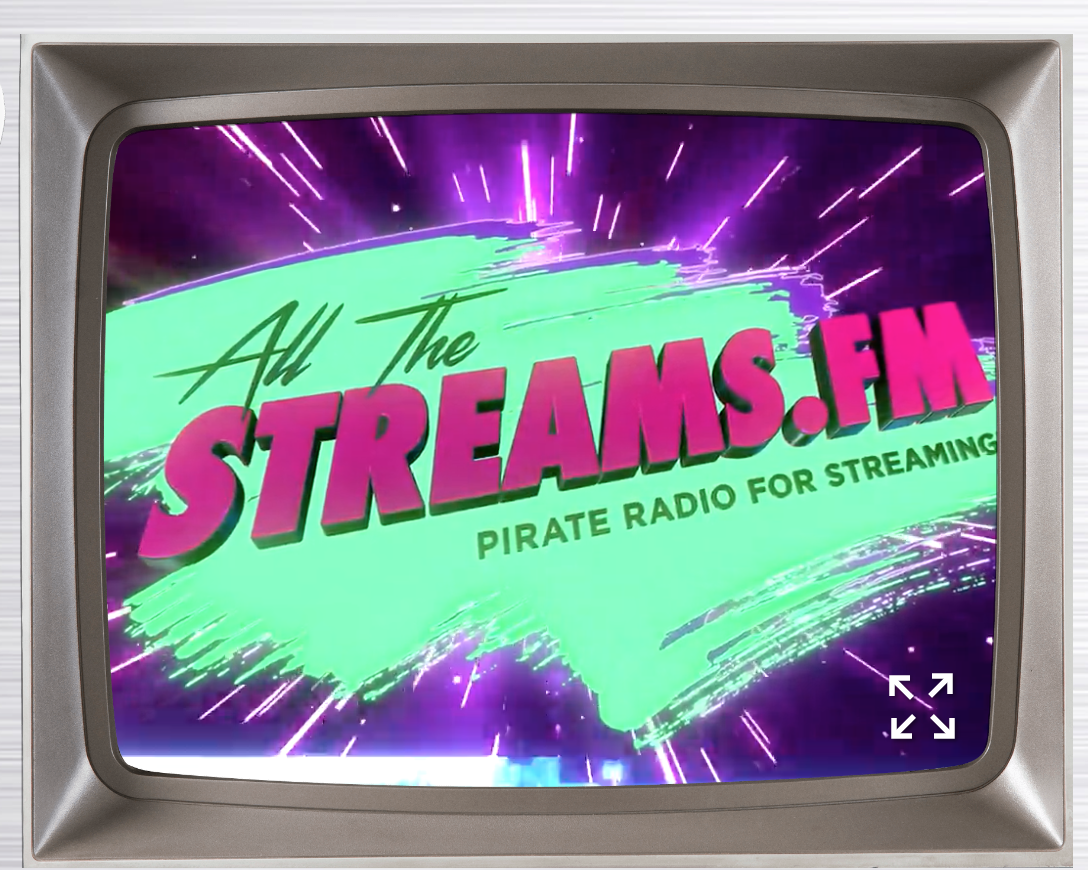 If you’re wondering whether this is legal, well, so did I. “We have a standard check with these types of things. Doesn’t mean it’s legal per se, but it means the risk profile is acceptable to us,” says Daniel Greenberg, one of MSCHF’s founding team.

The goal, Greenberg explained in a chat last week, is not to launch a product or company but instead to build a brand that stands for…something. Even MSCHF isn’t quite sure what that will be, though, by design.

Hell, even when asked to provide a succinct summary of what the fuck MSCHF actually is, Greenberg pushes back.

“MSCHF is a multi-angled mirror. Whenever we release something, people see different reflections of the same thing.”

I can’t actually argue, because even the latest stunt defies definition. MSCHF doesn’t earn anything from it, it’s a free stream. Though they have made money off of previous goods releases like the shoes or boxes, the goal is decidedly not to make money right now and instead to spend a great deal of it.

Though they’re reluctant to talk about it, MSCHF has raised $11.5 million in venture led by Laura Chau at Canaan Partners,  and others. Money that they seem intent on burning.

The MSCHF plan of attach (yes, attach) is based on a key ideal: that one of the strongest stances any brand could have is “no matter what.”

No matter what they sell, what road they take you down or how weird it is, you’re in. Even if an offering isn’t for you, you’ll be there when it is.

This thinking isn’t super rare these days, though the anarchist viral experiment framework is a new application.

The thought process behind modern brand building is becoming centered around the idea that the audience should come first, providing a reason for the product.

Influencer culture is probably the shorthand people would use the most, but being known for something and then using that to build out a durable direct-to-consumer brand is becoming vital for small creators and entrepreneurs that know that their conduit to their consumer is as fickle as the platforms they sit on. One too many references to reefer or sex and their livelihood could go poof. Not so much if your audience will follow you wherever you go.

A new cluster of slow food brand builders is carving out their own path to this durability.

Even more so as the ad business becomes a media business. Though MSCHF is very decidedly not yet a merchandise brand, it absolutely has marketed and sold merchandise — extremely effectively too.

But that ability to do so came from not trying to build any real business at all. MSCHF is, by Greenberg’s own admission, just spending money to create attention. No more, no less. What sets it apart from any other marketing effort, in my opinion, is the tone-perfect nature of those experiments.

The average MSCHF stunt (that’s what they are, for sure) is funny, hotly traded in a particular vertical or ideally across several verticals — that have high audience counts and a natural tendency to amplify. The biggest hits of the company so far have traded on the base powers of the internet, like pets and profanity — but every one of them has something super interesting going on.

Each idea comes out of a regular weekly meeting that the team has to throw out potential ideas. They’re then picked out and refined over weeks or months and “dropped” in a manner that resembles limited-edition streetwear or collectibles. Every ounce of a MSCHF stunt is viral muscle, no fat. And every one of them goes over like crazy on the ‘net.

Even the ideals that surround each experiment are loosely held. The cleverness evident here is that by defining the goals too clearly you lose the ability for people to attach their own personal vibes and therefore get invested.

“Streaming is a mass common denominator,” Greenberg offers by way of reason for this particular drop. “We all use it. We all have feelings on it. We all hate paying more and more for it. Why not now?”

There are some interesting things about this particular experiment that bear some pondering, outside of the stunt-based brand building apparatus that MSCHF has set up. In poking around at it I found myself watching several of the brands’ “hot” shows that I never actually got around to seeing.

A “random” button could actually be a nice advertisement for content (Netflix tested a random shuffle feature last year) for any streaming platform, given the well-documented issues people have picking something to watch.

There’s also the side-by-side comparison that you get to draw between the plans of attack of the various entities. Disney is BRAND FIRST, Netflix is new money premium content, Showtime is mostly old with a couple really good ones and HBO  is the grandaddy trying to stay relevant.

For what it’s worth, there’s also an interesting side point here in how they gather zero data on watching behavior other than pure traffic — and given MSCHF’s repertoire, the side point is probably also a point.

But, as with all of MSCHF’s projects, the takeaways may just be the things I’m bringing to the table.

That interchange of ideas is one of the things that sets MSCHF apart from a lot of brands that have manufactured interest in their products. It generates brand loyalty no matter what is being sold — which in turn results in durability.

One guarantee is that whatever MSCHF drops next, a metric ton of people are going to be interested. No matter what.