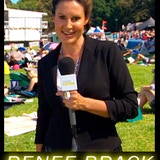 Written and directed by journalist Renee Brack, Ticketyboo shares the relationship with her late father, Thom Brack, a talented artist. Through Renee’s personal experience and interviews with experts, this documentary aims to empower families impacted by dementia and change the industry landscape and government policies on how we care for people living with dementia.

*We have almost funded this documentary and we need just an extra $12,000 to get it over the line and greenlit.

As my father’s dementia progressed, when I asked him how he was feeling he always answered Ticketyboo – a British term for ‘all in working order’. But I knew it was not. He would go missing on long walks, his art morphed from realist to surrealism and he would be convinced his paintings were talking to him. Navigating this new world was heartbreaking. Could I have done more for my dad?

My questions lead me to a global exploration of innovative thinking and an investigation of how different cultures including Indigenous Australian, Greek, Asian and Middle Eastern communities care for their loved ones living with dementia.

I have over 20 years experience as a journalist. I have delved deep with politicians, celebrities and criminals but this will be the most researched, most personal story I have ever told.

Why I’m passionate about dementia

50 million people worldwide are living with dementia. This is estimated to triple by 2050. Dementia is now the leading cause of death for Australian women.

From mine and my family’s personal experience I know that caring for a loved one with dementia is confusing and overwhelming. This documentary aims to give knowledge, hope and practical support to families and carers of people living with dementia.

But on  a greater scale, the Royal Commission findings make me sick to my stomach. The Commission found service shortfalls, serious substandard and unsafe care and an “underpaid, undervalued and insufficiently trained” staffing.

As a nation we can do better. My interviews with people living with dementia, the community of innovative researchers and dementia forward businesses has shown that initiatives such as early screening before 65, a move to in-home and group-home care with larger disability allowances and mandated minimum staff to resident ratios can make an immediate difference. With community support these changes are within our control. People with dementia should be treated as having a disability and needing rehab & support to live their lives as they wish.

Our Collaborators and Supporters

The project has been approved by the Documentary Australia Foundation allowing individuals, corporate donors and foundations to make tax deductible contributions to the making of the documentary. See documentaryaustralia.com.au for details. We have a LOI from Umbrella Films for a theatrical distribution in Australia and the international film festival circuit. We will look to support from Screen Australia and dementia friendly corporates but we now need just an extra $12K to make the project a reality.

Every dollar raised via kickstarter will join with existing funds to support the production of the documentary.

Ellenor Cox is an executive coach, mentor and screen sector strategist who heralds from a 20+ year career as an International Emmy® and AACTA award winning producer.

Ellenor has been responsible for the production of close to 150 hours of television and films which have screened on all the major networks and many of the industry’s most prestigious film festivals.

Pieter de Vries ACS, is one of the leading documentary cinematographers in the world.

His career has seen him filming the Red Army in China, rats in the sewers of New York, and the wreck of the Titanic with director James Cameron. His numerous awards have included Cinematographer of the Year, and an Emmy nomination. His work has featured on NBC, BBC, History, Discovery and National Geographic Channels and ABC.

The challenge we have will be to get this documentary in front of policy makers and industry leaders in order to make change. We plan to partner with organisations like Dementia Australia and advocates like Dementia Alliance International to open doors.