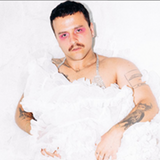 Dion lives in rural Gwynedd, North Wales where he is torn between a love for his traditional home and his queer identity. Ignited by the arrival of outsider Jude, but threatened exposure by the local boys who have it out for him, Dion must choose between slipping underneath the radar or being visibly himself in all its glory

Men I Trust is a queer psychedelic love story about gender non-conforming Dion growing up in Gwynedd, falling in love with outside Jude, who has just moved to town from London. It follows their clandestine, tentative love affair – experimenting with their gender and sexuality in the wilds of North Wales. Idyllic at first, until the other boys in the village get wind of what’s going on, and decide on other plans. All the while, the story is underpinned by Dion’s connection to Wales’ ancient history and mythology – guided by figures from (traditionally hyper-masculine) Celtic folklore, he is visited by spirits from his country’s mythos who guide him on his path to being visibly, unashamedly queer. The film is bilingual, written in both Welsh & English.

Many queer people spend their developing years searching for some sign that they are not alone. For me, I was desperate for evidence that there were other people who did not feel comfortable with being one gender or the other – people who live outside the binary.

This is particularity important within rural communities like Gwynedd, North Wales, where attitudes towards gender and sexuality move at a different pace to the bubbles of London and other cities. Consequently, many queer people feel conflicted about the communities they grew up in. The landscape, spaces and the people within are tainted for them, reminding them of their otherness and oppression. Their hometowns and villages are shunned and the communities that did not accept them, now a bitter reminder of their internal suffering. I want to show them that you can reclaim your formative spaces, reimagining the physical landscape as an accepting and loving environment, one where they can belong.

Dion, as a character is a vehicle for this duality – you love your home, but your home doesn’t know how to make space for you yet. This dual nature serves as a good story device – it creates tension and sets the intention for the protagonist, but it is also inherently non-binary – two opposing worlds at odds in a character, two genders in one person – “are you a boy or a girl?” I am neither. I am both. I am I. We are at a tipping point now in terms of gender – there are a lot of conversations in the media being had about us, but they are fraught with inaccuracies, and rarely do they actually involve us or consult us.

We need proper LGBT representation in film, and in film especially because overly cerebral analysis in the news is one thing – but a well-told story can reclaim the narrative for the community, and shows the authentic, human side of what it means to be queer. Men I Trust is a film for anyone who has felt ‘othered’ and in particular for people like me, living in marginalized communities, who deserve to be shown an alternative world, one where they can be free to identify however they like, and love whoever they want – right where they are, now. I want to make a film in which young trans and GNC people can reimagine themselves as beautiful, soft, capable of authentic experiences, both sexual and emotional, free from shame. Just like anyone else.

In a way, this story is my story. I grew up in this place and I have a deep love for it. I spent hours in the quarries and forests, creating a fantasy world in which Gender did not exist. Dinorwic, in its own way, provided that for me. But I also intimately know the incredible people and culture of the space, and this is intrinsic to the making of the film – I don’t want to make something that ridicules or disregards it’s setting – the queerness and fantasy of the film is inextricably tied to the tradition and community.

There is a reason that I made the decision to have Dion visited by these spectres, and why they come from so far back in Welsh Mythos – These characters are always represented as hyper-masculine, heterosexual heroes, but why shouldn’t they be queer? Why shouldn’t the landscape offer up guidance to a desperately confused non-binary teenager just as readily to a straight hero who can’t pull the sword from the stone? why shouldn’t Blodeuwedd have been trans? Who’s to say Owain wasn’t a proud gay man? There is evidence of gender non-conforming people as far back as the ottoman empire – why not in Wales?

It is important to note that this is intended as an experimental film – the aim is to break convention both with filming style, script & production.

WHAT WE HAVE & WHAT WE NEED

We have been lucky enough to receive a 10k grant from BFI Ffilm cymru, but this is an extremely ambitious film – We need additional funds to help cover above the line costs, post-production and festival entries. This is a story that we believe is of vital importance to tell and to make sure it gets the best reach possible, we need more money!

The main challenges for this project are logistical – we will need additional funding to help transport kit, generators & cast to set – Catering, accommodation and other above the line costs.