5 Chapters of Pain: Chapter 1 , Immigration A stripped back and honest look at an Angolan songstress’ life, in chapters 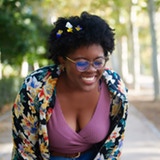 My name is Kanonia and I am a singer-songwiter-composer from Angola. I have been writing autobiographical songs in diaries and notebooks ever since I can remember; my teenage years were pretty much a blur of me telling everybody that one day I would be signed to the label of my dreams — *cough cough* Glassnote — and playing my songs on stages all over the world, with dozens of people singing them back to me. I told them that one day my songs would mean as much to people as songs such as ” I follow rivers ” by Lykke Li and ” Every Teardrop is a Waterfall” by Coldplay meant to me.

However, the older I got, the less bold I became about following those dreams until one day, I stopped talking to people about them altogether. In this place of introspection and self doubt, that naturally and unfortunately comes hand in with “adulting”, I talked myself into believing that some dreams were just too big to bear on your own and that although dreaming was free, it always came at a cost. I shelved all my songs at 19 and worked on getting a “real job” with “real career” prospects– I worked really hard at that too. In those bleaker years, I settled for just writing in my diaries and notebooks as this was the only way I knew how to cope in general. Although it slowed down the ever increasing lull of unhappiness and sense of unfilfillment, I knew that at the back of my mind this animosity was always there.

At the top of every mountain, I would look down and feel like I had climbed the wrong one; on the outside I always seemed fine but on the inside I knew that no matter how much money I made, no matter where I went, if I was not being true to myself by making music that moved my soul then the battles I’d waged and won with my past (and the unfavorable circumstances I had been born into ) would have all been for nothing. With this thought, I lined up all my notebooks and diaries in front of me one night and started looking for patterns and overarching themes in the words I had written down in those years of musical inactivity. I picked up my guitar and worked on finishing all of my old songs too, songs I had started writing when I was still in high school, my past and present intertwined, and over 4 years worth of songs and notes I’d written to myself came together to form what I now know (and what you will soon know) as my very very personal “5 Chapters of Pain” project.

In early 2019, with the birth of this project I knew that I needed more opportunities to perform it live, so I formed a band to help me bring all of my songs and stories to life and after months of playing my songs around Madrid, I have decided to launch this project here, on Kickstarter, as part of my next step towards self fulfilment.

The first chapter of this project is titled “Immigration” . It not only belongs to me but it also belongs to you: everybody who has ever come to my shows or reached out to me, or showed me love in any way. This chapter is an ode to our collective struggles as immigrants, as travellers and as wanderers. The funds raised in this campaign will go towards:

– Recording and promoting Chapter 1, Immigration :  there are three songs in this Chapter: Visas, Just Waiting and Canada

-Recording of a lyric video for Visas

– Paying the wonderful musicians I work with (if you choose a living room concert as a reward, which I — biasedly — recommend!)

I would love to have this first Chapter released in late March of 2020, and with your funding, the cost of turning my dreams into a reality can be a shared one! Maybe my songs might not end up meaning as much to you as Every Teardrop is a Waterfall means to me, but how great would it be to say that you had a hand at helping me publish my first proffesional, solo project?

Thank you for reading!

Concerning risks and challenges, I have to honestly say that there are very few to none. The only limitations I have encountered during the creation of this project were personal ones. Now that I am very aware of the fact that I am my own worst enemy, I have surrounded myself with a team of people who would love to see me succeed just as much as I once did when I was first starting out. Now that I have completed the writing process of all of the songs, and have finished the arrangement for three out of five of these chapters (non of which affect the delivery of any of the rewards in this campaign), I am confident that with your help I can squelch my biggest challenge so far: Funding!