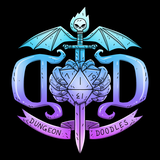 Playing tabletop role playing games with kids is hit or miss and rulebooks can sometimes be overwhelming, certainly for younger players. My goal here is to present an easier way for kids to identify stat blocks and encourage not only gameplay, but also creation. I know my kids usually only want to know a few key stats such as how many “hearts” a creature has and how many “squares” that creature can move.

This deck will feature 52 Creature Cards with a range of challenge levels for use with the fifth edition of the world’s most popular role playing game.

What’s in the deck?

What creatures are included?

A wide variety of challenge levels will be featured in the first deck of Creature Cards.

Will there be more sets in the future?

If all goes well and there is enough of an interest, I do plan on creating more decks in the future, including items, etc. Thanks for your support and happy gaming!

After the Kickstarter is over, your credit card will be charged for your pledge amount. A survey will be emailed to you shortly after to collect shipping information.

This will be my third time having a deck printed and have had zero problems in the past so I think we should be good. All art and layouts are done by me so we’re good there as well. Artwork is not final and subject to change ©Matt Sinor