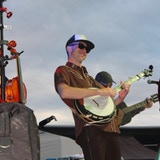 Hi  and neighbors Since you’re reading this, you probably already know me and you know that I’ve played banjo with the six dollar string band for the better part of the last decade. We’ve always been interested in being a traditional old time string band but nonetheless, our approach has become more and more progressive. I realized that through playing together, we’ve really developed our own style of string band music that reflects Colorado’s unique music scene. We’ve had a lot of fun making recordings over the years and we have some really exciting projects rolling out in the next few months. However, In the meantime, I’ve started this project to have the chance to record some of my ideas about the clawhammer style that I’ve used with the Six Dollar String Band. I’d be honored if you would consider backing me. Thanks for your support!

Studio time is always risky but we are so lucky to work with a great engineer in our home. We’ve been in the studio many times already and know what it takes to be efficient.