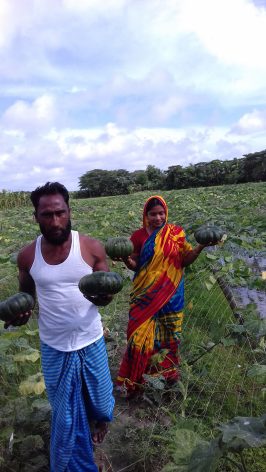 BHOLA, Bangladesh, Nov 28 2019 (IPS) – It was almost a decade ago when Ruma Begum and her family left their home in Bangladesh’s coastal Tazumuddin upazila or sub-district and travelled some 50 km away to start a new life. They had been driven out of their home by an extreme and changing climate that has continued to ravage the district of Bhola.

“Due to river erosion and salinity intrusion in agriculture in Tazimuddin where we lived in the past, we were compelled to migrate to Charhazarigong leaving everything behind. But our early days were not so easy as there was no adequate livelihood options,” Ruma, a mother of two, told IPS about her family’s 2010 move to Char Fassion upazila in Charhazarigong union.

When you can’t run from a changing climate

In Char Fassion upazila, about 80 percent of the 1,650 families comprise climate migrants.

When Ruma’s family first arrived there her husband began work as a day labourer and then later as a smallholder farmer on a leased piece of agricultural land. But they had moved from one coastal area to another and her husband did not produce many crops because of saltwater intrusion, regular floods and recurrent cyclones.

Mahmud Hassan, Additional Secretary from the Ministry of Environment, Forest and Climate Change, told IPS, “Bangladesh is experiencing natural calamities like cyclones and frequent floods, which affect negatively the lives and livelihoods of coastal population.”

When farmers don’t know what to do

When they couldn’t grow rice, Ruma’s family tried to cultivate vegetables. But until last year the crop continued to be damaged because of saltwater intrusion.

“So we had to pass very hard days with one son and a girl child. That time, my children suffered from malnutrition as most of the days we remained hungry for lack of food,” Ruma remembered.

There weren’t the only ones.

Sazzad Hossain Talukder, the Tazimuddin Upazila Agriculture Officer, said due to the saltwater intrusion and waterlogging, which occurred after cyclones and floods, coastal communities had been failing to produce enough crops and vegetable.

The 24 other families with whom they had migrated from Tazimuddin with also experienced the same crop failure, Ruma acknowledged.

But they didn’t know what to do or how to adapt. Maruf Hossain Minar, senior fisheries officer of Char Fassion, said for more than a decade local communities who lost crops and vegetables because of extreme climatic events did not know how to adapt.

But in 2017, with support from United Nation’s development agency’s Integrating Community-based Adaptation into Afforestation and Reforestation Programme (ICBA-AR), the sluice water gates by the district were renovated, bringing an end to the saltwater intrusion. The U.N. Development Programme (UNDP) also implemented a project to help vulnerable coastal communities adapt through teaching them livelihood diversification and linking that to forest stewardship.

According to UNDP, the project is being implemented in four of Bangladesh’s most vulnerable coastal districts of Patuakhali, Barguna, Bhola and Noakhali.

Thanks to the project, people are able to produce crops again, but this time they have been taught about integrated agriculture, which Penn State University explains as “farming systems with environmental, economic, social, and intergenerational sustainability”.

According to Talukder, the farmers can now harvest their crops three times a year as opposed to twice yearly as in previous years.

“The ICBA-AR project provides climate resilient diversified livelihood support to 10,500 coastal, poor households to adapt … to climate change. Most of the livelihood interventions of the project … are helping to meet the nutritional demand of the coastal poor households significantly,” Hassan, who is also the national project director of ICBA-AR, said.

It has also provided food security for coastal farmers.

“Earlier we cultivated only vegetables. If there was a cyclone or a flood it got damaged and we had a deep shortage. But now if the vegetables are damaged we can benefit by fish farming,” she added.

Another farmer, Ibrahim Miah, said poor people like himself could not previously purchase vegetables for their diets because of their restricted incomes.

He told IPS that the cultivation of floating vegetables worked well for those who didn’t have access to land that was not vulnerable to becoming flooded or waterlogged.

“Once we had a very hardship in the family. We could not effort three meals [a day] even. Now the situation has changed. Now there is no food crisis and hunger in my family,” Ruma said.