Taglioni Dance Film An original dance film based on the true story about famous ballerina Marie Taglioni, in collaboration with English National Ballet 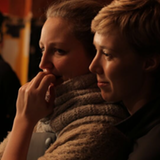 We are making an original dance film based on the true story of Marie Taglioni – the first ballerina ever to go ‘en pointe’. Following her death her pointe shoes were sold at auction, cooked and then eaten at a dinner party by fans. This is the starting point for our dance film, a surreal fantasy made in collaboration with English National Ballet whose dancers will be appearing in the dramatic final scene.

Since 2006 Jess and Morgs have been making original films together, using humour, narrative and physical comedy to push the boundaries of dance film. To realise the project thus far,  we enjoyed the support from Arts Council England project funding and  in-kind from partner organisations, but to bring it to a high quality completion we need the help of people like you.

The creation phase of the project began in July 2019 when we filmed the final climactic scene using the wonderful dancers of English National Ballet Company. Your investment now, will:

Donations, whether large or small,  will help us to bring our film to life. We have a large variety of rewards, from the chance to watch a rehearsal, have your name in the credits, come on set, or even to feature in the film yourself!

“Jess and Morgs are an original and fresh voice in dance film. Their work is accessible and innovative, and should be supported.”

Crowdfunding film made by Richard Perryman.

The majority of the funding for the film is already secured with support from Arts Council England. We have received additional support from our project partners, including, English National Ballet and Channel 4 Random Acts, as well as rehearsal space in-kind from Studio Wayne McGregor and Here East. Jess and Morgs are supported by Studio Wayne McGregor through the FreeSpace programme

We have additional in-kind support from Technicolour post production, to make sure that the colour grade and online mix are completed to the highest quality. Alongside Channel 4 Random Acts and English National Ballet’s online platforms, we have International support from Choreoscope Festival (Barcelona) and a festival distribution strategy in place, so we are confident that the film will be widely seen.

With such investment already in place, our challenge is to ensure that production values are of the very highest standards to ensure that the final film can stand qualitatively alongside top quality film work from any genre.