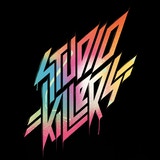 AMAZING! THIS IS GONNA BE HUGE! We reached our goal in under 48 hours!!! Our new goal is to double the fun! By doubling the length of the pilot from our planned 11 minutes to a robust 22 minutes! So we can really get into the story! As a new reward we’re also offering the story of Episode 2 as an additional comic book! 😃

AND SHOULD WE SURPASS THAT and reach 300,000£ we’ll make 3 X 11 min episode MINI SERIES! 💥Having a brand new song for each episode!💥 Spread the word far and wide if you want EVEN more Studio Killers content!

Studio Killers is an internet phenomenon of vibrant animation and music amassing over a 120M views on YouTube! This secretive audio visual group is comprised of 4 individuals (1 visual artist and 3 musicians). But to the general public they are known as the virtual characters that represent them: femme boss and front woman Cherry, keytarist Goldie Foxx and DJ Dyna Mink.

Not attached to any major label or conglomerate to date, Studio Killers is made through the hard work and dedication of the 4 people behind the band. The crew all have side gigs to make ends meet. The main visual artist creates the majority of all the visual work by herself, scaling up with a small crew for music videos and bigger events like this Kickstarter! Studio Killers has been a passion project fuelled by love, family, friends and fans.

This animated Studio Killers 404 pilot/special will be a parody on the classic magical girl trope. Kind of a crossbreed between Sailor Moon and Rick and Morty. It will feature a brand new song and a full soundtrack!

Cherry and the Studio Killers’ big dream is to create an animated series to push this project to the next level and to deliver the kind of amazing jaw dropping content they’re known for, but with much healthier business structure! Getting an animated series signed with a Network or VOD would drive all our other content, ensuring the project’s future! There has been a lot of interest from partners and networks, but ultimately development, pitching, and negotiations often take several years with the additional added 1.5-3 years of production before the fans get to see anything at all, if ever. We’d really prefer not to keep you in the dark THAT long.

With this Kickstarter we can share with you the process and the journey of creating an amazing animated special that doubles as a pilot for the series! With you the backers getting to see it as soon as it’s done regardless of future deals in the making. While at the same time being able to create some amazing rewards for you to get your hands on!

You can help by backing this campaign which you will be rewarded for with amazing swag! If you can’t back this Kickstarter for whatever reason, you can still help by sharing this project with friends and family far and wide. Share it with anyone you think would love seeing a crazy action comedy magical girl concept with stunning art and great music!

The Writers for the Pilot

For the special Cherry will be working with Alison Norrington of storycentral.com, a storyteller who has worked across theme parks, film, television, crowdfunding and gaming. She will make sure that the Studio Killers 404 special and series concept is as uncompromising and fearless as Cherry herself.

The Writers for the series

For the series we’re putting together a kick-ass team of diverse and inclusive talent handpicked throughout the industry to represent all the values that Studio Killers is founded on while being the kind of funny crazy super nerds with the experience of pulling off a hit series. We aim to walk the walk.

Cherry (the visual artist) has a long history of running and building productions. With her knowledge, skills and contacts she has the tools to build an ace team to produce the special. We believe in creator driven properties and that is what this will be, with the reigns securely in the hands of the creator herself. We have many ties to production companies and talent, so we’re ready to scale as needed!

Majority of the money will be used for animation production. In fact our current goal is quite tight! So we plan to put in lots of our own resources and time to make this happen. Which is how we Studio Killers get things done.

Each time we hit a new goal, because of your awesome contributions, we’ll share our new crowdfunding  goal with you here! This will unlock all new amazing rewards, while we celebrate the occasion on our social media with art and more! So remember to follow us! YOUTUBE, INSTAGRAM, FACEBOOK, TUMBLR!

Animation takes a long time to produce, and this goal will get us most of the way for the pilot but we will still need to put in our own time and money to complete the project. With our current goal we aim to have the pilot done by the end of summer 2020. Some time will also go to the development process, which we call ‘baking’ the project. Once we get into the series, episodes take less time to produce.

Delivery of most rewards is set for august 2020. In the case of signed items, the reward delivery is set for December 2020. We need this time to make sure all the products meet our standards of quality and to create the pilot which is part of every reward tier!

Even if we make and deliver the pilot, there is no guarantee that we will land a deal for an animated series. This unfortunately is just a fact. We will be going to every network, event, and person we know in the industry and putting it down before them in the hopes of getting this baby off the ground! Should for some reason, luck not be in our favor, we will let everyone know what our next steps will be.

Whatever happens you will definitely see what we ever have made with the money, even if that should be an unfinished pilot!

Thank you for your support and understanding!