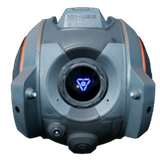 Today, our scientists are inventing Artificial Intelligence and Lethal Autonomous Weapons (LAWS) simultaneously. This game is about our future if we continue to allow these technologies to be developed and combined together.

Set in the future, you play a colonist seeking a peaceful planet for your new home. Your mission is to find a safe place on the planet for your family to join you in 9 days.

The planet has had terra-forming robots working for decades in preparation for human colonization. But the AI humanity invented has become an enemy and discovered this planet. Are the robots on the planet waiting for you hostile?

You have 9 days to find a safe place on the planet. At the beginning of the day, the ship will drop you off on the planet and then orbit above you where it is safe. You have to setup a miner to collect fuel for the ship but hostile robots will advance towards you.

You have Sentry Weapons that you setup around you to provide you protection while the miner is collecting fuel. Once enough fuel is collected, your ship will descend to pick you up and you continue your journey looking for a safer place on the planet.

Artificial Intelligence is making news headlines every day and there is a global tech race to lead its innovation, but are we carefully considering the dangers of what we’re inventing? LAWS can independently search and engage targets based on their programming. Giving drones and robots life and death decision making authority is being developed without adequate protections and policies in place.

In the game, the enemy robots continually adapt to your defensive strategies and you have to also adapt to survive. The enemy AI learns, shows creativity, improves their technology and changes their strategy. To be able to survive, you must always stay one step ahead.

How Am I Going To Use The Funds

I need funding for three reasons.

2) Promotion – For a video game to be successful, it requires promotional efforts, marketing & advertising. There are many indie game developers who built great games but were commercial failures. They just didn’t sell many copies because they had little exposure and the marketplace is very crowded. Steam has a difficult challenge of giving exposure to the good games and a developer can’t just rely on Steam to promote their game and have good sales. Large studios budget 50% on development and 50% on promotional efforts and they really know what they’re doing. A big game might have a budget of $50m for development and will spend another $50m on advertising. They devote so much of their budget to advertising because it’s necessary to be a commercial success. I want to keep making better and better games but that requires the games to sell enough copies to fund future games.

3) Beta Testing – To make this game as good as possible, I need your feedback on the current state of the game. How can I make the game better? Working inside the game for so long, it’s easy to lose sight of the big picture. I need to understand how intuitive the gameplay is for someone who has never seen the game before. I need help with bug hunting, game play and difficulty tweaking, I want to hear your ideas and suggestions. I want to hear everyone’s opinion. My plan is to allow everyone to join the Discord server and give the backers who choose the Beta Tester Reward a special role on Discord and be able to devote more time to their suggestions.

I’m a new solo indie developer looking to create my vision of a video game I always wanted to play but couldn’t find. Gaming has always been a favorite past time but I’m now trying to make it a new career. I’ve spent almost a year working on this game, funding everything myself but now I need your help.

Thank you for considering funding me!