Dr. Ifeanyi Nsofor is a medical doctor, the CEO of EpiAFRIC, Director of Policy and Advocacy for Nigeria Health Watch 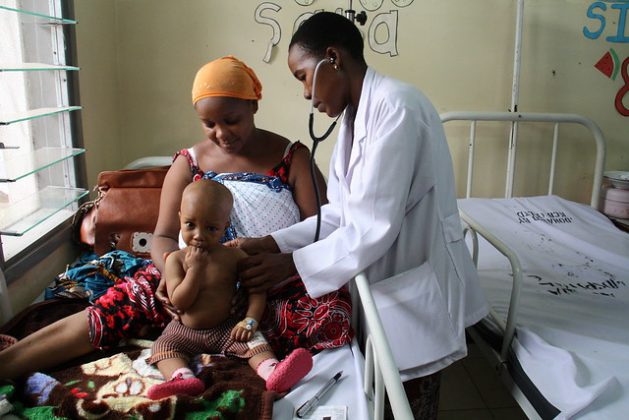 An eight-month-old boy is examined by a doctor in Dar es Salaam, Tanzania. Credit: Kristin Palitza/IPS

ABUJA, Nov 7 2019 (IPS) – Free movement of people and goods across Africa increases the risk of transmission of infectious diseases. The continent must realise that it is no longer a question of if disease outbreaks will occur, but instead, of when, and how fast.

The U.S. Centres for Disease Control says that within 36 hours, a disease outbreak can spread from a remote village to major urban cities of the world.

According to preventepidemics.org, a website which ranks countries’ levels of epidemic preparedness, no country in Africa is ready for the next epidemic. The African Union must act now to increase the capacity of member countries to detect, respond and manage disease outbreaks. Managing disease outbreaks is not cheap but it is cost-effective.

The current Ebola and measles outbreaks in DRC have killed 2185 and more than 3,000 respectively. In Nigeria, recent weekly epidemiological reports by the Nigeria Centre for Disease Control show there are suspected cases of Lassa fever, cerebrospinal meningitis and yellow fever. In Zimbabwe, there is fear of another cholera outbreak. The 2018 cholera outbreak killed 26 people.

In this context, the recent increment in the capital base of the African Development Bank by $125 billion to $208 billion, should be commended as it could support improved health security across the continent.

It is also timely with the Africa Continental Free Trade Area (AfCFTA) agreement going into effect this year as AfCFTA requires a coordinated effort to put a stop to the frequent outbreaks of infectious diseases on the continent. Funds from the Bank can help.

Specifically, with its increased capital base, these are four ways the African Development Bank can support a more secure Africa.

First, provide grants to the Africa Centre for Disease Control and national public health institutes to increase laboratory diagnostic capacities. The first step to detecting any outbreak is knowing the cause as fast as possible, but laboratory equipment is expensive.

So, the Bank should give grants to national public health institutes to procure diagnostic equipment and upgrade laboratories. A way to achieve this is to partner with laboratory equipment manufacturers to reduce cost and work out favorable payment plans.

For instance, during the 2014-2015 Ebola outbreak across West Africa, an Ebola screening machine, which reduced specimen turn-around times in Sierra Leone, was brought from Nigeria. However, it was donated by the European Union. Africa must begin to take leadership in such areas, without depending on international donors for support.

Second, work in partnership with the African Union to train the local health workforce and increase local African capacity to prevent, detect, respond to and manage disease outbreaks.

The African Union’s deployment of more than 800 African volunteers to support the 2014-2015 Ebola intervention in Guinea, Liberia and Sierra Leone was instrumental in managing that outbreak and restoring health systems across the region.

I was a co-lead of the EpiAFRIC team which evaluated the African Union’s intervention. Traveling with my colleagues across the three countries and interviewing community members, volunteers, international partners and national ministries of health, it was apparent that it needed local expertise to stem the outbreak.

Third, improve infectious disease detection between borders. All African countries have ratified AfCFTA. When fully implemented, it would come with increased movement of Africans across borders.

The continent must be ready to prevent cross-border spread of infections. The ease with which Mr. Patrick Sawyer, the Liberian who brought Ebola from Liberia to Nigeria, threatened the health security of the continent, led to deaths of 8 health workers and Nigeria’s loss of $186 million in GDP.

To achieve this, the Bank should work with national public health institutes and ministries of health to ramp up epidemic preparedness at land, sea and air international borders.

Fourth, work with national governments and support their efforts for universal health coverage. Too many Africans pay out-of-pocket for healthcare.

This is not equitable and sustainable. According to the Director-General of the World Health Organization, universal health coverage and health security are two sides of the same coin.

Ultimately, there cannot be global health security if there are still poor underserved communities where people do not have access to healthcare or are unable to pay for the healthcare they need.

Needs are infinite and resources are limited. So, the African Development Bank should prioritize the health security of Africa, because a healthy continent would be more prosperous and then attractive to investors.