Global In-vitro Toxicology Testing Market is emerging with high CAGR of 7.11% through 2025 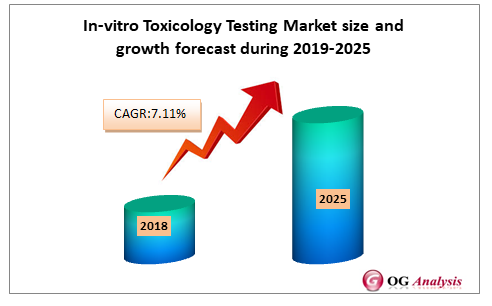 In-vitro toxicology testing is a nascent sector across the In- vitro diagnostic market and is set to enter growth phase with CAGR of 7.11% between 2019 and 2025. Increasing R&D investments to detect toxicity during drug development, integration of advanced technology approaches along with growing concerns to reduce animal testing are amidst factors driving in-vitro toxicology market growth and value.

In addition, growth in nonprofit laboratories with intense investments from regulatory testing consortium is set to shape the market size over the long term period. For instance, The PETA International Science Consortium Ltd. donated $50,000 in equipment to the Institute for In Vitro Sciences (IIVS). Accordingly, IIVS will use the VITROCELL, Cloud inhalation exposure system to assess the effects of substances on the human respiratory tract instead of animals.

Further, manufacturers of e-cigarettes and other next-generation tobacco products investing in non-animal tests are embracing in-vitro toxicology and are set to tweak potential in-vitro toxicology testing market opportunities in the medium to long term.

However, factors such as lack of skilled professionals, use of alternative methods, and incapability to detect immunostimulation and autoimmunity are restraining the in-vitro toxicology testing market growth.

Among the applications, systemic toxicology occupies major market share during the forecast period 2019 to 2025

Biotechnology companies relying on cell-based assays to conduct research activities are propelling market growth. Accordingly in 2018, SGS, a biopharmaceutical solutions provider announced the introduction of in vitro toxicology services to allow its clients to establish the toxicological profiles of bio/pharmaceuticals, medical devices, cosmetics and chemicals.

For example, in September 2019, microvessel-on-a-chip, an in vitro model toxicology testing model was jointly developed by Philip Morris International (PMI) and MIMETAS to measure the early onset of atherogenesis as well as to provide toxicological assessment of consumer products.

In response to strong demand for alternative testing methods, key market players are entering into agreements with CRO to expand in-vitro toxicology testing platforms. For example, in 2019, SenzaGEn signs agreement with MB research Labs to expand animal-free testing platforms in the U.S and promote in-vitro toxicology testing in combination with AI.

Further, Across Europe, personal care and cosmetic products manufacturers which have not complied with regulatory review of cruelty-free testing are being banned.  In-vitro International has pursued this pathway industriously with in vitro technology adopted at the GHS level and Ocular Irritection (OI) currently following in a similar manner.

Furthermore, as a result of increased support from regulatory, consumer and government areas for in vitro tests to replace animal testing, large consumer markets such as China, Brazil, India, and Colombia, as well as Taiwan and other smaller markets have legislation requiring in-vitro toxicology testing.