Gonorrhea Therapeutics Market Estimated to Touch ~US$ 970 Mn in Revenue in 2019, Notes Fact.MR

There has been a significant rise in the prevalence of gonorrhea that is resistant to components of dual antibiotic therapy – ceftriaxone and azithromycin, which is the only recommended treatment for gonorrhea. In addition, resistance to several other antibiotics apart from dual antibiotic therapy resulted in ‘super gonorrhea’, which has become a buzzword in the gonorrhea therapeutics market. With a slew of promising new antibiotics on the horizon, alongside surveillance, education and preventative measures to stymie prevalence of super-resistant gonorrhea, prospects seem bullish for the gonorrhea therapeutics market.

“As gonorrhea, a sexually transmitted bacterium is increasingly learning to withstand the currently available antibiotics, the infection is making progress in its relentless march towards untreatable status. Growing partnerships between companies and organizations, to develop novel drugs that combat the drug-resistant gonorrhea, are highly likely to complement gains in the market,” says Fact.MR report.

The market of gonorrhea therapeutics is likely to grow in parallel with the potentially effective drugs that are currently in pipeline. Growing number of clinical trials and rising investments in healthcare industry will continue to pave lucrative avenues of growth for the gonorrhea therapeutics market. The study opines that dual therapy will remain the treatment of choice for gonorrhea, accounting for ~90% market shares. This falls in line with the current recommended regimen for gonorrhea treatment that includes a combination of two antibiotics, azithromycin, which is given orally, and ceftriaxone, an intra-muscular drug. 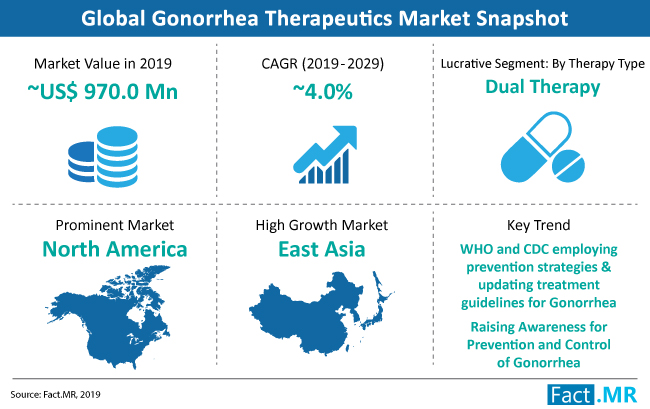 According to the Fact.MR study, lucrativeness of developed markets – North America and Europe – for gonorrhea therapeutics will endure, primarily underpinned by growing prevalence of STDs and rapidly advancing healthcare infrastructure in these regions. In the US alone, ~1 Mn cases of gonorrhea are reported annually, according to recent studies. Favorable reimbursement policies and government funding to numerous health organizations for the development of drug-resistant gonorrhea treatment will remain the key growth influencers of the market in these regions.

The study further opines that companies in gonorrhea therapeutics market are making bulk investments in building a robust pipeline, while focusing on drug approvals in different regions. However, the overall reluctance of gonorrhea drug manufacturing in line with long regulatory processes and complications associated with eventual antibiotic resistance of drugs could team up against the steady growth of gonorrhea therapeutics market.

Request Methodology of this Report- https://www.factmr.com/connectus/sample?flag=RM&rep_id=3761

Fact.MR is a fast-growing market research firm that offers the most comprehensive suite of syndicated and customized market research reports. We believe transformative intelligence can educate and inspire businesses to make smarter decisions. We know the limitations of the one-size-fits-all approach; that’s why we publish multi-industry global, regional, and country-specific research reports.