IMPACT Leadership 21- Power of Collaboration is proud to present the 2016 Impact Honors, Celebrating the Courage to Drive Change Awards at The United Nations Headquarters, NYC

“The IMPACT Frederick Douglass award was created to recognize male champions whose efforts advocating for women’s parity make a difference worldwide. Frederick Douglass was an abolitionist and a staunch defender of women’s rights. His contribution and support paved the way for women around the globe, leaving a powerful mark on humankind. Ambassador Anwarul K. Chowdhury was the first recipient of the IMPACT Frederick Douglass award for his creation of United Nations Resolution 1325, that women should have equal participation in peace and security decision-making processes- the first of its kind. We award Vincent Molinari in this spirit.” ~ Constance J Peak 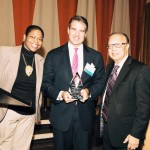 “In presenting Mr. Molinari with this award and recognizing his leadership as a male voice advocating and championing for women’s rights and equality globally, it is my hope that his leadership will spur the participation of other male leaders globally to engage in this most important initiative.” ~ Ambassador Chowdhury

“I am incredibly honored and humbled to receive the Frederick Douglass Award at the UN headquarters and especially so in receiving it from Ambassador Chowdhury, perhaps the world’s most prolific champion of women.  It is time that we create equal access for women so as to empower this vast and powerful brain trust to both accelerate and to develop sustainable economies. I would like to thank IMPACT Leadership 21 for the pioneering of Conversations with Men.”