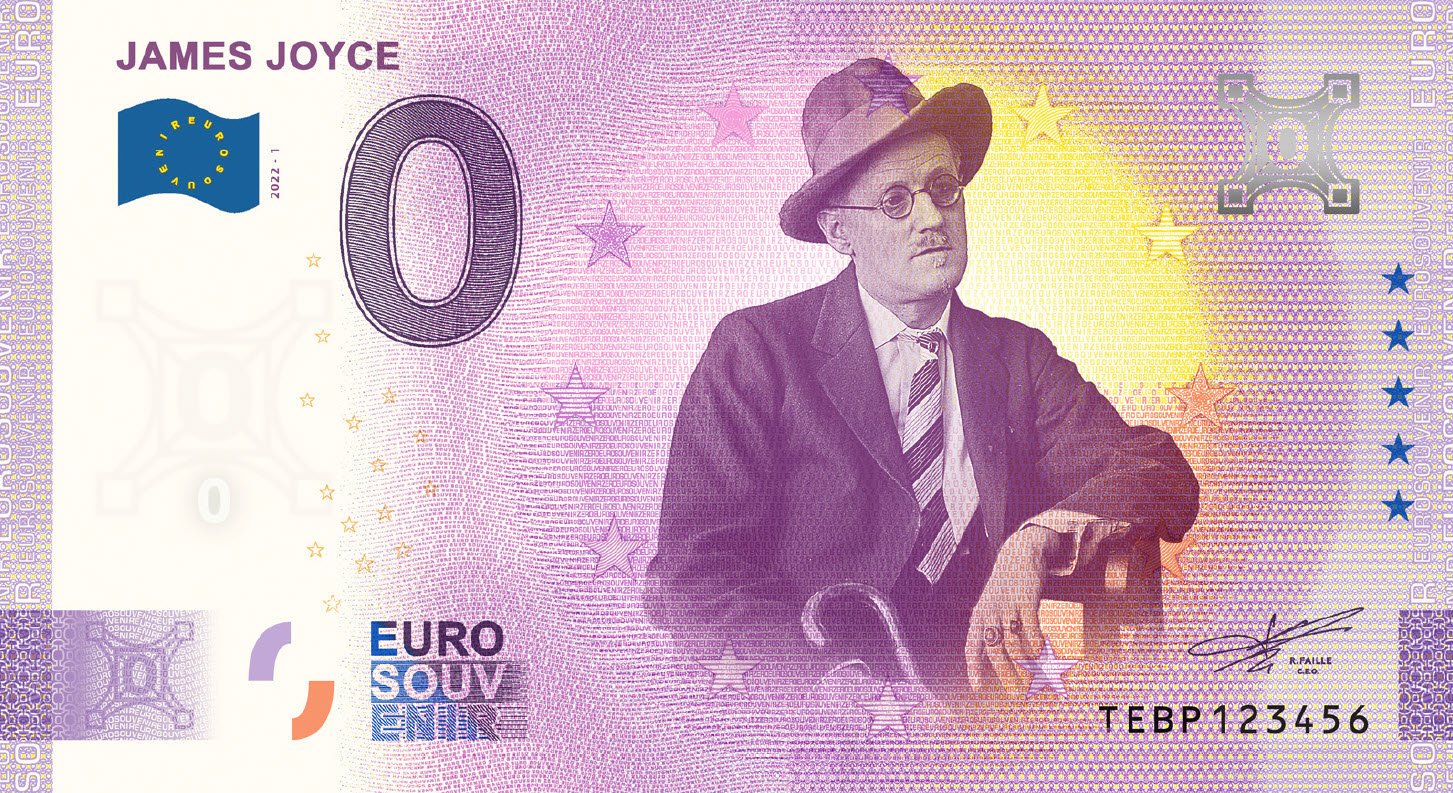 James Joyce, one of the most influential writers of the 20th century, was immortalised on a 0 Euro banknote to mark the 100th anniversary of his infamous book, Ulysses.

As a contributor to the modernist avant-garde movement, Joyce was also an Irish novelist, short story writer, poet and literary critic – which is why it comes as no surprise that he be selected as the next famous face to adorn a zero Euro banknote.

First published 100 years ago in 1922, Ulysses is a novel renowned for its intense character portrayal and wide breadth of humour, along with its use of a variant of the monologue known as the ‘stream-of-consciousness’ technique. It was banned upon its publication in 1922 in both the United States and Britain because of content deemed obscene, but the ban was lifted in 1936.

Today, 100 years on from its first publication, the book is rightly regarded as a masterpiece. Alongside a roll-call of other worldwide centennial celebrations this year, Euro Note Souvenir are delighted to have released a very special edition banknote, featuring James Joyce as the motif to mark this special anniversary.

Joyce is celebrated by many for his ambition, skill, and creativity, in addition to the jaw-dropping beauty of his work. By many, he is regarded as the greatest Irish writer of all time.

“When we choose a famous or influential figure to be honoured with a commemorative note, we take it very seriously,” says Peter Schneider, Founder of Euro Note Souvenir.

“The figures need to have had some kind of huge impact on people, or society. James Joyce certainly achieved both of these during his lifetime, and in fact continues do so beyond his passing through his writing and poems. He totally reinvented the wheel of novel writing, and broke every single rule, and yet still wrote a novel that is so touching and affirmative of life – even 100 years on.”

“2022 marks the 100th anniversary of his best and very famous book, Ulysses, and so now is the perfect time to mark the impact he had on Ireland and internationally, with a special edition zero Euro banknote.”

The company has previously honoured other iconic Irish influences, including Bobby Sands, revolutionary Irish politician Michael Collins, and John F Kennedy. Each 0 Euro banknote has a unique serial number, and the quality and features of a real currency banknote. The 0 Euro banknotes are approved by the ECB, but they are no legal tender and you cannot buy anything for 0 Euro. 0 Euro banknotes aren’t just for collectors – they are a piece of art, a wonderful collectible, keepsake and souvenir and a great gift for absolutely anybody who loves Ireland.

Only 5000 of these notes were printed. Peter Schneider is available for inquiries regarding the James Joyce commemorative Euro note, or to speak about the unique process of making commemorative zero Euro notes. To get in touch, contact Euro Note Souvenir at info@euronotesouvenir.com.