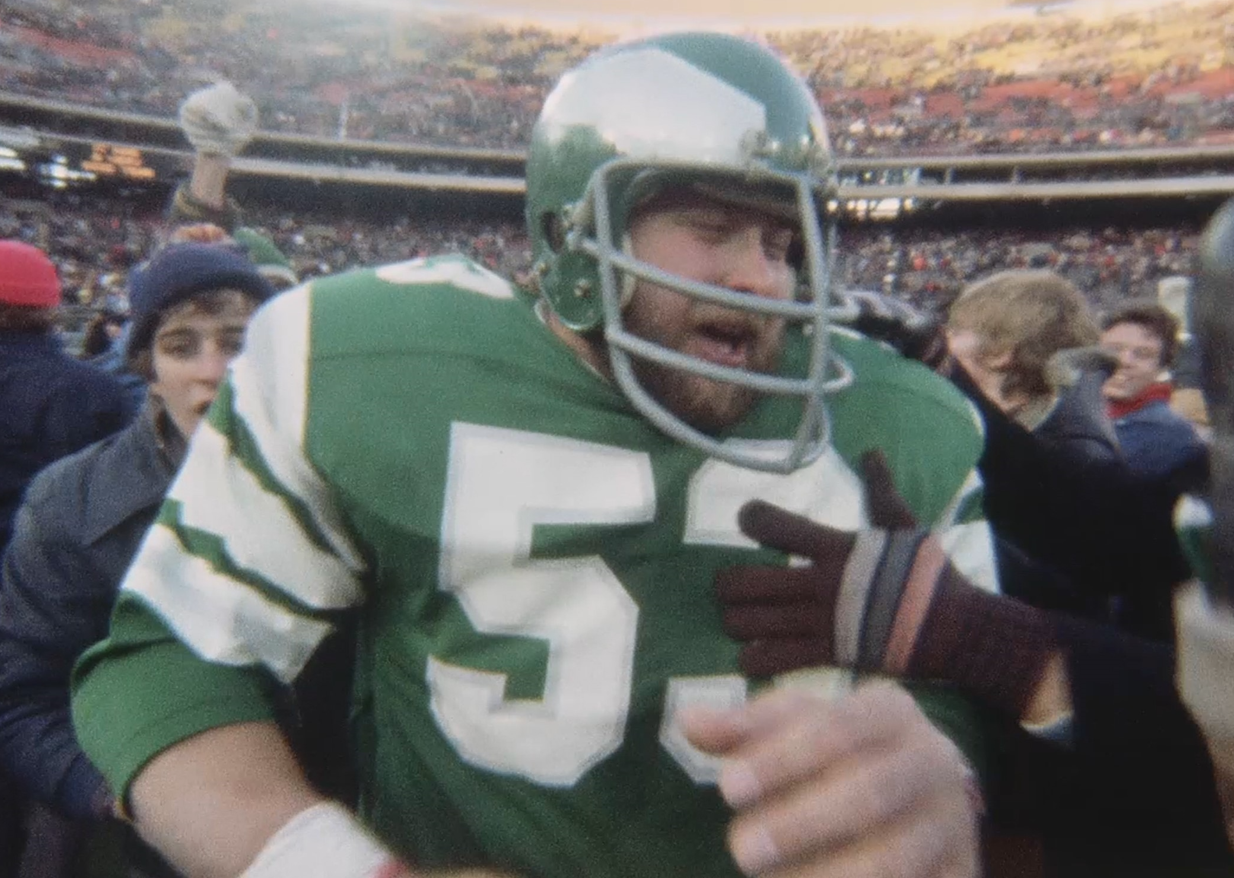 Dennis “Diesel” Franks shown here during the late 1970s as Philadelphia Eagles No. 53. 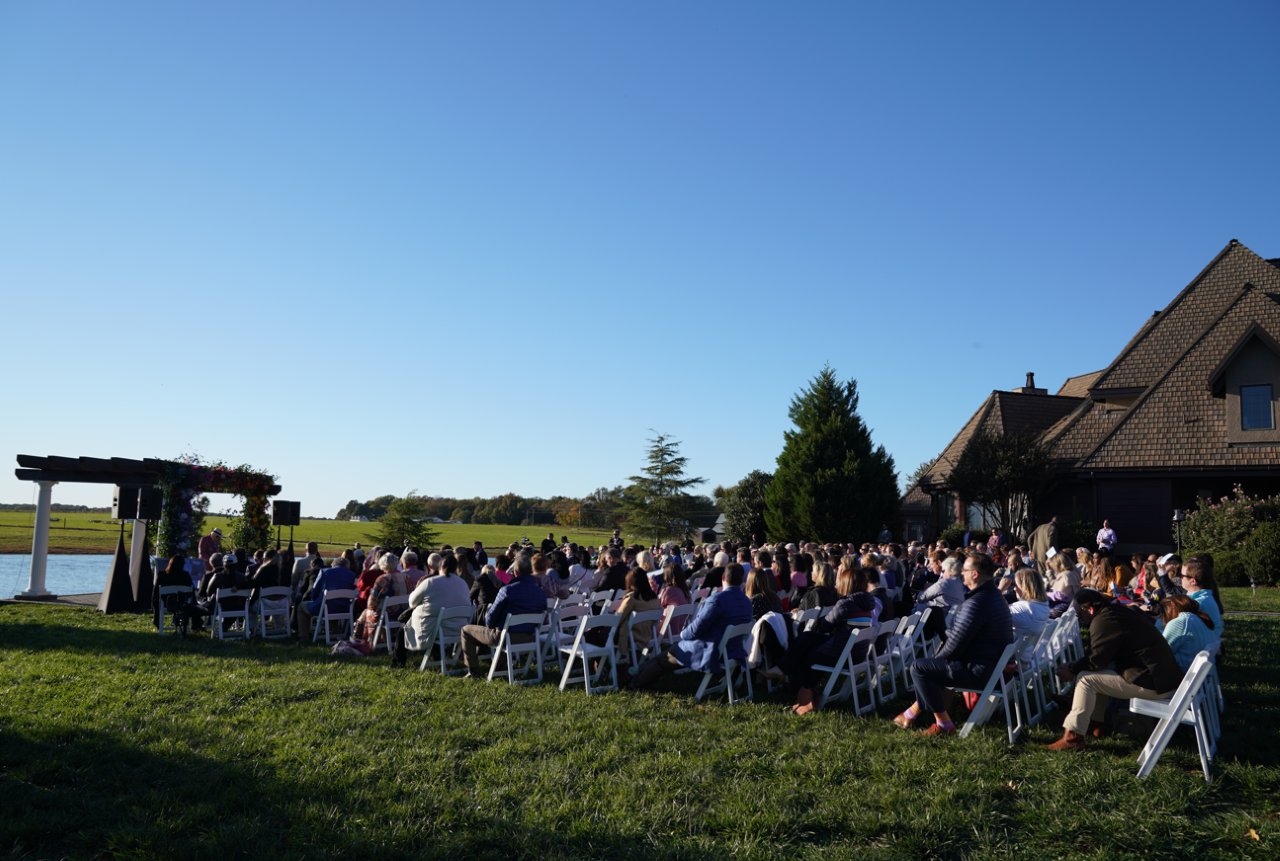 At the same time, tens of thousands of men and women around the world, who were inspired and mentored by Franks, took part in the celebration virtually through a Facebook livestream. Upon arrival, attendees were treated to blue skies and sunshine while they were guided up a walkway lined with a multitude of 50–inch by 40–inch framed photos of Dennis from throughout the years – as a loving husband and father, a business leader and a doting grandfather. Attentions were drawn to a football in a clear display case in front of a cascading fountain. Just below, an arranged assortment of hydrangeas, roses and daisies in shades of periwinkle, red, magenta, peach and yellow showcased the number 53 in honor of Franks’ Philadelphia Eagles jersey number. 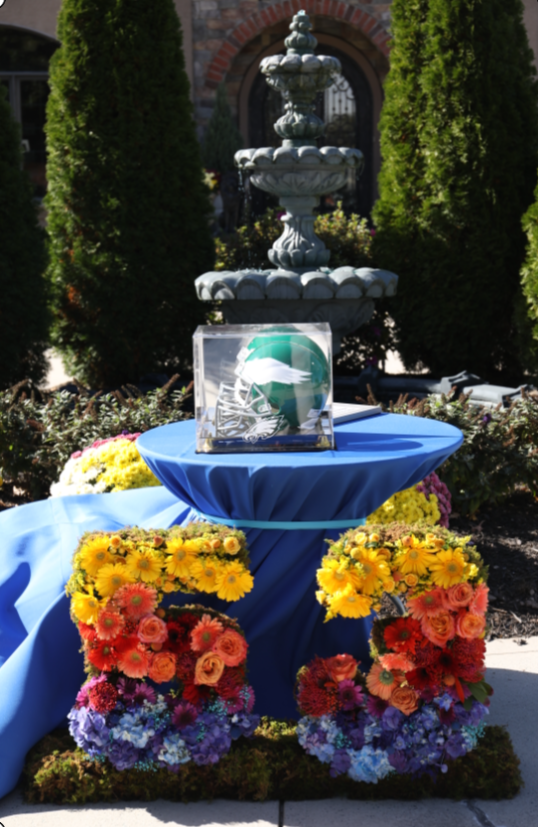 Two clear messages from the Franks family were shared with all who would attend. First, the traditional black dress code would be replaced with bold, bright colors. Second, the entire event would be what Dennis Franks told his family he wanted following his passing – a true celebration of life, for friends and family to gather, laugh, dance and sing, even if the words were forgotten.

Several people close to Franks spoke, including the Founder, Chairman & CEO of Market America Worldwide | SHOP.COM, JR Ridinger, who considered Franks an instrumental part of his company’s success. Ridinger shared that when he asked Franks to join a then start-up business, Franks and his wife Nancy moved to North Carolina without hesitation to help build Market America into the billion-dollar global company it is today. “Dennis always gave more than he took. Market America is a world-renowned company, and it’s solid because it’s retail driven. I have to give Dennis Franks 100 percent credit for that. He made us exponentially better,” said Ridinger.

Franks’ older brother Donald spoke as well. Among the many special anecdotes that he shared about his younger brother was the time Dennis accompanied him to the University of Michigan as he was applying to enroll there. Part of the admissions process was to discuss SAT scores. While Donald’s math scores were impressive, the counselor had noted that his low English SAT scores were concerning. That is when Dennis chimed in from the back of the office and said, “Well, we never was good at English.”

Kevin Buckman, Executive Vice President of Asia Pacific for Market America Worldwide | SHOP.COM, shared a very personal moment he had with Franks over a bottle of Scotch, which Buckman said was “nasty.” He told Franks that he had always wanted to have a big brother when he was growing up. Moving around in a military family, Buckman had seen other boys with older brothers in the neighborhoods in which he lived. He knew that if he had a big brother, he would always have someone who would have to move with him and his family. Without delay, Franks told Buckman, “Hey, I want to be that guy.”

Former Philadelphia Eagles player and current motivational speaker Vince Papale said that when his life became the story for a major motion picture, “Invincible,” which centered on his years with the Philadelphia Eagles, he acknowledged that none of what he achieved would have been possible without Franks. This was one of many reasons why Franks was named the godfather to all of his children.

NFL Hall of Fame Inductee and former Philadelphia Eagles Coach Dick Vermeil shared that he first saw Franks on film as he looked at the roster to see what he had to work with as the new head coach. One of his first questions to the general manager, Jim Murray, was, “Who’s this guy?” Murray told him Franks was going to the Oakland Raiders. Vermeil said, “Get him back. Get him back here!” Vermeil added that he will be inducted into the NFL Hall of Fame in August 2022 because of players like Franks, who helped build the foundation of success necessary to achieve excellence. 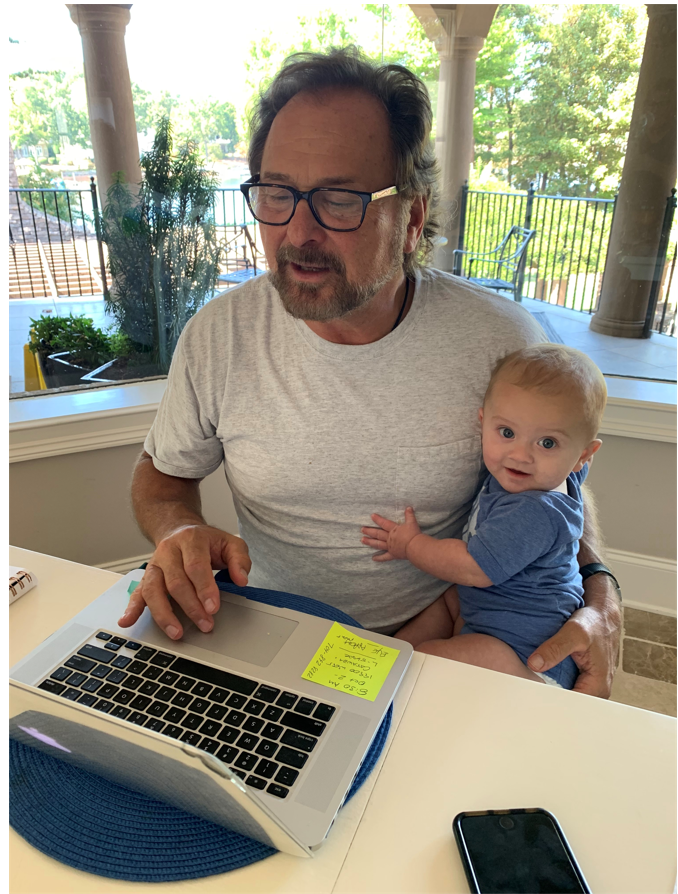 Dennis Franks’ daughter, Katie Franks Rowland, shared how great and normal of a life her father lived, including sitting in his same chair every night and waiting for the family to go to bed so he could turn on what Rowland considered “the worst TV movies out there – one-star ratings every time and with subtitles.” Rowland said her father would spend hours putting together Ikea furniture during his daughters’ college years, although he absolutely hated doing it. And as an adult, when she and Franks’ grandson William were headed out the door, Franks would always be sure to tell them to “go make a difference!”

Dennis Franks’ daughter, Lauren Franks Ifft, shared her words of thanks for everyone who joined the celebration because this was what her father truly wanted. 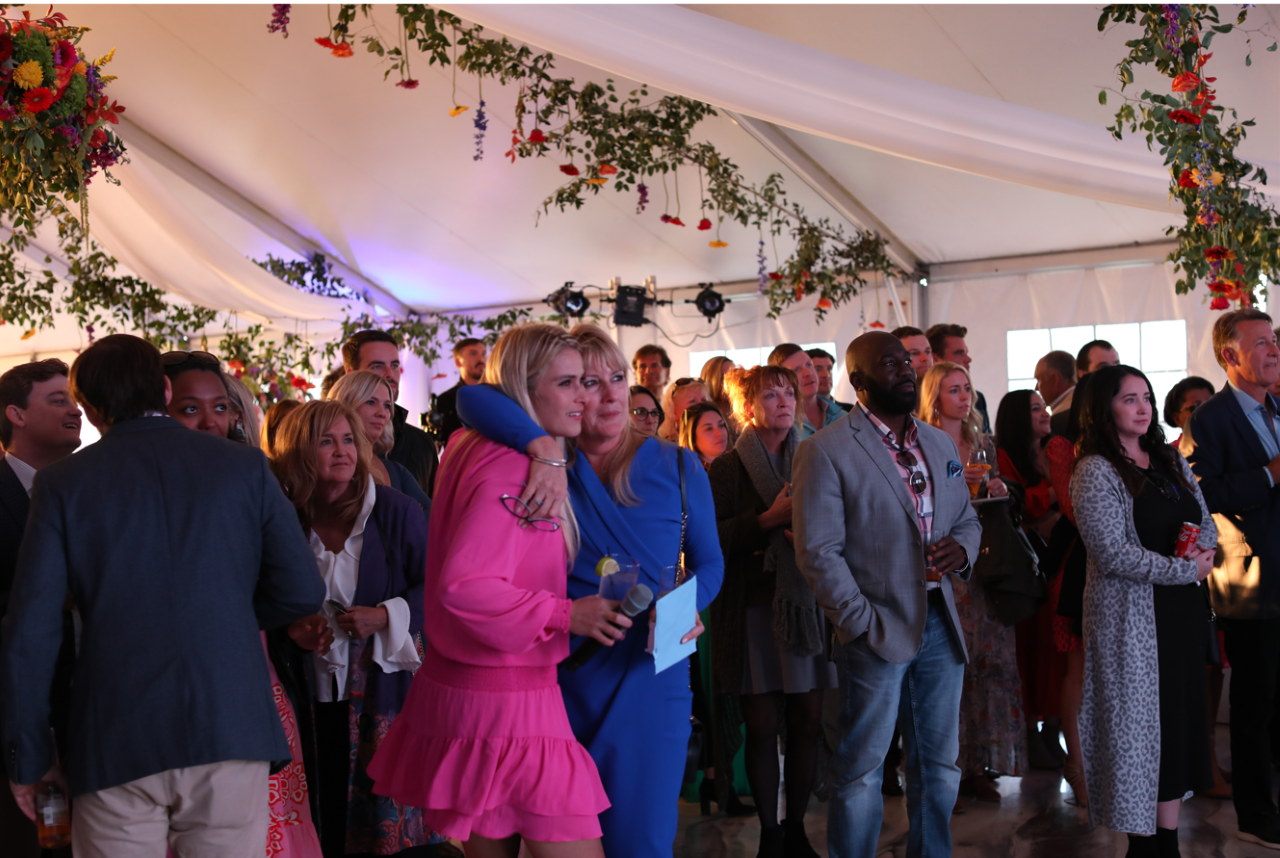 “He would joke with us that when he passed away, he wanted the biggest party. He wanted people to drink Scotch and dance and laugh and sing, even if you don’t know the words – to be happy that he lived,” said Ifft. “He crammed 10 lifetimes of achievements into one life that was taken too soon.”

Following the speakers, the celebration continued as family and friends enjoyed special slide shows and music from Franks’ Honey James Band. Included on stage was a life-size cutout of Franks playing the bass. His image stood alongside the rest of the band, who played song after song of Franks’ favorite tunes from groups like Tom Petty and the Heartbreakers, The Rolling Stones and Michael Franti & Spearhead. The latter band has a song, “Good Day for a Good Day,” that Franks and his daughter Lauren were planning to learn to play on the guitar together. Those in attendance took to the dance floor, along with the Franks family, to dance, laugh and continue the celebration. 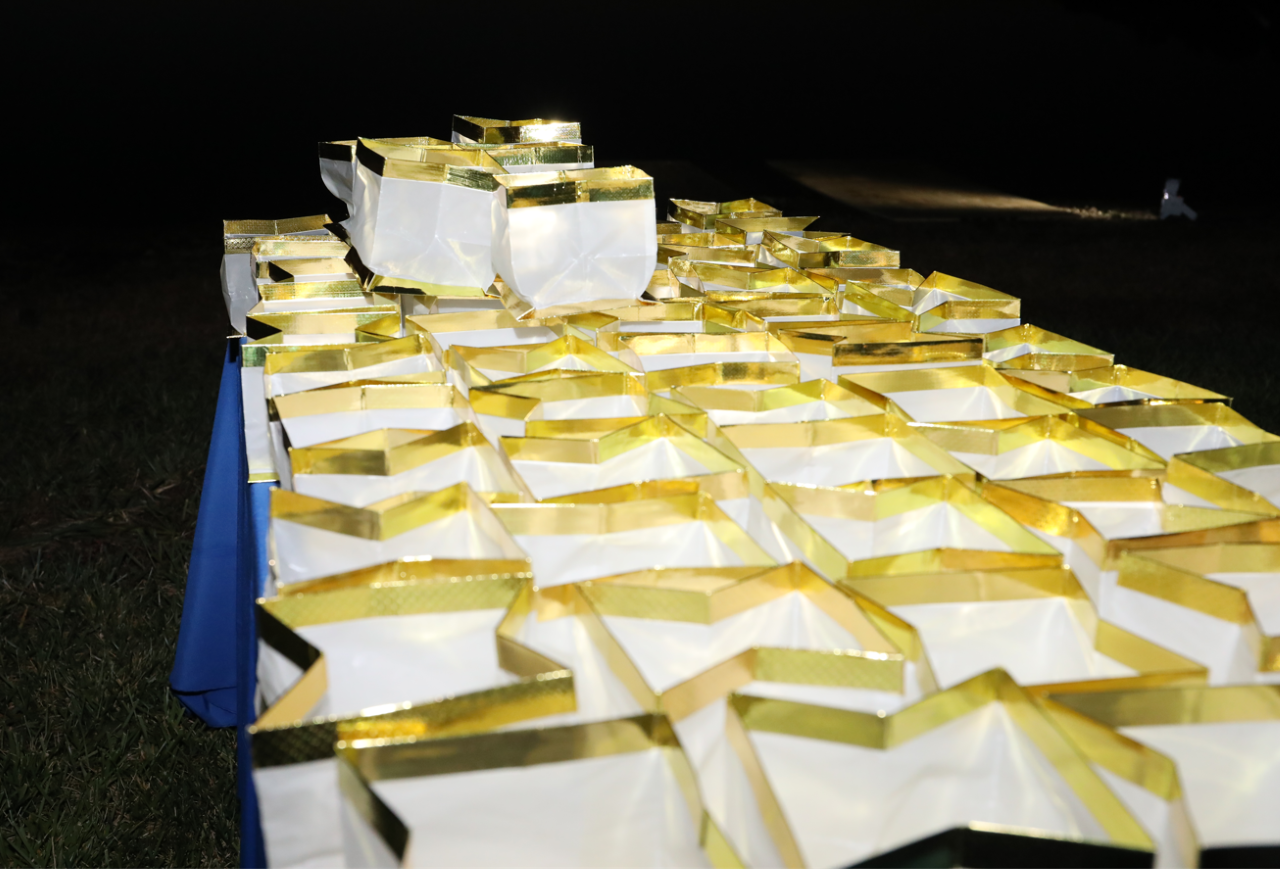 As the day faded into nighttime, upon a moonlit lake just behind the venue, a visually powerful and touching tribute of 53 lit lanterns were cast out upon the water, one at a time, as songs like “You’ll Be in My Heart” by Phil Collins played in the background.

Then, just as the last lantern moved out into the lake, a powerful and bold fireworks display filled the sky for all to enjoy. The University of Michigan fight song, “Hail to the Victors,” rang out, followed by the Philadelphia Eagles’ “Fly, Eagles Fly.” Family and friends sang and shouted along with the lyrics before other family-favorite songs continued to add to the extraordinary fireworks show. 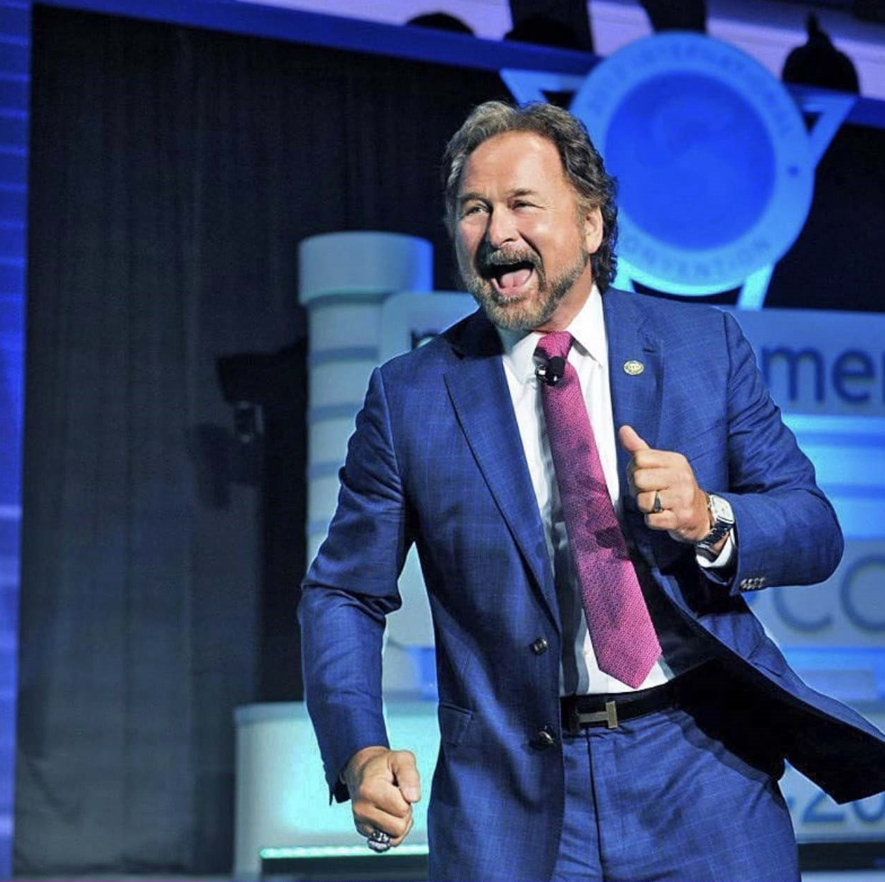 To share personal memories with Dennis Franks, submit to memoriesofdennisfranks@gmail.com

To stay in touch with the Dennis Franks legacy, follow his social media sites: