Callinex Mines Inc. is pleased to announce an Updated Mineral Resource Estimate at the Company’s 100% owned Point Leamington Deposit, Newfoundland (the “Project”).  This Project hosts a VMS deposit (the “Deposit”) with significant gold, copper and zinc mineralization that is open for expansion (Pt. Leamington Deposit 3D View).  The Deposit is located within a mineral lease and accessible by road and trails approximately 37km from the city of Grand-Falls Windsor and 20km from the clean hydroelectric provincial power grid (District Overview Map). The Mineral Resource Estimate was prepared by P&E Mining Consultants Inc. (“P&E”) for Callinex. 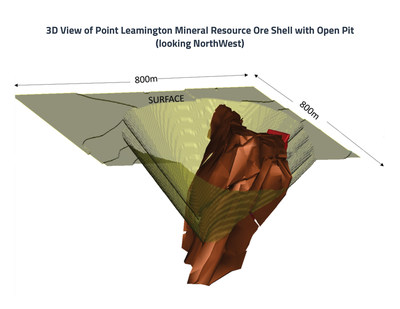 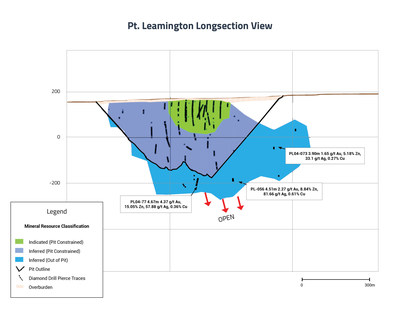 Max Porterfield, President & CEO of Callinex Mines stated, “The Point Leamington Mineral Resource Estimate with an Inferred Mineral Resource of over 1.1 million gold equivalent ounces coupled with an Indicated Mineral Resource of over 400 thousand gold equivalent ounces is significant in that we have now demonstrated a large, near surface deposit in the heart of Newfoundland. We plan to aggressively advance this project by completing additional metallurgical test work in tandem with exploration. This project fits in nicely with our attractive Canadian portfolio, as we continue to unlock substantial value for our shareholders.”

The Point Leamington Deposit style of mineralization, alteration, and host rocks suggests that it is a Kuroko-type VMS deposit hosted in Cambro-Ordovician age rocks, which are similar to the past producing Buchans and Duck Pond Mines in the area. The massive sulphides occur at a transitional period between altered felsic volcanics (dominantly flows, breccias, and pyroclastic) and a sedimentary / mafic volcanic sequence.  As a result of reviewing historical regional data, the Company believes that there is significant opportunity to discover additional deposits with further exploration efforts.

The Mineral Resource Estimate was generated using inverse distance cubed for gold and silver and inverse distance squared for zinc, copper and lead, for grade interpolation within a 3-D block model, constrained by mineralized zones defined by wireframes solid models.  The bulk density values used in the Mineral Resource Estimate were derived from a regression equation based on data measured from samples collected from Noranda drill core stored at the Newfoundland Department of Natural Resources Core Storage Facility in St. John’s, Newfoundland.

The database for the Mineral Resource Estimate consisted of 94 drill holes totaling 28,172 m, of which a total of 57 drill holes totaling 15,660 m intersected the mineralization wireframes used for the Mineral Resource Estimate.  The drill hole database contained assays for gold, zinc, copper, silver and lead as well as other metals of no economic importance.  In June 2020 and May 2021, P&E carried out data verification on the historical database with a 168 sample drill core selection program from the Department of Natural Resources drill core storage facility in St. John’s, Newfoundland.

The CDN$/t NSR values were calculated to determine the potentially economic portions of the pit constrained and out-of-pit constrained mineralization.  The calculations included:

The C$/t NSR values of blocks were determined with the following formula:

The pit-constrained Mineral Resource model was determined with a pit optimization, to ensure a reasonable assumption of potential economic extraction.  The following are the parameters utilized in pit optimization:

The Company also announces that it has engaged Capital Markets Advisory CA to increase awareness and the profile of the Company in the investment community, including introducing the Company to institutional investors. In consideration for these services, the Company has agreed to pay $6,000 per month and grant 25,000 stock options at a price of $[3.00] per share for a period of [five] years from the date of grant. The options will vest and become exercisable on a quarterly basis over a twelve month period. The term of the agreement is for a minimum of 6 months and may be terminated by either party with 30 days written notice. Capital Markets Advisory CA is controlled by Karen Mate.

The contents of this news release have been reviewed and approved by J.J. O’Donnell, P. Geo, Exploration Manager to the Company, and by Eugene Puritch, P.Eng, FEC, CET, President of P&E Mining Consultants, who is independent of the Company.  Messrs O’Donnell and Puritch are Qualified Persons as defined by NI 43-101. Mr. O’Donnell, P. Geo., is the Qualified Person for all technical information in this news release, excluding the 2021 Resource Estimate.

The Point Leamington Project, consisting of Mining Lease 136(2655), is located approximately 37km by road and trails from the City of Grand-Falls Windsor and approximately 20km from the provincial power grid. The Deposit is a large, felsic-hosted VMS deposit that dips 70 degrees to the west, has a strike length of 500m and a maximum thickness of 85m. Massive sulphides have been intercepted to a depth of 360m below surface from a total of approximately 21,714m of drilling in 72 drill holes. Regional government mapping and lithogeochemical sampling has indicated that Point Leamington’s host volcanic stratigraphy extends well beyond the vicinity of the Deposit.