Get ready to sing your heart out! Jazwares, a global leader in play, today announced the launch of its exclusive Do, Re & Mi product line. The toys are inspired by the Amazon Original animated series Do, Re & Mi, created by Michael Scharf and Jackie Tohn and produced by Amazon Studios and Gaumont. Geared towards preschool age children, the series centers on the musical adventures of three best birdie buddies voiced by Kristen Bell, Tohn, and Luke Youngblood. Based on the loveable characters from the show, the collectible plush toys are the first from the line to hit retail exclusively on Amazon, in conjunction with the series debut, with additional toys to follow on Amazon over the coming months. 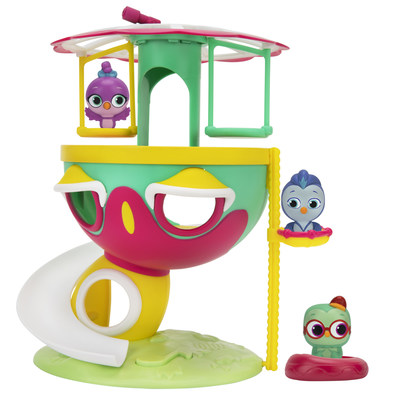 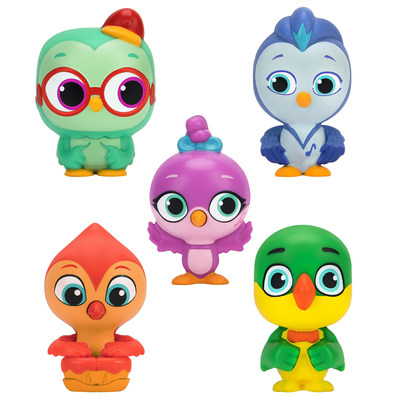 The delightful world of Do the owl, Re the hummingbird, and Mi the blue jay is brought to life through Jazwares’ Do, Re & Mi toy line, which encourages friendship, fun, and adventure, all while exploring the unifying power of music. Huggable plush, colorful figures, interactive playsets, and vibrant musical instruments will strike a chord with preschoolers everywhere.

“From the soft character plush to the interactive piano mat, not only are these exciting toys important for improving fine motor skills, and creativity, but they also cultivate a love and appreciation for music,” said Laura Zebersky, President of Jazwares. “We are excited to bring the musical adventures from the Do, Re & Mi series to life through our new preschool line.”

The new Do, Re & Mi product line includes:

Watch the new Amazon Original animated series Do, Re & Mi, available now on Prime Video in more than 240 countries and territories worldwide, as well as Amazon Kids+ in the U.S., Canada, UK, Germany, and Japan. Also launching in the world of Do, Re & Mi  is a book (The Mysterious Beat), a mobile game (coming later this fall), and a teacher and family guide—all of which are meant to help inspire a love and appreciation for music from an early age. For more information on the Do, Re & Mi toy line, please visit www.jazwares.com and to shop the collection visit amazon.com/shopdoremi.

About JazwaresJazwares, a subsidiary of Alleghany Capital Corporation, is a global leader in consumer products including toys, plush, action figures, collectibles, musical instruments, and recently expanding into the costumes and pets category. Jazwares’ portfolio includes a variety of dynamic, wholly-owned and licensed brands like preschool powerhouses Blippi, Cabbage Patch Kids®, CoComelon and Dino Ranch, unstoppable action and gaming brands like Fortnite, Halo®, Micro Machines, Nerf, Pokémon and Roblox, leading lifestyle and entertainment brands like All Elite Wrestling™ (AEW), BLACKPINK, Blinger®, Marvel and UFC®, musical property First Act™, and beloved plush Squishmallows®, Petooties™ Pets and Russ Berrie™, just to name a few. With over 20 years of design, development, and manufacturing expertise, Jazwares is an award-winning company with a progressive focus on identifying new trends and transforming them into high-quality products for consumers of all ages.

Jazwares, which is headquartered in Sunrise, FL, has offices around the world and sells in over 100 countries. Since its inception in 1997, Jazwares continues to grow through the development of new products and the strategic acquisitions of companies like First Act™, Russ Berrie™, Zag Toys™, Wicked Cool Toys™ and Kellytoy®. For more information about Jazwares, please visit www.jazwares.com.

About Do, Re & MiDo, Re & Mi is an Amazon Original animated series for preschoolers that centers on the musical adventures of three best birdie buddies voiced by Kristen Bell, Jackie Tohn, and Luke Youngblood. Featuring delightful adventures and toe-tapping original songs spanning multiple genres, the series takes little ones on a journey where they will discover new sounds and melodies, move to the beat, and see how music helps solve every problem!

Executive produced by Bell, Tohn, Michael Scharf, and Ivan Askwith, Do, Re & Mi is a production of Amazon Studios and Gaumont for Amazon Prime Video and Amazon Kids+.

About GaumontFormed in France in 1895, Gaumont is the first film company in the world, celebrating 125 years of history and innovation. With offices in Paris, Los Angeles, London, Köln and Berlin, Gaumont remains an industry leader, producing and distributing high-quality TV programming and films. Specializing in producing local stories with global appeal, Gaumont’s current slate includes talent-driven, diverse, and distinctive titles across multiple languages for the world’s leading global streaming platforms and channels:

For Netflix, the flagship series launching season 6 in 2021, Narcos, F is for Family 5th season and in production, High in the Clouds, the animated feature developed together with Paul McCartney, Samurai Rabbit: The Usagi Chronicles based on the comic books by Stan Sakai, Barbarians season 2, the period epic drama set in Germany, the global hit with 2 seasons currently available, Arsène Lupin, directed by Louis Leterrier and starring Omar Sy in France. For Amazon Prime Video U.S., Do Re & Mi with Kristen Bell, El Presidente co-created by Armando Bo and Pablo Larraín in Latin America, 2nd season and, the action thriller Totems in France. For Apple TV+ based on the Zen Shorts book series of Jon. J. Muth and winner of the prestigious Peabody award and a Daytime Emmy award, Stillwater. Gaumont co-produces and distributes around ten films a year in theaters. The film library encompasses over 1400 titles from prestigious directors such as Louis Malle, Jean-Luc Godard, and more recently, Toledano and Nakache for The Intouchables, the highest-grossing French-language movie to date with over $450 million in revenue to date. www.gaumonttelevision.com