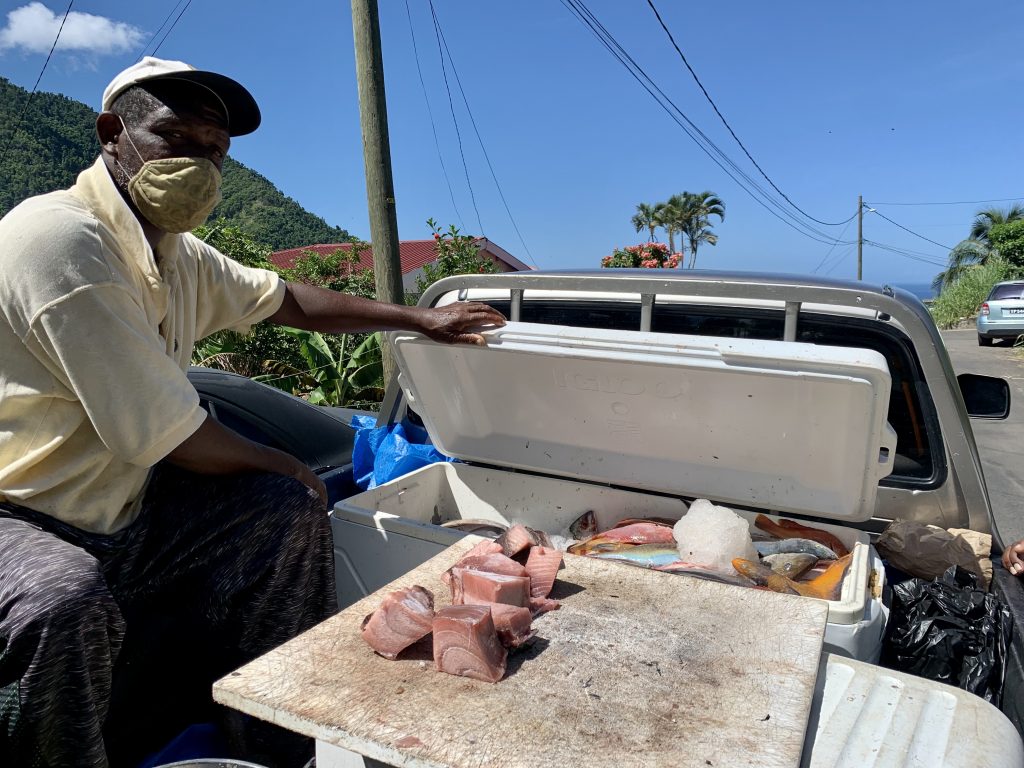 A fisherman displays his catch of the day in Dominica. Credit: Alison Kentish/IPS

DOMINICA, Sep 24 2021 (IPS) – On September 10th, on a sweltering summer afternoon, three fishers drove a van around the residential community of Castle Comfort in Dominica, blowing forcefully into their conch shells – the traditional call that there is fresh fish for sale in the area.

DOMINICA, Sep 24 2021 (IPS) – On September 10th, on a sweltering summer afternoon, three fishers drove a van around the residential community of Castle Comfort in Dominica, blowing forcefully into their conch shells – the traditional call that there is fresh fish for sale in the area.

One of the men, Andrew Joseph, urged a customer to double her purchase of Yellowfin Tuna, stating that at five Eastern Caribbean dollars a pound (US$1.85), she was getting the deal of the summer. (In the lean season, that price can double).

“It’s good fish, it’s fresh, it’s cheap,” he told IPS, adding that, “People eat too much meat. This is what is good for the body and the brain.”

Little did he know that he was echoing the words of a scientist who is rallying the world, and the landmark United Nations Food Systems Summit (UNFSS) to put greater emphasis on the financial, nutritional and traditional benefits of aquatic foods.

“Foods coming from marine sources, inland sources, food from water, they are superfood, but this is being ignored in the global debate and at the country level, because we have had a focus on land production systems and we have to change that,” Shakuntala Haraksingh Thilsted, Global Lead for Nutrition and Public Health at World Fish told IPS.

The nutrition scientist is also the Vice-Chair of Action Track 4, Advancing Equitable Livelihoods, at the UNFSS.

As the landmark summit hopes to deliver urgent change in the way the world thinks about, produces and consumes food, issues like the linkages between aquatic systems and health are emerging.

So are other linkages a scoping report by the Intergovernmental Science-Policy Platform on Biodiversity and Ecosystem Services (IPBES) says the world cannot ignore. The report, approved in June, paves the way for a 3-year assessment of the interlinkages among biodiversity, water, food and health.

In the case of the UNFSS, it shows how food systems transformation can be achieved if tackled as one part of this network.

“It will assess the state of knowledge, including indigenous and local knowledge, on past, present, and possible future trends in these interlinkages, with a focus on biodiversity and nature’s contributions to people,” IPBES Executive Secretary Dr Anne Larigauderie told IPS.

“The IPBES nexus assessment will contribute to the development of a strengthened knowledge base for policymakers for the simultaneous implementation of the post-2020 global biodiversity framework, under the Convention on Biological Diversity, and the Paris Agreement adopted under the United Nations Framework Convention on Climate Change and the 2030 Agenda for Sustainable Development.”

Landscape Ecology Professor Ralf Seppelt was one of the scoping experts for the nexus assessment. He says the science is clear on how food systems impact biodiversity and why agroecology must be a pillar of efforts to transform food systems.

“Micronutrients are lacking a lot. Micronutrients are provided by fruits and vegetables, which need pollination. So, the nexus is really strong between agroecological principles and the nutritional value of what we are producing,” he told IPS.

“Wherever we have to increase production, we should do it on agroecological principles. We should consider what farmers say and do, their needs, their access to production goods such as fertilizers and seeds, and it’s equally important to change our diets. It’s not just reducing harvest losses and food waste, but also about moving away from energy-rich, meat-based diets and feeding ourselves in an environmentally friendly way,” he said.

Professor Seppelt is also hoping that the voices of small farmers and indigenous communities are amplified in the global food transformation conversation. “IPBES made an enormous effort to work with indigenous peoples and local communities and include indigenous and local knowledge in its reports. We organized workshops, to collect a diversity of views about nature and its contributions to people, or ecosystem services to make the assessment as relevant as possible to a range of users,” he said.

For Thilsted, any plan to revamp food systems must come with a commitment to weed out inequality. She says from access to inputs and production to consumption and waste, inequality remains a problem.

“This unequal distribution of who wins, who loses, who does well, who does not do too well, who profits and who does not is putting a strain on food and nutrition and it is limiting our progress towards a sustainable development future,” she told IPS.

“COVID-19 has shown the fragility of the system and it is further displacing the vulnerable, for example, women and children who are being more exposed to food and nutrition insecurity.”

The IPBES nexus assessment hopes to better inform policymakers on these key issues.

It is not the first assessment of interlinkages. Earlier this year IPBES and the Intergovernmental Panel on Climate Change (IPCC) launched a landmark workshop report that focused on tackling the climate and biodiversity crises as one.

Now, the current nexus assessment on interlinkages among biodiversity, water, food and health will explore options for sustainable approaches to water, climate change, adaptation and mitigation, food and health systems.

IPBES Executive Secretary Dr Anne Larigauderie says it also shows that there is hope for restoring the balance of nature.

“I would like people to remember and know that they are a part of nature, that the solutions for our common future are in nature; that nature can be conserved and restored to allow us, human beings, to simultaneously meet all our development goals. We can do this if we work together, act more based on equity, social and environmental justice, reflect on our values systems, and on our visions of what a good life actually is.”