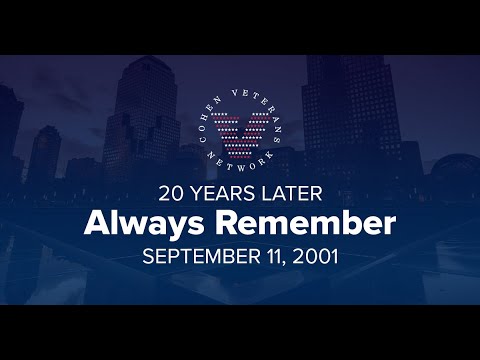 “Our hearts go out on this day to all those impacted by the senseless events of 9/11. That moment was the stimulus for many men and women to serve in the military and the attacks certainly altered the experiences of all of those already in service,” said CVN President & CEO Dr. Anthony Hassan, a 30-year veteran of the Army and Air Force in military behavioral health. “This anniversary will unquestionably stir up a wide array of feelings for those who have served our country, and their families. As always, our Cohen Clinics remain available to help those in need.”

To date, the 19 Steven A. Cohen Military Family Clinics have served more than 25,000 clients around the country.  The repercussions of 9/11 and the ensuing war are among the primary reasons that Cohen Veterans Network was launched in 2016, with a goal to fill the gaps that exist in mental health care for the veteran community, according to Hassan.

CVN Ambassador Kyle White, a veteran of the War in Afghanistan and a Medal of Honor recipient, has visited many of the Cohen Clinics. White, who enlisted in February 2006 and departed active duty in May 2011, says it is very important for the country to pause this year and honor the anniversary.

“September 11th really was the catalyst that drove me towards serving in the military. The years I spent in high school, I was watching the global war on terror,” White Says. “Considering the impact 9/11 had on our country and on our way of life, it was a personal driver for me to say ‘Hey, I want to go, meet this head on, and defend the constitution of the United States.’  As we reflect on 9/11, coupled with the end of the war on Afghanistan, it makes for a very challenging time.”

Hassan, White, and several other veterans and military family members from around the network share similar sentiments in a video, “September 11th: Always Remember” from Cohen Veterans Network.

CVN has also put together an online set of resources for veterans and military families dealing with recent news out of Afghanistan.

About Cohen Veterans Network
Cohen Veterans Network (CVN) is a 501(c)(3) national not-for-profit philanthropic organization for post-9/11 veterans, active duty service members and their families. CVN focuses on improving mental health outcomes, operating a network of outpatient mental health clinics in high-need communities, in which trained clinicians deliver holistic evidence-based care to treat mental health conditions. It was established in 2016 by philanthropist Steven A. Cohen with a commitment of $275 million to build the network. There are currently 19 Steven A. Cohen Military Family Clinics nationwide.