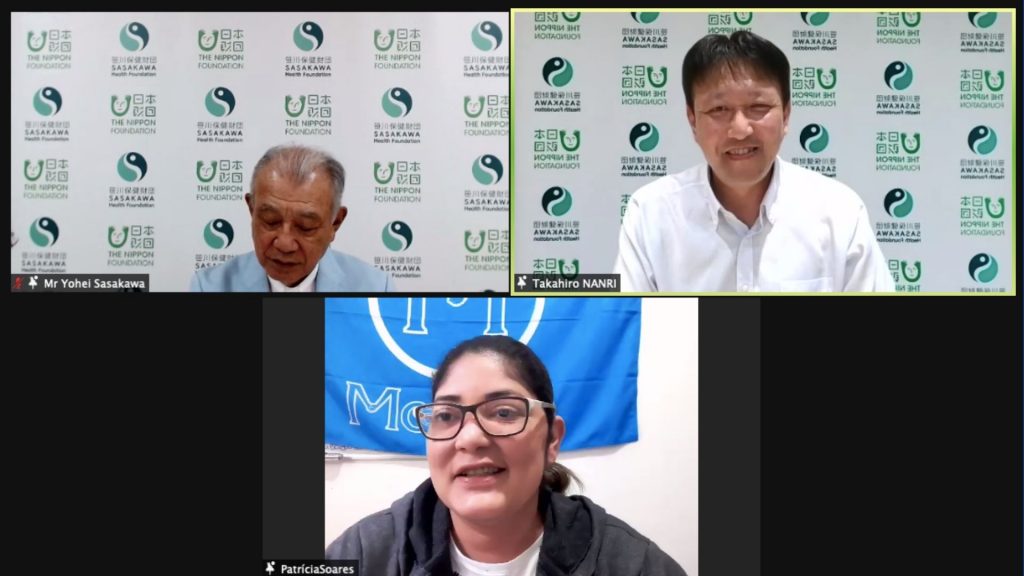 Yohei Sasakawa, WHO Goodwill Ambassador for Leprosy Elimination answers questions from Patricia Soares, a guest at the launch of the ‘Don’t Forget Leprosy’ campaign. They are with Takahiro Nanri, Executive Director of the Sasakawa Health Foundation. Credit: Cecilia Russell

JOHANNESBURG, SOUTH AFRICA, Aug 4 2021 (IPS) – A visit to a leprosy facility in Korea with his father, Ryoichi Sasakawa, spurred Yohei Sasakawa to dedicate his life to eliminating both the disease and discrimination of those affected.

He was speaking in an emotional pre-recorded address ahead of his 20th anniversary as WHO Goodwill Ambassador for Leprosy Elimination and at the launch of a 10-month ‘Don’t Forget Leprosy’ campaign by the Sasakawa Health Foundation Initiative.

Sasakawa said while he had achieved much in the 20 years, including getting the UN General Assembly to adopt the guidelines for eliminating discrimination of people affected by leprosy, also known as Hansen’s disease, the COVID-19 pandemic threatened the success of an international campaign to eradicate the disease.

In the past 18 months, while the world grappled with the pandemic, there was an estimated 30% to 50% decrease in detecting new leprosy cases. This could lead to increased transmission of the disease and more cases of disability, the webinar heard. In many communities, protocols, including lockdowns, had made it difficult to access treatment. This resulted in a loss of livelihoods and exacerbated discrimination that people affected by leprosy often face.

“Even amid the pandemic, it is very important that everyone involved in leprosy work continues what they are doing. We must not allow leprosy to be forgotten,” Sasakawa said.

“Let us be clear COVID-19 will be with us for some time. It is not enough to maintain minimal leprosy services. Rather such services must be restarted or expanded, with a focus on intensifying outreach activities to identify cases and begin treatment to all who need it,” Singh said.

However, as much as the pandemic was a threat, it had also allowed a focus on new technologies.

For many months now, “e-learning materials have helped community volunteers identify potential leprosy cases, and then refer them on to health workers,” Singh said. This was being extended to counselling and mental health support and should be harnessed in this campaign to fight both the disease and discrimination of those affected.

Sasakawa said in his 20 years as a goodwill ambassador, he had been on 200 trips to 100 countries. Here he spread the message of eliminating both disease and discrimination.

In his keynote address, he likened his campaign to a motorcycle with the front wheel symbolising the elimination of the disease and the back wheel eliminating discrimination.

“Both wheels must turn at the same time if we are to make progress toward a world without leprosy and its associated problems,” he told the webinar. This symbol is included in the campaign’s logo.

During an extensive question and answer session, Sasakawa said it was crucial that those affected return to work to support themselves. There were several initiatives, beyond just speaking to top politicians, that could be used.

These initiatives included reskilling but also included getting big businesses involved in the employment of people with disabilities. Sasakawa referred to the Valuable 500 project, launched in 2019 at World Economic Forum in Davos, Switzerland. This project, supported by the Nippon Foundation, called on the top 500 companies to promote the inclusion in business of people with disabilities.

Sasakawa said while he was a person who “believes the solution lies in the field”, the pandemic taught him it was now crucial to include new technology – webinars and social media – in the tool kit to end the disease and discrimination.

“Today, thanks to these technological tools, we are able to share the best practices that are happening in various countries and share with the world,” he said.

Leprosy is an infectious disease that mainly affects the skin and peripheral nerves. Around 200,000 cases are newly reported each year. Leprosy is curable with multidrug therapy but, left untreated, can result in permanent disability. An estimated 3 to 4 million people in the world today are thought to be living with some form of disability as a result of leprosy.

The campaign will feature a total of six webinars, online media briefings, TV and radio spots, social media messaging and videos featuring the Goodwill Ambassador. It will also incorporate other awareness-raising activities, including the annual Global Appeal to End Stigma and Discrimination against Persons Affected by Leprosy issued at the end of January.