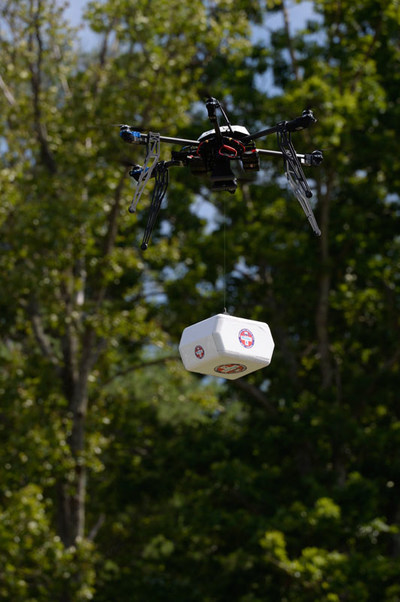 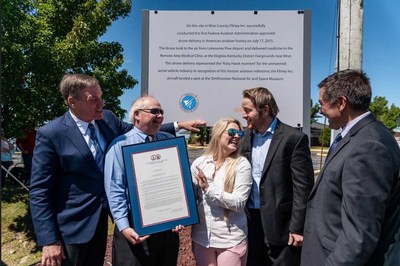 The Smithsonian Air & Space Magazine recorded of this historic milestone, “it had the FAA’s blessing to fly. And that made it the first official drone package delivery in this country.” The Flirtey delivery drone that made this first delivery will be going on display in the future ‘Thomas W. Haas We All Fly Gallery’ at the Smithsonian’s National Air and Space Museum. The museum also displays the Wright Brothers Wright Flyer that made the first official flight of a powered heavier-than-air flying machine.

A historical marker memorializing this milestone was authorized by the Virginia Department of Aviation and unveiled by U.S. Senator Mark Warner, D-Va. This historical marker reads, “On this site in Wise County, Flirtey Inc. successfully conducted the first Federal Aviation Administration-approved drone delivery in American aviation history on July 17, 2015. The drone took to the air from Lonesome Pine Airport and delivered medicine to the Remote Area Medical Clinic at the Virginia-Kentucky District Fairgrounds near Wise. This drone delivery represented the “Kitty Hawk moment” for the unmanned aerial vehicle industry. In recognition of this historic aviation milestone, the Flirtey Inc. aircraft landed a spot at the Smithsonian National Air and Space Museum.'”

Flirtey recently announced that it has completed the technology to certify its best-in-class drone delivery system for last-mile delivery. Flirtey’s advanced technology development was led by the head of NASA’s program to fly drones over people, and first unveiled at The National Press Club in Washington, D.C. Flirtey has more than 1,000 patent claims across a portfolio of granted and provisional patents. Flirtey is now expanding U.S. production of its technology and taking pre-orders for drone delivery systems.