Joining hands with Harper Adams University, XAG started launching into Europe and showcased its autonomous drones and robots at Cereals 2021, the UK’s largest arable farming event hosted on June 30 and July 1 in Lincolnshire. 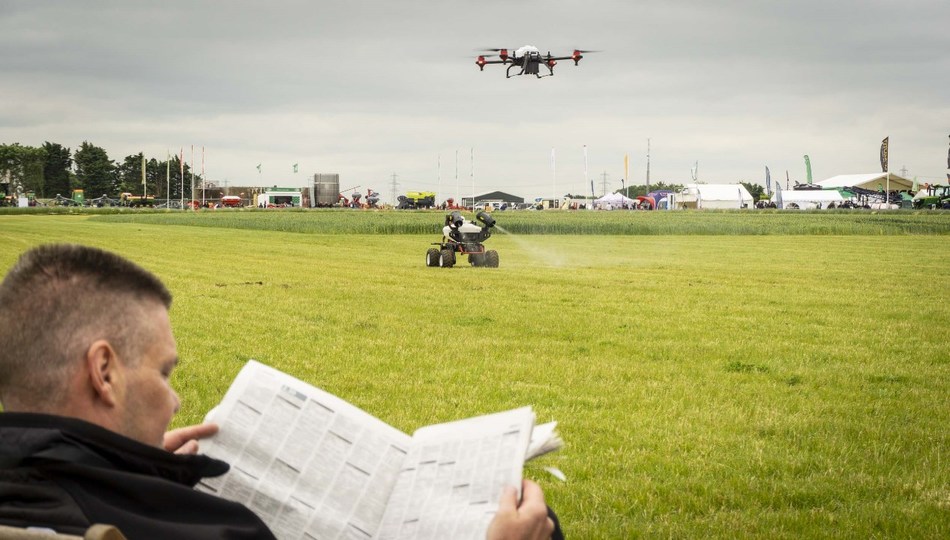 As its robots can take on farming tasks with precision, XAG is hoping to help farmers grow more with fewer chemical used and less manpower, while contributing to UK’s net zero farming goal by 2040. With many uses around the farmlands, these lightweight, electric-powered machines aim for a fundamental change of making the transition into low-carbon agriculture.

Crowds flooded to the Cereals Drone Zone, where XAG’s ground-air farming solutions were demonstrated and attracted a lot of attention from local farmers and agronomists. XAG P Series agricultural drone, fitted with the JetSeed spreading system, was able to spread seeds and fertilisers via a stable jet of air. As an electric four-wheel-drive system, the R150 Unmanned Ground Vehicle was spraying the plants on targeted plots with less wear on the soil.

The demonstration was led by Harper Adams University mechanical researcher Jonathon Gill, who has been working with XAG to promote the use of drones in the UK. After pre-programming parameters on the agri-app, his team deployed the drones and robots with a few simple clicks to conduct autonomous operations.

“Everybody can use a smartphone app to give a path plan and locate a particular task zone for your drones. That means the vehicle will stick to the exact path to centimetre accuracy following RTK positioning system, which allows us to do farm work very efficiently without physically getting our feet into the fields,” he said.

High tech solutions are also welcomed by the British government to rejuvenate many less developed rural communities. The UK agriculture sector is currently facing a labour shortage because of fewer EU workers coming due to the COVID-19 pandemic, as well as the end of EU free movement.

Justin Gong, Co-founder of XAG, explained in an interview with CGTN Europe that “drones and robots are not really taking the job of people who work in the rural area, but to complete those left-over jobs.” This technology can fix the growing gap between labour shortage and food demand, as well as attracting young people back to the countryside as tech-savvy professional farmers.

“XAG’s drone series can not only spray pesticides, but also come with other various functions such as seeding, fertilising, and remote sensing that finds out what is happening in the field for farmers to predict diseases, herbs, and fungus,” said Justin Gong.

Since 2018, XAG has been collaborating with Harper Adams University as strategic partners to introduce precision agriculture technologies to the UK market. Since XAG’s drones and robots are all powered by smart batteries and use fewer chemicals, they can help take the pressure off the environment to reduce carbon and cut down pesticide usage. According to Department for Business, Energy & Industrial Strategy (BEIS), agriculture accounts for 10% of the UK’s total greenhouse gas emissions.

As the UK pushes its ambitious net-zero emission action plan in agriculture, drones and ground robots are gradually seen for their potential to boost productivity and reduce carbon footprints. During his speech at the Cereals event, Environment Secretary George Eustice published updates on the Sustainable Farming Incentive, which is planned to be rolled out from spring 2022.

“Farmers will be able to earn up to £70 per hectare for actions to improve the health of their soil. Well-managed soil can lead to increased biodiversity, improve water quality and reduce carbon emissions.” This encourages UK farmers to adopt green agricultural practices and precision tools.

Since this March, the XAG R150 farm robots have been introduced into the UK and have been tested in a variety of orchards, ranging from apple trees, strawberries, to gooseberries and blackcurrant bushes. The UK has become the first European country to embrace autonomous robots for crop spraying. The Dearnsdale Fruit Farm and Grove Estate Vineyard in Stafford got their first anti-fungal sprays of the year by the R150. It is anticipated that high-quality fruit crops can be farmed without causing pollution of soil and water.

Autonomous drones and robots will be game changers in the future. They will play a key role in tackling climate change and bring a new step of change to farmers’ lives.