The Royal Mint has today unveiled the first official Alice’s Adventures in Wonderland coin collection inspired by the much-loved illustrations of the original book.

In collaboration with the Victoria and Albert Museum, the special £5 crown featuring Alice and the Cheshire Cat is available from today. The coin was revealed alongside the original illustrations by Sir John Tenniel at the Alice: Curiouser and Curiouser exhibition at the world’s leading museum of art, design and performance. 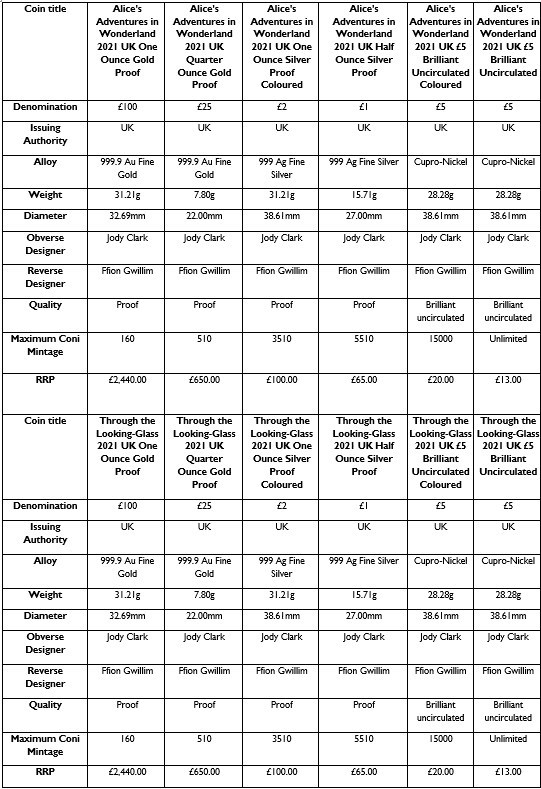 The Royal Mint has today unveiled the first official Alice’s Adventures in Wonderland coin collection inspired by the much-loved illustrations of the original book. In collaboration with the Victoria and Albert Museum, the special £5 crown featuring Alice and the Cheshire Cat is available from today. Photo credit should read: Casey Gutteridge.

Made by the Original Maker of UK coins, the £5 crown provides an ideal canvas immortalising the iconic illustrations in vivid detail and colour, using traditional minting techniques and innovative design technology. Featuring the edge inscription “Curiouser and Curiouser,” the intricate design is one of the most detailed coins produced by the 1,100-year-old Makers.

Launched in base metal (known as brilliant uncirculated), and also available in gold and silver, the Alice’s Adventures in Wonderland keepsake is part of a two-coin collectors’ range created by The Royal Mint Designer Ffion Gwillim and Sculptor Emma Noble. The second coin, featuring Tweedledum and Tweedledee, will launch later this summer in celebration of 150 years of Through the Looking-Glass – the sequel to the original Lewis Carroll book.

Much like the popularity of coin collecting, the treasured tales have passed the test of time – currently the second most searched children’s book in the UK on Google.

“Alice’s Adventures in Wonderland is a true classic, cherished by generations of adults and children of all ages and is still as popular today. In collaboration with the V&A, we have commemorated this treasured tale for the first time on an official UK coin.

“Inspired by Sir John Tenniel’s original illustrations, the beautiful £5 crown has been crafted to the finest quality, combining traditional minting skills with innovation in design technology. I’m sure the Alice’s Adventures in Wonderland range will become a popular choice for collectors, capturing the imagination of people of all ages, launching at the awe-inspiring Victoria and Albert Museum during the 150th anniversary of Through the Looking-Glass is a fitting celebration.”

“We’re delighted to be celebrating the global phenomenon beloved by all ages, Alice’s Adventures in Wonderland, with the 2021 commemorative coins. The designs masterfully capture the charm of Tenniel’s original illustrations and pay homage to some of the Wonderland and Through the Looking-Glass characters that Alice meets along the way. The 2021 coins are set to give fans the chance to add to their existing collections and inspire new readers of the book to discover the magic of Carroll’s stories and embark on wondrous journeys of their own.”

More information about the Alice’s Adventures in Wonderland commemorative coin collection is available at The Royal Mint website.

Please note that copyright protects these assets. They may only be used for editorial purposes and cannot be sold or used for other marketing purposes without the permission of The Royal Mint or the V&A.

About The Royal Mint

The Royal Mint has an unbroken history of minting British coinage dating back over 1,100 years. Based in the Tower of London for over 500 years, by 1812 The Royal Mint had moved out of the Tower to premises on London’s Tower Hill. In 1967 the building of a new Royal Mint began on its current site in South Wales, UK, to accommodate the minting of UK decimal coinage.

Today, The Royal Mint is the world’s largest export mint, supplying coins to the UK and overseas countries. The Royal Mint has also diversified into a number of other complementary businesses, building on the values that have been at the heart of the organisation throughout its history – authenticity, security, precious metals, craftsmanship and design:

Throughout history The Royal Mint’s name has been synonymous with precious metals and bullion. The organisation trades physical and digital precious metal worldwide and has a global network of distributor partners.

The Royal Mint entered the tourism business in 2016 when it opened its popular visitor centre, The Royal Mint Experience, at its home in Llantrisant, South Wales. The attraction welcomes around 100,000 visitors a year.

The Victoria and Albert Museum, London (V&A) is the world’s leading museum of art, design and performance with collections unrivalled in their scope and diversity, spanning 5000 years of human creativity. It was established in 1852 to make works of art available to all and to inspire British designers and manufacturers. Today, its purpose is to champion creative industry, inspire the next generation, and spark everyone’s imagination.