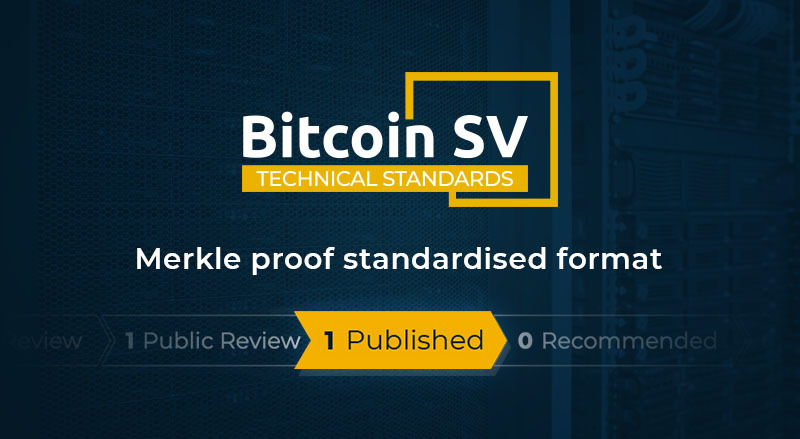 During the recently held CoinGeek Conference in Zurich, Switzerland, it has been announced that the BSV Technical Standards Committee (TSC) has completed the public review process for the Merkle proof standard and has published the standard under the OpenBSV license. The announcement is made during a presentation by Steve Shadders, leading provider of enterprise-grade blockchain solutions nChain CTO and TSC chairman, and Alex Fauvel, Two Hop Ventures founder and TSC founding member.

The Merkle proof standardized format is the first TSC standard to be published. The TSC is not solely responsible for determining standards as it has worked with developers and stakeholders within the BSV ecosystem in order to find and create common grounds; and ultimately, provide a framework that effectively enables interoperability across different platforms.

“The TSC is not here to decide what standards are. It is really here to help industry decide what those standards are themselves… The TSC only works in collaboration with the industry, with us playing the role of being the facilitators and the service providers and other people actually providing the input,” Shadders said.

So, what does this actually mean? The publication of the Merkle proof standard not only enables greater interoperability of BSV payments and other platforms, it also offers a more stable and dependable platform for developing simple payment verification (SPV) services on the BSV blockchain. It can be said that SPV is one of the components that makes BSV the original Bitcoin, allowing for the receipt and validation of payments without having to run a full Bitcoin node or download the entire blockchain as what is stated in the Bitcoin white paper.

“The fundamental element of SPV itself is the inclusion proof—the Merkle proof. If we didn’t have this standard, anyone who wanted to implement proper SPV in a wallet would have to make up a data structure and then the second person that came along would have to decide whether to adopt that data structure or to be incompatible, in which case you have two SPV wallets that have siloed ecosystems,” Shadders pointed out.

Standards are an integral part of all industries as they serve to promote innovation and interoperability. It further makes products and services more accessible between competitors and users. To put it simply, Shadders likens it to the DVD. If each brand of DVD player has its own format, then DVDs would also come in different formats. For instance, if someone’s Sony DVD player gets broken and they buy a new Samsung DVD player, then they would not be able to use their existing DVD collection. They would have to buy a new set of DVDs compatible to Samsung. The same goes for BSV payments.

“Every wallet can implement the existing standard for Merkle proofs—that means they are able to instantly communicate with all of the other wallets that have implemented it, some of which they might not even have thought of. That includes wallets that do not exist yet and may be built in the future,” Shadders explained.

The TSC places importance on community input and recognizes that even though the Merkle proof standard has been published, it can still be revised or even withdrawn own order to keep up with technological updates. Community input is what makes the BSV ecosystem thrive.

“We try to encourage the participants to think about forward compatibility so that they’re not proscriptive about changes that might happen in the future. But it’s quite possible that a standard might simply become unfeasible or obsolete because the surrounding technology has changed, in which case that standard will more than likely be withdrawn and replaced by a new one,” Shadders said.

Read about the full details of the Merkle proof standard here.