To continue the company’s trajectory toward zero-emission flight, ZeroAvia is ramping up its 19-seat aircraft program to decarbonize and revolutionize regional air travel. The company will utilize two twin-engine 19-seat Dornier 228 aircraft – one in the UK and one in the US, provided respectively by Aurigny and AMC Aviation. Both aircraft were previously in service for regional flights in the US and UK, demonstrating the opportunity for carbon reduction on existing routes. 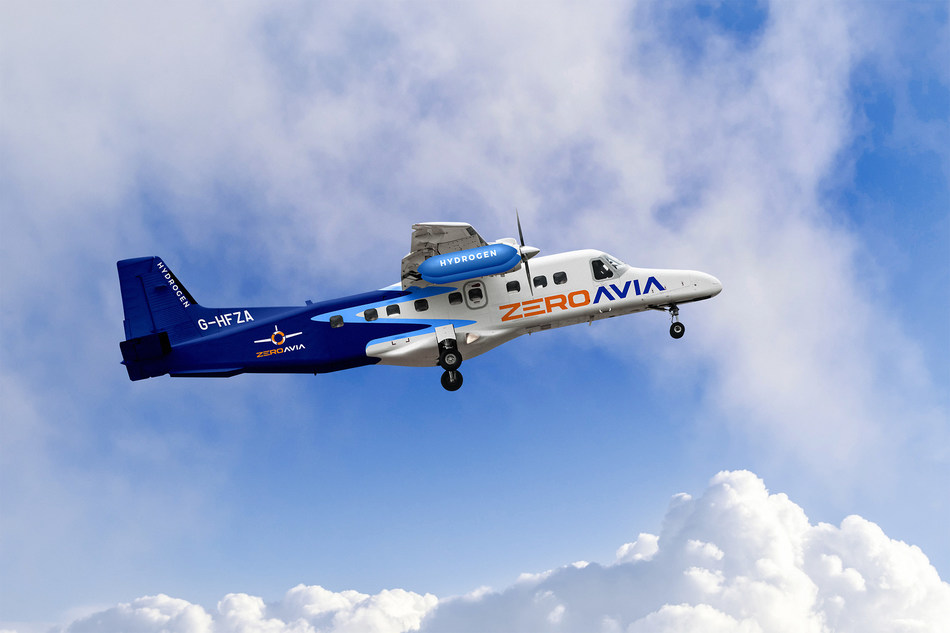 ZeroAvia’s 19-seat R&D is part of HyFlyer II, the second ZeroAvia-led project backed by the UK Government to target the development of a hydrogen fuel cell powertrain. As part of HyFlyer I, ZeroAvia successfully demonstrated a 250kW powerplant in a 6-seat aircraft across three flight test campaigns, achieving all the project’s technical goals, including fuel-cell only cruise flight. All the learnings of HyFlyer I will be fully utilized in the development of a 600kW 19-seater powerplant in HyFlyer II.

“We are eager and ready to begin testing our hydrogen-electric powertrain technology on a larger commercial-size aircraft and grateful to our investors and grant funders for their continued support of our vision for sustainable aviation,” said Val Miftakhov, Founder and CEO at ZeroAvia. “Various projections indicate that aviation may account for over 25 percent of human-induced climate effects by 2050. We are on the path to helping reverse that trend, first with our successful 6-seater testing and now with the R&D for our 19-seater, and the kick-off of our 50+ seat program. Hydrogen is the only practical solution for true climate-neutral flight, and it will become a commercial reality much sooner than many predict.”

“We are delighted to welcome ZeroAvia to our existing portfolio of hydrogen-related technologies,” said Kevin Eggers, Partner at AP Ventures. “We have been impressed with the progress that ZeroAvia has made over the last 24 months – technically, operationally, and commercially. Furthermore, we have become increasingly confident about the significant role of hydrogen in decarbonising aviation. We believe that ZeroAvia will pioneer the development of hydrogen-electric powertrains for the aviation space.”

For the 19-seat aircraft, two 600KW units of the company’s hydrogen-electric powertrain will replace the aircraft’s twin engines, along with hydrogen fuel tanks eventually holding 100kg of compressed gaseous hydrogen to support the 500-mile range of the commercial offering in 2024. Additionally, ZeroAvia is progressing the software, hardware, mechanical integration, and fuel cell balance-of-plant to the certifiable state. The 6-ton aircraft will have a range of 500 nautical miles.

ZeroAvia’s new 30,000-square foot Kemble facility will act as the dedicated base for developing ZeroAvia’s 600kW engine class and marks a significant investment in and expansion of its UK-based R&D program. The company’s Hollister, California location will assist the UK team with testing and will be responsible for building the second demonstration aircraft for commercialization of technology in North America. The company currently employs about 50 people, expanding to over 100 in the next 12 months across both the US and UK.

ZeroAvia has also made several key additions to its team, including its new CTO of Propulsion Dr. Youcef Abdelli, formerly Head of Electrical System and Power Electronics at magniX and Principal Electrical & Propulsion System Chief Engineer for Amazon Prime Air. Also joining the team is new Regulatory & Safety Advisor Sir Tim Anderson, a former Senior Royal Air Force Officer, inaugural Director-General of the UK Military Aviation Authority, Chief Operating Officer of Flybe Group, and Chairman of the UK Airspace Change Organising Group Steering Committee. Finally, Kenneth Braithwaite, the 77th Secretary of the Navy, a retired US Navy Admiral and a Senior Advisor to Summa Equity and Silicon Valley Bank, will be signing on as a board observer.

ZeroAvia is a leader in zero-emission aviation, focused on hydrogen-electric aviation solutions to address a variety of markets, initially targeting 500 mile range in 9-19 seat aircraft used for commercial passenger transport, cargo, agriculture, and more. Based in the UK and USA, ZeroAvia has already secured experimental certificates for two prototype aircraft from the CAA and FAA, passed significant flight test milestones, and is on track for commercial operations in 2024. The company’s expanding UK operations are supported by grants from UK’s Aerospace Technology Institute and Innovate UK, and ZeroAvia is part of the UK Prime Minister’s Jet Zero Council.