Honda’s Alex Palou claimed his second victory of the year today in the NTT INDYCAR SERIES’ visit to the National Park of Speed, Road America.

Palou, driving for Chip Ganassi Racing, started on the outside of the front row and led the final two laps en route to victory. The win puts Palou back in command of the Drivers’ Championship standings, with an 28-point lead over Pato O’Ward, and 53 points over teammate Scott Dixon. 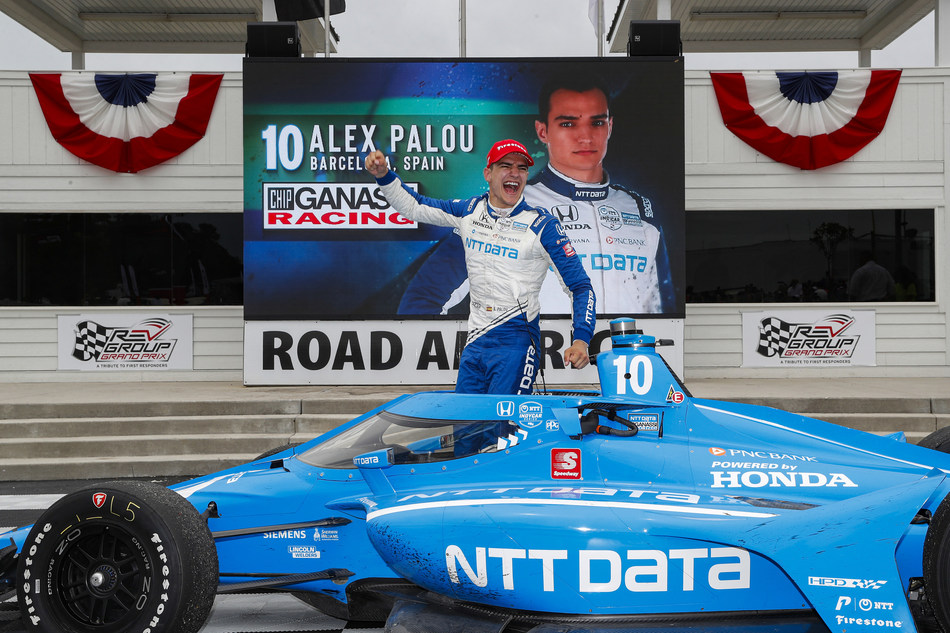 Quotes
Alex Palou (#10 Chip Ganassi Racing Honda) Winner REV Group Grand Prix of Road America, Championship leader: “Oh man, I don’t know what to say. Thank you to all the #10 car crew and team.  It was amazing.  We had a really good car all through the race, right from the start.  Honda and HPD did an amazing job, because we were able to overtake where we needed.  Super happy, and super proud of this Chip Ganassi Racing Team.  I can’t believe it.  Mid-Ohio’s next, right? Let’s get a win there as well!”

Colton Herta (#26 Andretti Autosport Honda) Finished Second: “We were just lacking a little bit of everything today, and that kept us from challenging for the win.  We were going to finish where we deserved.  I think we had third-place pace today, but caught a break with Josef’s [Newgarden] problem.  But the podium is nice, and happy for Gainbridge, and always happy to be powered by Honda.  Big ‘thank you’ to them, and a Honda 1-2, so that’s awesome.”

Romain Grosjean (#51 Dale Coyne Racing with RWR Honda) Finished Fifth: “I think we gained more positions on track [17 passes for position] than anyone else.  We lost some positions on our pit stops, but the car was great.  We found something from yesterday and it was just ‘go for it, right, left, center’ all day long.  It was so cool. I had great fun and enjoyed it a lot, it was a good weekend for us.”

Rebecca Johnson (Director of Production, Honda Performance Development) on today’s Honda win at Road America: “Alex [Palou, race winner] was strong all day long, and was in a position to capitalize at the end when opportunity presented itself, so it was great to see him score a second win this year. It looks like he could have a great future with us in INDYCAR racing. Colton [Herta] had another strong run today, and fully earned his podium finish, while Romain Grojean also featured today, with three Honda teams – Chip Ganassi Racing, Andretti Autosport and Dale Coyne Racing – all getting top-five results here. Now it’s on to Mid-Ohio and hopefully another win on our ‘home ground’.”

Next
The NTT INDYCAR SERIES is back racing at Mid-Ohio Sports Car Course July 2-4 for the Honda Indy 200, Presented by The HPD Ridgeline.