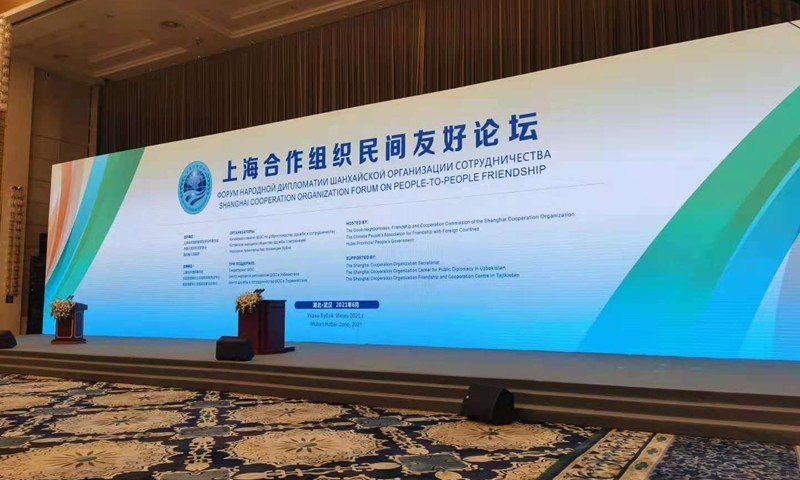 Photo of opening ceremony of SCO Forum on People-to-People Friendship, which was held in Wuhan on Thursday

Speaking at the opening ceremony of the SCO Forum on People-to-People Friendship held in Wuhan on Thursday, officials and experts also reached a broad consensus on carrying forward the “Shanghai Spirit”, deepening solidarity and collaboration, maintaining peace and stability of countries in the region, promoting common development and making greater contributions towards building a community with a shared future for humanity.

The Forum was co-organized by the Good-neighborliness, Friendship and Cooperation Commission of the SCO, the Chinese People’s Association for Friendship with Foreign Countries, and Hubei Provincial People’s Government.

The Forum realizes that the SCO plays a pivotal role in respecting diversity of civilizations, supporting the people of all countries in independently choosing the path for development, establishing equal partnerships, safeguarding peace and stability of our region and promoting common development. The SCO has become a comprehensive regional cooperation organization uniting 18 countries and a population of over 3 billion.

The Forum spoke highly of the non-governmental organizations of SCO countries for their solidarity and mutual assistance in the fight against COVID-19, and underlined that only through solidarity and cooperation can the international community overcome global challenges such as COVID-19 and safeguard the common home of mankind. It supports practical cooperation, deep integration of industrial, supply, and value chains, unimpeded regional economic circulation, and more cooperation in areas such as digital economy, e-commerce, artificial intelligence and smart city with a view to improving people’s well-being and building a green and open regional economy characterized by innovation and coordination and shared by all.

The Forum encourages greater mutual learning between civilizations, good-neighborliness and friendship among countries, and the involvement of women, youth, children, and other groups in fruitful bilateral and multilateral exchanges and cooperation in culture, education, academic research, sports, media, tourism, science and technology, health, traditional medicine, folk arts and crafts, and environmental protection to form an all-dimensional, in-depth, and multi-channel cooperation framework.

The Forum believes that non-governmental organizations need to be more active in facilitating communication, reflecting the will of the people, and pooling together people’s efforts. It highly praises the non-governmental organizations of the SCO countries for expanding partnership networks, leveraging their own strengths, promoting friendly cooperation, and making concerted efforts to enhance policy, infrastructure, trade, financial and people-to-people connectivity.

The Forum proposes that non-governmental organizations of member states, observer states and dialogue partners take the 20th anniversary of the founding of the SCO in 2021 as an opportunity to deepen mutual understanding and traditional friendship and actively promote the cause of people-to-people friendship of the SCO in the post-epidemic era. China is willing to jointly hold activities to facilitate people-to-people friendship and promote the building of a community of health, security, development, and humanities together with the Indian Council of World Affairs, Kazakhstan’s Children’s Fund, Kyrgyz’s National Assembly, China-Pakistan Study Center of the Institute of Strategic Studies Islamabad, Pakistan’s Institute of Peace and Diplomacy, Russia-China Friendship Association, Russian Children’s Fund, Tajikistan’s Association for Friendship with Foreign Countries, the Shanghai Cooperation Organization Friendship and Cooperation Centre in Tajikistan, the Shanghai Cooperation Organization Center for Public Diplomacy in Uzbekistan, Afghan’s Women’s Education Center, Belarus’s Association for Friendship with Foreign Countries, Iran-China Friendship Association, Mongolian Peace and Friendship Organization, Azerbaijan’s Heydar Aliyev Foundation, and Armenia’s China-Eurasia Center for Strategic Studies.

The Forum believes that sub-national cooperation provides a solid foundation and source of strength for the long-term friendship between countries. It also functions as a propeller for friendship among peoples. All countries should, on the basis of equality, openness, justice and mutual benefit, take the opportunity of the Forum to carry out friendly exchanges and win-win cooperation at the sub-national level in various fields, promote personnel exchanges and cooperation facilitation, and boost the establishment of sister provinces, states, and cities.

The Forum suggests that Hubei and SCO countries strengthen pragmatic cooperation in fields such as trade, logistics, conventions and exhibitions, infrastructure, and health. To this end, it suggests first establishing a China-SCO Health Cooperation Demonstration Area in Hubei Province and setting up a China-SCO Friendship Expo Park in Wuhan City. It will promote the establishment of a “house of friendship” for SCO non-governmental activities in Wuhan City, and suggests that member states, observer states, and dialogue partners also establish their “house of friendship”.