Luminex Resources Corp. is pleased to announce the discovery and planned drilling of the Company’s Nayumbi target at its Condor project. The target is an epithermal gold-silver anomaly located in the southern part of the Condor project claim block (Figure 1). Recent rock chip samples from historic mine workings at Nayumbi returned high gold and silver grades, up to 80.5 g/t gold and 14.4 g/t silver. Widespread hydrothermal brecciation, epithermal veining and alteration was identified by Luminex geologists. 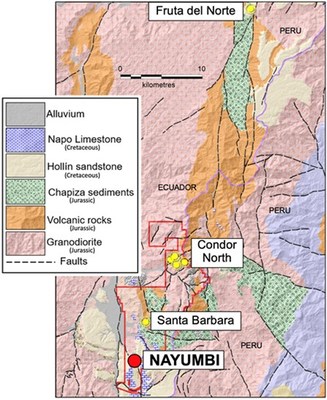 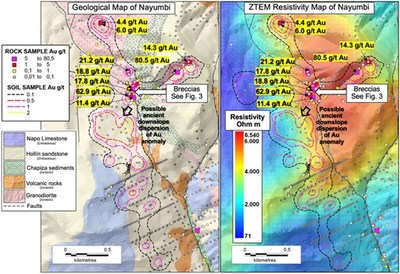 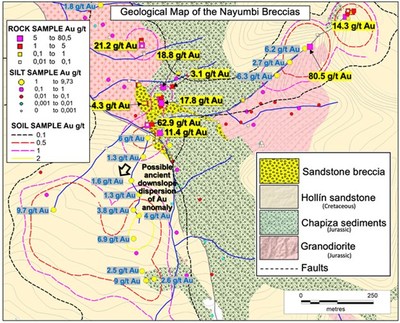 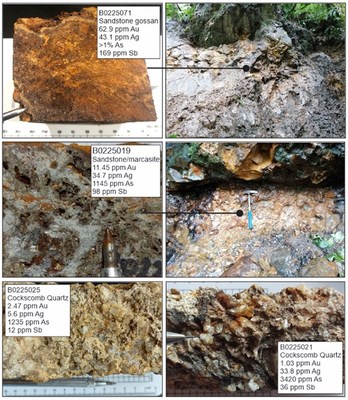 Since the initial sampling, the area has been geologically mapped and a soil sample grid of 193 samples collected by Luminex and 989 legacy samples taken by a previous operator, for a total 1,182 samples, has outlined a 3.5km long, irregular gold anomaly oriented in a north-northwest to south-southeast direction when contoured at 0.1 g/t gold. Ancient downslope dispersion of the soil gold anomaly to the southwest is interpreted to have occurred in the Cretaceous period, when the area was tilted in this direction.  Additionally, a property wide ZTEM survey had identified a north-northwest oriented structure that extends from surface to a depth of 1,500m. This structure is at least 2.5km long that juxtaposes conductive rock to the west against resistive rock to the east and is interpreted to have focused ascending mineralizing fluids (Figure 2).

Contained within the soil anomaly and lying on the structure defined by the ZTEM survey, geological mapping has delineated a northeast pointing wedge-shaped hydrothermal breccia in sandstone approximately 170m long and 130m wide at the southwest end (Figure 3). This lies within a discontinuous trend of similar breccia bodies that extends over 450m in length and contains historic gold workings. The breccias are hosted in sediments of the Chapiza Formation, the same cover rocks as those at Fruta del Norte, and contain abundant epithermal quartz veins with marcasite. The largest breccia body has returned up to 62.90 g/t gold and 43.1 g/t silver in rock chip sampling of outcrop. This area will be the focus of the initial drill program at Nayumbi.

Geologically and geochemically Nayumbi can be characterized as a low sulfidation epithermal gold-silver prospect that is interpreted to have formed in permeable breccias and sandstones, around a feeder structure that channeled mineralizing fluids from depth. Similar gold targets exist elsewhere on the property and these are being actively explored. Luminex is finalizing permitting and drill access and expects drilling to commence in June or July.

The geological setting of Nayumbi as well as its surface geochemical and geophysical signature are very similar to one of the world’s highest grade gold mines, Lundin Gold’s Fruta del Norte mine, which hosts resources of 7.4 Moz gold, Indicated resources at 9.61 g/t gold and 12.9 g/t silver and 2.1 Moz gold in Inferred resources at 5.69 g/t gold and 10.8 g/t silver. Fruta del Norte is located some 45km to the north-northeast of Nayumbi, along the same regional fault system.

Leo Hathaway, P. Geo, Senior Vice President Exploration of Luminex and the Qualified Person as defined by National Instrument 43-101 Standards of Disclosure for Mineral Projects, has reviewed, verified and approved the scientific and technical information in this news release and has verified the data underlying that scientific and technical information.

Luminex Resources Corp. is a Vancouver, Canada based precious and base metals exploration and development company focused on gold and copper projects in Ecuador. Luminex’s inferred and indicated mineral resources are located at the Condor Gold-Copper project in Zamora-Chinchipe Province, southeast Ecuador. The Company is currently drilling its 100% owned Cascas project. Luminex also holds a large and highly prospective land package in Ecuador, including the Tarqui and Pegasus projects, which are being co-developed with BHP Group plc and Anglo American respectively.

Further details are available on the Company’s website at https://luminexresources.com/.

To receive news releases please sign up at https://www.luminexresources.com/contact/contact-us/.