Addis Ababa [March 1, 2021] – The Shankoru family is saddened to announce that Mr. Fanuel Shankoru passed away on February 6, 2021. With Mr. Fanuel residing in our hearts and memories, we are keen on completing his journey of re-discovering the truth to help the masses remember God and be His witness.

Ethiopia’s history is not as well known today as it was in the past. A Levite descendant named Shenkoru Woldeyes (Abajegel) compiled the wisdom bestowed upon him to pass it on to his children. He is the father of ‘the Kid,’ the last descent of noble bloodline. He descended from the beta zebehere Lawawiyan priest family.

Shenkoru’s father, Aba Woldeyes, grandfather of the Kid, served as a warrior priest of Ethiopian Orthodox Church and and Menelik’s staff member. At the battle of Adwa on March 2, 1896, he showed that bullets could not make him fall. He was the warrior who hosted the Ethiopian flag on top of Adwa Mountain when the bells of victory rang in Adwa in 1896. 24 hours before the war began in March 1, twelve holy monks of the church of Ethiopia from secret location declared a victory and made special prayer on the name of Aba Woldyes’s. The holy man’s Christian name is Woldeamelak. The picture below shows a scene from the battle of Adwa.

“Freedom is the single most important contribution Ethiopia offered symbolically to the entire world… those who sacrificed their lives in defense of their freedom of all black peoples across the planet.” – From Aba Woldeyes diary.

In the right corner of the picture, draped in black, King Menelik is seen riding a horse, followed by high-ranking government officials. In the far left corner, an old man is seen wearing a white SKUFIA, a symbol of priesthood, and holding a long stick. He is Aba Woldeyes/ WoldAmlack, the father of Shenkoru, and the Moses of the war. He came from the indigenous Ethiopian who lived in the Source of Gion [Blue Nile] for thousands of years, from the ancient priesthood of Ethiopia.

He is also the keeper of the ancient knowledge of the cosmos. The stick that the leading man holds is the same size and weight as the stick of biblical Moses. He also used the stick to stop the floodwater, allowing the warriors to cross the flooded river.

As seen in the picture, the grandfather of the Kid leads the Battlefield presenting the true Ark of the Covenant. The ark was present in that war and he carries it in a very mysterious way.

At this time, the grandfather carried another powerful object. The holy object is very special and only two of them exist. One is on a Greek island, Mt. Athos, the most secret spot on earth, and spiritual capital of orthodox Christians. Under Byzantine Empire time Clock.

The family also has a part of the Garment worn by the Holy Virgin Mary mother of our God Jesus. The second one remains in the family of the kid, handed down for 2000 years. The fabric worn by Holy Virgin Mary is also Ethiopian flag, which come from Jerusalem in year 34AD.

In the photograph above, everyone, including King Menelik, is seen following Aba Woldeyes. Behind Aba Woldeyes, walks the religious leader of the lost tribe of the Hebrew Dan family from Qwaara, holding a gun on his left shoulder and dressed in clean white clothes, and Sheikh Ali Musa of Wollo.

Prince Ras Makonnen is also seen. The man on the first horse on the left was the favorite warrior. He is the leading officer of the war. He was imperial Hilslasse father, followed by the warriors from the eastern Somali region. On the far left corner, hundreds of women warriors march behind the leader.

Initially, Aba Woldeyes served as the head of the ancient Tana Kirkos Monastery in Gojjam. He was known as the descendent of the wise. About 2000 years ago, 18 years after King Bazin’s coronation, his ancestors have made a prophecy about the coming of Jesus, about his birth, and Ethiopians who had been leading King Bazin by counting stars. Since then, religious knowledge has been passed down through generations. 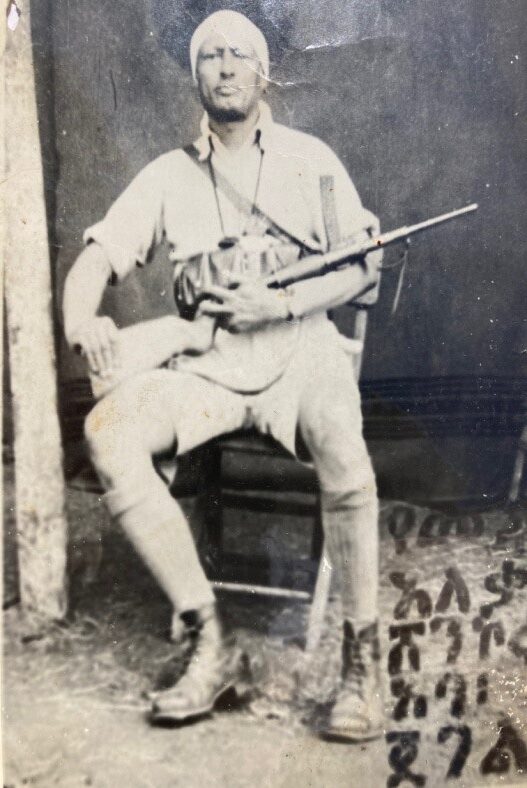 Shenkoru (Abajegel), the 76th descendant of this family left the religious document (parchment) to one of his eight children. The successor, just like his forefathers, headed to Sekela in Gojjam to learn the Geez language, poetry (kinae), and Ethiopian hymn book. However, owing to the change in regime and the fact that the new regime was anti-religion, he returned to Addis Ababa without completing his studies.

Shenkoru served the church as a religious authority and mobilized the people against enemies who acted against Ethiopia. In 1936, when Italy invaded Ethiopia, Shenkoru fought for five years. He was shot several times but would not fall. It was said that man possessed a shield that saved him from many things, including a spear.

His son, who inherited the history, also encountered numerous challenges but is committed to the country’s sovereignty. It is said he died more than seven times but survived the death due to his spiritual power and miracle. Currently middle-aged, he goes by many names, including the biblical name, ‘Melchizedek,’ ‘The Last Kid,’ or simply ‘The Kid’ owing to his status as the last of the Levite bloodline.

From many of Aba Woldeyes grandsons, he is the one who went missing 44 years ago. He was shot 17 times but survived, and captured by communist guards. His father paid for the 17 missing bullets to the government for his release. He was only 14.

Many family members didn’t see the Kid. However, he has returned when he heard the news of Fanuel Shankorou’s, his beloved younger brother, passing away.

“Ethiopians shall bow before him and his enemies shall lick the dust” – Psalm: 72

He is the one chosen to possess a treasure trove of knowledge, which contains all that humanity needs to guide itself along the turbulent waters. He is now to be revealed. He didn’t want to go to the grave and think “YOU SAID NOTHING” for all of us.

He strongly believes that the story will inspire others. It is his wish to pass the heritage back to the people and reveal stories that were not told but only relayed among those of the noble bloodline.