A woman stands outside a yurt in Ger District, Ulaanbaatar, Mongolia. There is power plant nearby but the government says it aims to reach net-zero emissions by 2050. Courtesy: CC BY-SA 4.0/Nathalie Daoust

BHUBANESWAR, India, Jan 26 2021 (IPS) – Climate warming is believed to have taken place at some of the fastest rates in the world in Mongolia, raising the country’s average temperatures by 2.24°C between 1940 and 2015, with the last decade being the warmest of the past 76 years.

In the Gobi Desert, the occurrence of dust storms increased from 18 to 57 days between 1960 to 2007, and in 2000 almost half a million people were affected by drought. The north-eastern Asian country’s northern region is expected to become more arid over this century as annual precipitation decreased by 7 percent over the past 76 year despite an increase in winter rains. In addition to the drying landscape, changes in water availability is a serious, growing concern.

Between 1999 and 2002, and again between 2009 and 2010, Mongolia was hit by a series of extremely harsh winters or dzuds that resulted in the death of around 10 million of an estimated 44 million livestock population. The extreme cold and coating of icy snow can prevent animals from getting to their pasture and causes mass deaths. Nearly 70 percent rangeland pastures are degraded, according to the Japan International Cooperation Agency (JICA).

This is a major push factor for the huge migration of traditional herders of camels, yaks, goats, and sheep into Ulaanbaatar, Mongolia’s capital city on the banks of the Tuul River in the north-central portion of the country. Urban availability of better health, education and market facilities add to the rural migration.

In traditionally dry Mongolia, flash floods have become a new feature. As warmer air has a higher capacity to carry moisture in the form of water vapour, global warming is already causing extreme rainfall events. In summer, Mongolia’s 2.24°C higher temperature is melting the snow faster, thawing the permafrost, so much so that it is not just the vast Gobi Desert in the south which is affected, but devastating flash floods have reached Ulaanbaatar, destroying roads and houses on its way, according to Zamba.

These natural hazards occurring from shifts in climate dynamics frequently affect Mongolia with high loss and damage to agriculture and livestock sectors, hampering poverty reduction efforts, causing economic shock, and contributing to unsustainable rural to urban migration. With a per capita income of $4,295, Mongolia was ranked 106th globally, according to the World Bank.

According to Mongolia’s Ministry of Environment and Tourism, the government has been undertaking a number of measures, which include:

The central element for implementing the Paris Agreement are the NDCs of each of the 196 Parties to the climate convention. NDCs are national climate plans highlighting climate actions, related targets, policies and measures governments aims to implement in response to climate change and as a contribution to global climate action.

Mongolia is engaged closely with international efforts to mitigate climate change and its impacts. It is one of the 63 countries that is being supported by the Climate Action Enhancement Package (CAEP), an initiative of the NDC Partnership (NDCP) with financial and technical assistance not only to submit enhanced NDCs but to also fast-track their implementation.

Mongolia’s NDCs, outlining and communicating their government’s post-2020 climate actions, was approved in November 2019. In it, Mongolia intends to reduce its greenhouse gas (GHG) emissions by 22.7 percent by 2030, compared to the business-as-usual scenario. This goal excludes land use, land-use change, and forestry (LULUCF). To reduce emissions, it will focus on the energy sector, namely energy production, energy consumption and transmission loss. In the non-energy sector it will focus on agriculture, industry, and waste-to-energy.

Adaptation in the livelihoods sector, especially in nature-based solutions to water conservation, is also highlighted in the NDCs.

“In addition, if mitigation measures such as carbon capture and sequestration; waste-to-energy, technologies, which are few with developing nations are implemented under international financial mechanism and technical support, Mongolia could achieve a 27.2 percent reduction in total national GHG emissions,” Zamba told IPS.

After Mongolia’s new national government came to power in June 2020, the drive to mitigate climate change has been increased via an inter-sectoral integrated climate action plan involving as many as nine ministries.

The CAEP has also helped on various fronts, making Mongolia’s climate actions more robust and inter-sectoral. Under the CAEP, the Mongolian government has partnered with the Food and Agriculture Organisation of the UN (FAO), the Asian Development Bank (ADB), UN Environment Programme (UNEP), the Global Green Growth Institute (GGGI) and the Stockholm Environment Institute (SEI), among other institutions over the course of 2020 and 2021, according to ministry sources.

“The CAEP has facilitated to integrate NDC implementation into our national action plans and strategies. Mongolia aspires to reach net-zero emission by 2050,” Zamba said.

Enkhbat Altangerel, Director-General of Mongolia’s Ministry of Environment and Tourism, told IPS via email: “Mongolia has joined the NDC Partnership in 2017 and since has been an active member. A number of significant achievements were attained within the frame of the cooperation, such as a partnership plan which was developed and approved, NDC Partners’ online and coordination platform was established. This was a pioneering measure in the field and currently the platform functions as the main NDC coordination and tracking mechanism at the national level.”

Private sector engagement is essential and prioritised in the implementation of climate policies said Altangerel. Already two private sector commercial banks, XacBank and the Trade and Development Bank, are designated as Accredited Entities for the Green Climate Fund (GCF) and are able to disburse GCF-provided green loans to large solar projects. The government has also proposed a Mongolian Green Finance Corporation in cooperation with GCF, which will become the main national green financing body.

Implementing the 2019 NDC till 2030, inclusive of mitigation and adaptation plans, is calculated to cost $11.5 billion, Zamba told IPS. 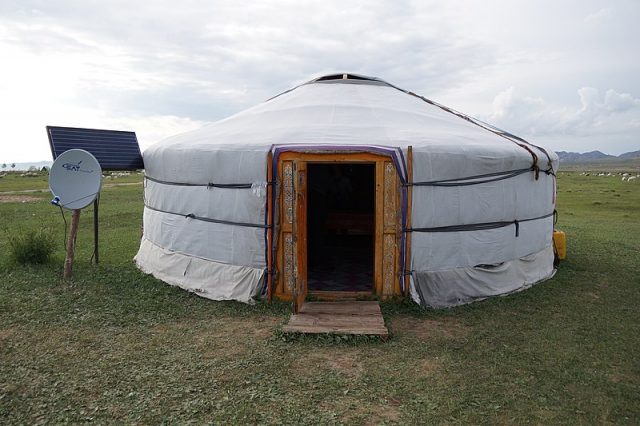 A yurt in Mongolia with a solar panel that provides electricity and also connects the satellite tv. Courtesy: CC By 2.0/Niek van Son

Speeding towards renewable energy in the Land of Eternal Blue Sky

With between 220 and 260 clear, sunny days each year, Mongolia is called the Land of the Eternal Blue Sky. The country’s combined wind and solar power potential is estimated by the ADB to be equivalent of 2,600 gigawatts (GW) of installed capacity or 5,457 terawatt-hours of clean electricity generation per year. The amount is enough to meet the country’s energy demand of around 1.2GW as of 2018 and allow it to still export the remaining, yet currently Mongolia’s coal-dependent energy sector emits two-thirds of its GHG. Coal being cheap and plentiful, coal-fired thermal power plants accounted for a total of 96.1 percent of the total electricity supply in 2015.

But that’s about to change.

“The most emitting sectors are energy and agriculture,” admits Altangerel, “but renewable energy is where our key mitigation achievements are, so far.”

From a current renewable mix of 20 percent share in total electricity generation dominated by wind and solar, with hydro and geothermal, it is targeting a total 1,356 MW or triple the current installed capacity by 2030.

To reduce dirty power generation, Mongolia will also install its first large-scale advanced battery energy storage system in partnership with ADB, facilitated by CAEP. Renewable is also set to provide urban heating in Mongolia’s bitter winter where coal, wood and even rubber tyres are used by the urban poor.

The private sector engagement is essential in implementation of climate actions said Altangerel.

“We are not asking the private sector to help; we are coercing them. With incentives of course!” Zamba half-jokingly adds. In developing economies public-private partnerships (PPP) are essential, with governments being resource constrained.

The government has prioritised cooperation with the private sector in implementing the NDCs and relevant policies.

After XacBank, one of Mongolia’s large commercial financial institutions in 2019 became the first private sector Accredited Entity for GCF, the bank disburses GCF-provided green loans to large solar projects. The Trade and Development Bank is the second bank to be designated Accredited Entity for GCF. Mongolia has also proposed a Mongolian Green Finance Corporation in cooperation with GCF which will become the main green financing national body.

“Considering the efficiency and rapid process of the CAEP programme, our government is further planning to extend its collaboration with NDC Partnership at sectoral level for the implementation of sector-specific NDC targets and activities,” Altangerel told IPS.