TORONTO, ONTARIO, January 14, 2021 – Personas Social Incorporated (TSX.V: PRSN) (the “Company” or “Personas”) is pleased to provide a corporate update on annual sales increases on the Peeks Platform, which is one of the key revenue driving platforms that Personas offers in the social media and communications markets.

The Company launched its Peeks 2020 Reboot initiative in January 2020 with an aim to reverse the Company’s declining revenues, improve the Company’s reputation and increase the quality of service to its users.  The Company is proud to report that these efforts were an overwhelming success.

Prior to the 2020 Reboot initiative, the Company paid its streamers on average approximately every 60 days.  These 60-day payouts were amongst the slowest payout cycles in the industry. Due to improved payment processing services and more efficient back offices processes, the Company now has one of the fastest payout cycles in the industry averaging approximately 3 days.

Of note, the Company recently changed its fiscal year from February 28 to December 31.  Accordingly, the information presented in the discussions below relate to a comparison of the corresponding calendar periods in 2019 and earlier vs. the Company’s fiscal periods for 2019 and so the figures presented will not tie directly to the Company’s historical financial statements that have been filed on www.sedar.com.

For the purposes of this press release, the Canadian dollar amounts were calculated at the annual average exchange rate for the year 2020 which is used herein as $1.34 CAD to $1.00 US dollar. ‘Gross Sales’ are the total sales processed by the company in a given period, ‘Net Sales’ are the Gross Sales minus payment processing fees, and ‘Net Income’ is the gross fees earned by the Company for the use of its platform by streamers and viewers.  The actual audited Gross Sales, Net Sales and Net Income numbers will vary from the numbers reported herein due to, but not limited to, fluctuations in foreign exchange at the time of transactions and at the time of settlement of funds to the Company and variations in payment processing fees. 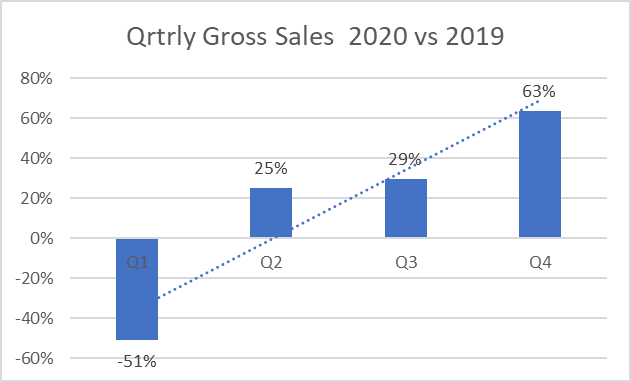 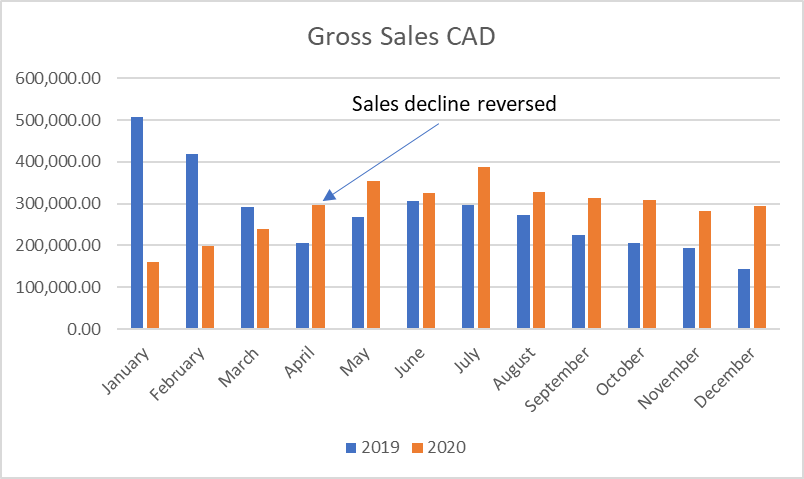 Sales accelerated in Q4 2020 as compared to calendar Q4 2019 to an average 67% growth; with the month of December 2020 representing a 106% sales growth over the same period in the previous year.

As part of our on-going efforts to provide our users with the industry’s best quality of service, the Company significantly reduced the fees charged to streamers in Q4 2020.  The Company waived the streamers platform fees on two of its three categories of streaming. This allowed streamers to earn an income from the Company without paying fees in 2 of its 3 streaming services. The Company was able to waive fees and still derive revenues from the streamers because the Company can earn approximately 24% per transaction from the purchase of its coin packages.  Coin packages are prepaid packages of utility tokens that are used to purchase content on the Company’s livestreaming platform.  The combination of lower fees and faster payouts now provides streamers on the Company’s live streaming platform, with a quality of service that is one of the best in the livestreaming industry.  Competitive services such as Only Fans, charges its users 20% for the use of its platform and provides its users payment cycles of approximately 45 days on average.

The Company experienced growth in both Gross Sales and Net Income in 2020 compared to 2019 while simultaneously lowering Expenses.  Q4 2020s Expenses were paid for out of the Company’s cashflow and did not require additional loans or investments from the Company’s CEO or investors.  Detailed Expenses will not be provided in this update and will instead be released upon the completion of the audit and reporting for the fiscal year ended December 31, 2020.

Notwithstanding the Company lowered its fees, the Company’s Net Income still increased 42% in Q4 2020 compared to Q4 2019; with December 2020 representing an 84% increase over the previous year. 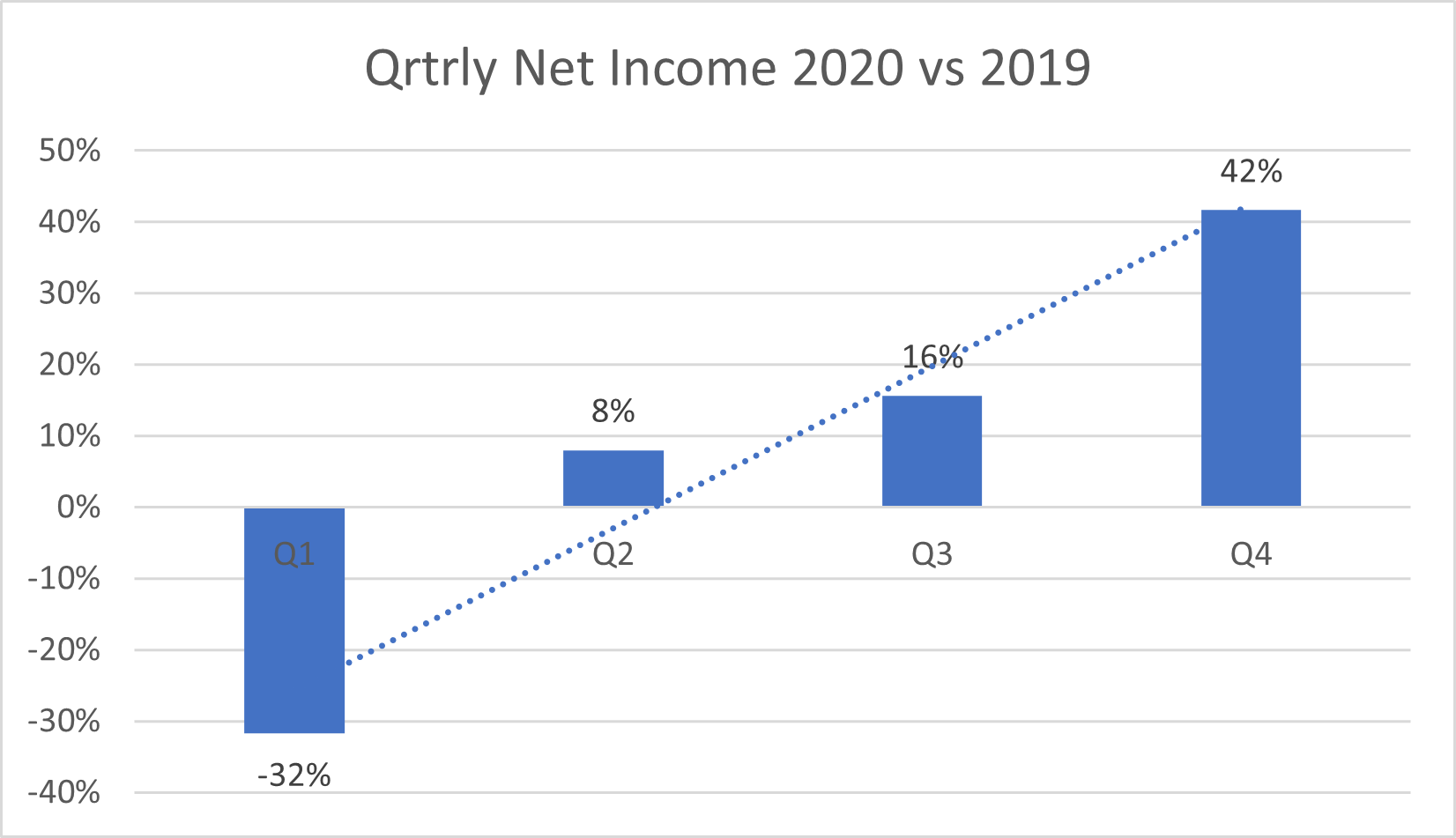 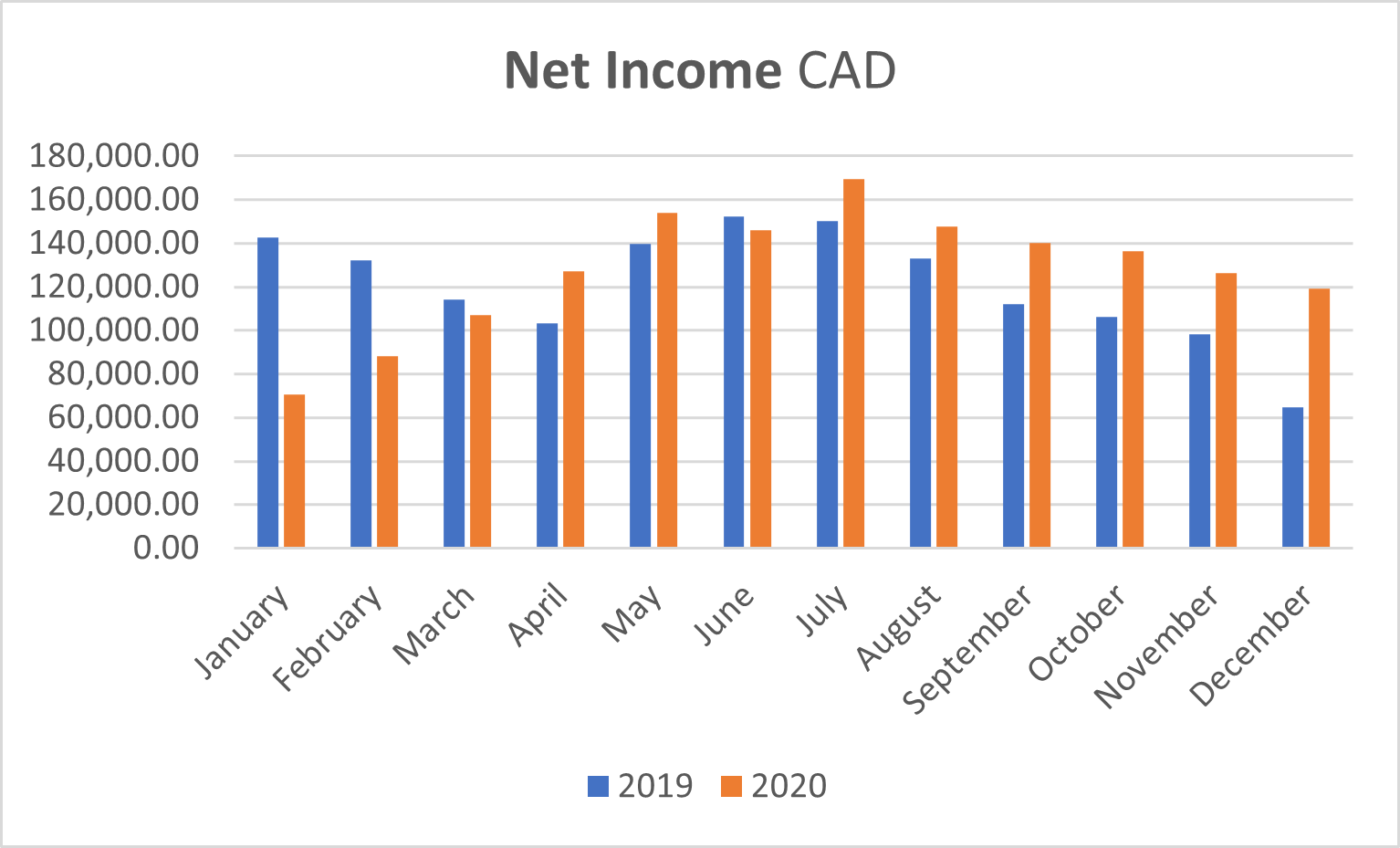 All figures are unaudited and are subject to completion of the audit and reporting for the fiscal year ended December 31, 2020.

The Company has been pleased with its performance in 2020.  User feedback has been overwhelmingly positive.  In so far as user fees and payout cycles are concerned, the Company is now offering its users a superior service to industry leaders such as Only Fans.  Management continues to see sales trends improve and is planning on more aggressively promoting the service in 2021.